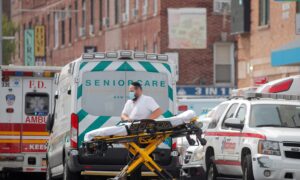 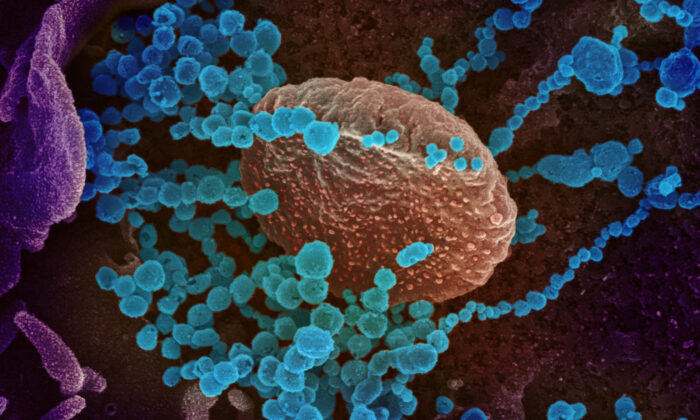 Scanning electron microscope image shows the CCP virus (round blue objects), the virus that causes COVID-19, emerging from the surface of cells cultured in the lab. (NIAID-RML)
PUBLIC HEALTH INFORMATION

A new study (pdf) indicates that the CCP Virus could cause a patient’s immune system to attack the tissues in their own bodies.

The study, which was recently released as a preprint on Oct. 23, has yet to be peer-reviewed.

“We describe the alarming finding that in the sickest patients with COVID-19, autoantibody production is common—a finding with large potential impact on both acute patient care and infection recovery,” Matthew Woodruff, one of the authors of the study, wrote in science alert.

An autoantibody is a type of antibody in the immune system that attacks one’s own cells and molecules, and causes several autoimmune diseases.

Woodruff stated that one of the aspects of the study was to discover more about antibodies, and more specifically, autoreactive antibodies, which target tissues of severely sick patients infected with the CCP (Chinese Communist Party) Virus instead of the actual disease-causing microbe.

They were first found when infected patients admitted to the Intensive Care Unit (ICU) started developing blood clots, and more recently, may have some connection to the impairing of the antiviral immunity, according to a study published in the American Association for the Advancement of Science.

The study, conducted by the Lowance Center group, analyzed 52 severely infected COVID-19 patients who were in ICUs, none of whom had any history of autoimmune disease or disorders.

When these patients were tested for autoantibodies, the researchers discovered that 59 percent tested positive. Moreover, among those with the most C-reactive protein, a protein made by an individual’s liver as a response to inflammation, over two-thirds displayed signs that their immune system was attacking their own cells.

Woodruff brought up an example of autoantibodies, and compared the reaction to that of lupus, which creates autoantibodies that attack the patient’s DNA.

“It could be that severe viral illness routinely results in the production of autoantibodies with little consequence; this could just be the first time we’re seeing it. We also don’t know how long the autoantibodies last. Our data suggest that they are relatively stable over a few weeks. But, we need follow-up studies to understand if they are persisting routinely beyond infection recovery,” Woodruff said.

Testing patients for autoantibodies could help to identify patients who are suffering from the same issues, and that way, medical personnel could react in a timely fashion to apply treatments.

“By testing patients immediately following COVID-19 recovery, we can establish baselines and begin to track the possible emergence of new cases of autoimmunity following this terrible disease, and plan early rheumatological intervention if needed,” Woodruff said.