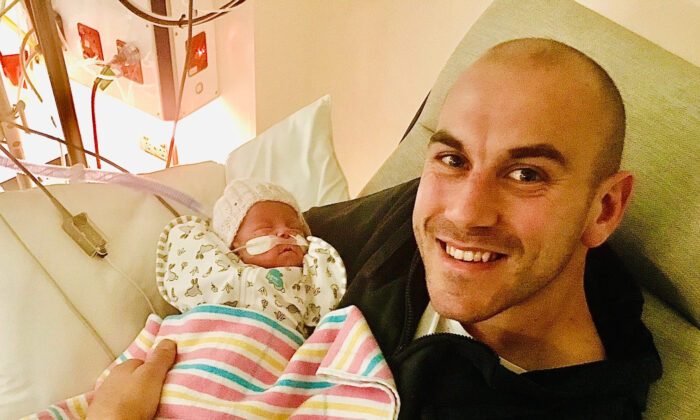 Joel Mackenzie in the NICU at the Women's and Children's Hospital in Adelaide, bonding with his tiny preterm daughter, Lucy. (University of South Australia)
Children

They examined the experiences of a group of fathers holding their premature and critically ill term babies against their bare chest in a pouch-like position.

Kangaroo care mimics the way marsupial mothers hold the joey close to their heart, providing the baby warmth and security within the mother’s pouch.

Mothers would also hold their newborn babies against their bare skin for as long as possible each day to nurture their development and bond with them.

While this model is replicated in newborn wards worldwide, registered nurse and UniSA Masters candidate Sophia Dong says little data is known about the benefits for fathers.

During kangaroo care, the direct skin-to-skin touch activates nerve receptors that spark certain hormones, reducing pain and stress for the baby and caregiver.

A Taiwanese study had previously found that most newborn research has typically focused on the mother and her newborn, excluding the benefits and functions of the father.

The researchers also found a positive correlation between dads who used kangaroo care and the father-child relationship and recommended the expansion of the practice to dads.

“Expanding the skin-to-skin care approach to fathers may be an effective healthcare strategy that helps new fathers develop self-confidence and adopt a more active and positive outlook on their transition into fatherhood,” the paper said.

Joel Mackenzie says he bonded with his 540-gram premature daughter by holding her against his chest two weeks after she was admitted to the newborn intensive care unit.

“Holding her for the first time was one of the best experiences of my life. It’s a chance that most fathers don’t get, and I thought it was important for her development,” Mackenzie said.

“I was able to hold her for a couple of hours each day and I think that helped her get to know me and vice versa.”

“It was good therapy for me, too, because I felt that I was contributing rather than just being a bystander.”

“Lucy settled onto my chest immediately and would hold my hand and pull my chest hair. It was reassuring that she was strong and that she knew my smell. It made me feel more loved than I have by any other person on this planet.”