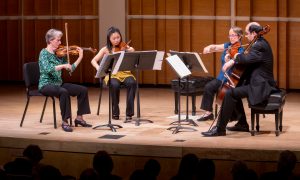 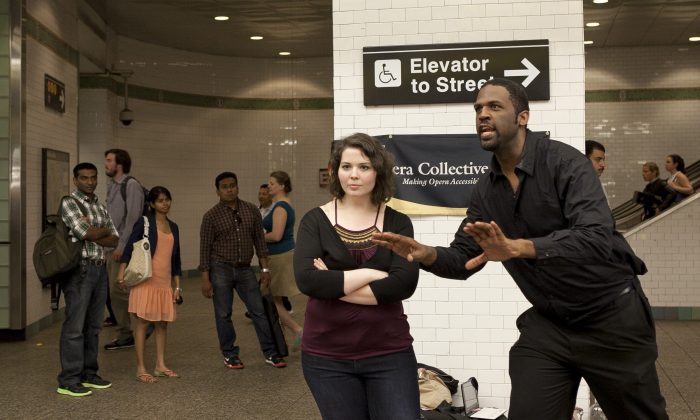 NEW YORK—Quentin Lee, a towering black man takes a step forward on the mezzanine of the Times Square underground station. He pauses for a moment before letting out a booming voice, resounding off the surrounding concrete. He sings the “Votre Toast” from Bizet’s “Carmen,” shocking passersby.

The rich vibrato of his baritone voice carries to the tunnels, despite the clamoring from riders at one of New York’s busiest subway stations. As usual, most do nothing more than turn their heads as they hurry on to their destination.

Yet a small crowd gathers to watch. Every so often, someone is moved to tears.

“It’s happened on more than one occasion,” she said. “People come up all the time, and say you’ve brought tears to my eyes. I have no idea what you were just saying, but it was just so beautiful.”

Lee and Kasarjian were both performing at an Opera Collective event inside a subway station on June 11.

Founded in 2005, Opera Collective is a small organization of opera singers who, between performances at venues such as Carnegie Hall, Lincoln Center, and New York Lyric Opera House, take time to bring opera to the general public for free.

Although they only have 10 members, the group feels that if their singing can move just one person who had never listened to opera before, then it would be time well spent.

Opera is a dying art, perhaps more so than any other classical art form. Two percent of U.S adults attend operas, according to a 2008 survey from the National Endowment for the Arts (NAE). From 2002 to 2008, opera attendance declined by three percent. When ranked amongst art museums, plays, classical music, jazz, ballet, and Latin dance, opera has one of the lowest levels of attendance.

The Opera Collective aims to break down stereotypes associated with opera for as many people as they can reach.

Sure, opera is often sung in a foreign language, and audiences don’t know the precise meaning of the lyrics, but there is something soul-stirring when a professional opera singer steps into a begrimed subway to perform.

“At first I thought it would be demeaning,” Lee said. “But the subway is nice because the people who stop, really want to stop.”

New Yorkers are perpetually rushing off to work, meetings, and social events.

There is a moment of perplexity as one passes them. Why would someone sing opera in the subway?

But many captivated New Yorkers soon realize that what they are hearing is beautiful, even those who have never previously been interested in opera.

“It’s such a basic human way to communicate, through song. It’s a pure art form … that makes a visceral connection with people,” Kasarjian said. “It’s important for us to keep that alive.”

“It’s very touching. A lot of people stop and say ‘I’d never thought I’d like opera, but I love it,’” she said. “It’s very important to bring it to people who wouldn’t otherwise get to hear it.”

Opera Collective also does educational outreach programs in New York and Connecticut. They book paying gigs at restaurants, receptions, weddings, and art events when they are not singing underground.

Some members are novice singers building their experience and repertoire, and some are freelancers. The group serves as a warm environment for the singers to receive constructive criticism and earn a little extra cash.

Since 2005, Opera Collective has developed a small but loyal following.

“Sometimes we see the same people at different locations,” said Kasarjian. “Obviously we can’t reach everybody. But there are people that now follow us on Twitter and Facebook who said they have never had a desire to see opera before.”

This past November, the group held auditions for the first time. Thirty people came to audition.

The pay is not much. They make around $50-100 for each three-hour performance in the subway. The performers split the tips.

Times Square is the best tipping location; Columbus Circle may be the worst.

“A lot of this is volunteer,” Kasarjian said. “Some people are away on traveling shows. But whenever they’re in the city, they come back and do this.”

“It means a lot to me to have these friends so supportive of me and my singing,” said Carla Wesby, one of the founders the organization.

“Opera needs to get out there more; otherwise, it would die completely,” she said.

“Some people stand there and cry. Some people will make fun of you, but that’s always a chance you take when you perform underground,” Wesby said.