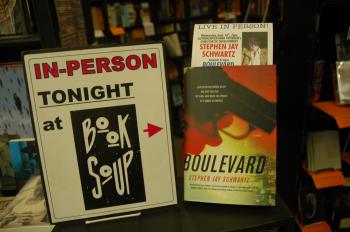 BY Masha Savitz TIMEDecember 16, 2009 PRINT
LOS ANGELES—Book Soup, the noted indi bookstore on Sunset Strip, was not only filled to capacity with books, but also with supporters, writers and literary enthusiasts, eager to be part of a recent book signing event for Stephen Jay Schwartz.

The Strip is also the setting of his latest thriller, Boulevard, where the protagonist, LA homicide detective Hayden Glass, solves murders burdened by addiction.

Acknowledging the sacrifice he and his family endured working eight hours a day, then another six hours writing at night, Schwartz, with shaggy dark hair and charming sincerity, bestowed a round of thanks to those in attendance.

He acknowledged his wife Ryen, an editor in her own right, and warmly thanked his guests and publisher before reading a passage from his new work.

‘Boulevard’ is a compelling dark physiological crime thriller/mystery which, as Schwartz explains, deals with “a crisis of conscience, a crisis of the soul.” Hayden Glass must confront his painful past, and draw on his familiarity with LA’s underbelly for clues.

In a telephone interview while returning from readings in San Francisco, Schwartz opened up about his own painful past, his struggles with his addiction and its inspiration for ‘Boulevard’.

“It was very scary at first,” confesses Schwartz, who finally felt ready to talk about the personal impetus for the book with Connie Masterson in a televised interview. “It is the reason I wrote the book.”

“If I had read a book like this, I would have found help,” says Schwartz who designed the novel to entertain as much as to offer salvation to those suffering in his position.

“I would have recognized myself between the book covers,” acknowledges Schwartz, who hopes the same for others. “I had no idea I had an addiction; things had to fall apart a bit for me.”

Fortunately, with the support of his wife, Schwarz, a dedicated father of two school-aged sons, was able to get help to confront and defeat his addiction.

“We went through this process and therapy together. The book became very cathartic for both of us.”

In fact, he told the guests at Book Soup during the Q&A how surprised he was by the extent to which he experienced a catharsis from the process of writing. “I was able to explore the dark recesses of my mind.”

For inspiration, Schwartz intentionally avoided contemporary writers, as he “did not want to be influenced by modern voices.” Instead he read John Updike, Hemingway, Steinbeck and Kerouac, among others.

Prior to this novel, the first of a two-book contract with Forge Books, Schwartz worked in film under director Wolfgang Peterson doing script development. Having read so many scripts, the writer said that he needed to “detox from story overload to get fresh ideas.”

Schwartz may, however, find himself back in the film industry. CAA is presently handling the rights for a possible feature film deal and/or TV series.

Boulevard by Stephen Jay Schwartz (2009) is published by Forge Books and is available at amazon.com .