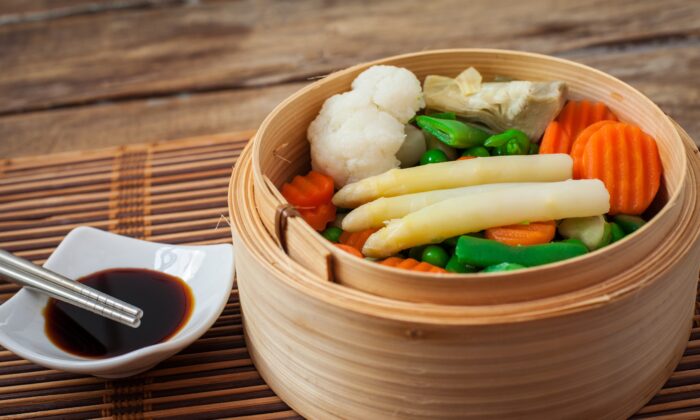 Eating with the season ensures your body is best fueled for what comes next. (Ramon grosso dolarea/Shutterstock)
Fitness & Nutrition

Steam Vegetables and Drink Kombucha to Cleanse and Energize

The first day of spring in Western culture is March 20, which bursts onto the scene at the tail end of the Chinese solar term Insects Awaken, which is characterized by lots of thunder.

In Chinese legend, thunder comes from the god Pangu, the creator of human beings. After he created the space between heaven and earth, his breath turned into wind, his voice into thunder, and his sweat into rain.

During the winter, legend says, the thunder hibernates inside the earth. When spring comes, farmers who begin digging their fields wake up the thunder from hibernation. In turn, the thunder helps to break the ground. The thunderclaps also wake up the insects—hence the term “Insects Awaken.”

The majority of Earth’s atmosphere (78 percent) is atmospheric nitrogen, making it the largest source of nitrogen. Thunder also causes the chemical reaction between nitrogen and oxygen to create NO2, which is a very important process in atmospheric chemistry.

At this time, insects and microbes are actively moving under the earth, which helps prepare the land for farming. All farming commences from this time of year.

Underground insects aren’t the only ones to awaken—all bugs are starting to move around. This includes airborne insects like bees and butterflies, as well as tiny lifeforms invisible to the naked eye. Bacteria start to repopulate after the humidity buildup from the previous solar term, Rain Water.

The traditional festival of Longtaitou (Lóngtáitóu), or “dragon raising its head,” falls on March 14 in 2021. The dragon is regarded in China as the deity in charge of rain, which is an important factor for agriculture.

On this day, beginning in 1046 B.C., the Chinese emperor would go out into the fields and lead his officials in farming. Another ancient practice to celebrate the festival was to fumigate insect pests by burning herbs and sprinkling the ashes around to deter them.

Living in Harmony With ‘Insects Awaken’

In traditional Chinese medicine, spring is the season to detox.

During this season, the Chinese recommend avoiding red meat, cutting out alcohol, and reducing sugar intake, as these all cause “heat” in the body, leading to inflammation.

According to the five elements theory from traditional Chinese medicine, red belongs to the element fire. Red meat and red chili should be avoided at this time because they may worsen the symptoms of skin allergies, which are very common spring ailments.

Alcohol speeds up inflammation inside our body, which may cause irritation and disease. Sugar is one step away from alcohol, so having less sugar is good during this term, especially for those who easily get the flu or cough in spring.

Those with weak respiratory systems or allergies to pollen, or who suffer from skin diseases, often feel uncomfortable around this time due to changes in temperature and humidity.

Steaming and boiling are the best cooking methods to mitigate the effects of this term, as foods cooked with these methods are less stimulating or irritating to the body.

In general, avoid deep-fried foods, as they add heat. Fire is one form of oxidation. Oxidation also occurs in the body, and Western researchers now know that eating red meat can contribute to oxidative stress.

Foods that don’t contribute to this include vegetables. Steam vegetables or eat salads with vinaigrette dressings to cleanse the blood and trim down extra fat from the winter.

Wild-grown vegetables are particularly beneficial to consume right now, as they are full of vitality, enzymes, and trace minerals.

Cultured foods are also important to eat. Fruit vinegar, such as apple cider, or kombucha, with a hint of honey and fresh peppermint leaves in lukewarm or room temperature water, make for a perfect detox or pick-me-up drink for this season.

Epoch Times contributor Moreen Liao is a descendant of four generations of traditional Chinese medicine doctors. She is also a certified aromatherapist, former dean of the New Directions Institute of Natural Therapies in Sydney, and the founder of Ausganica, a certified organic cosmetic brand.