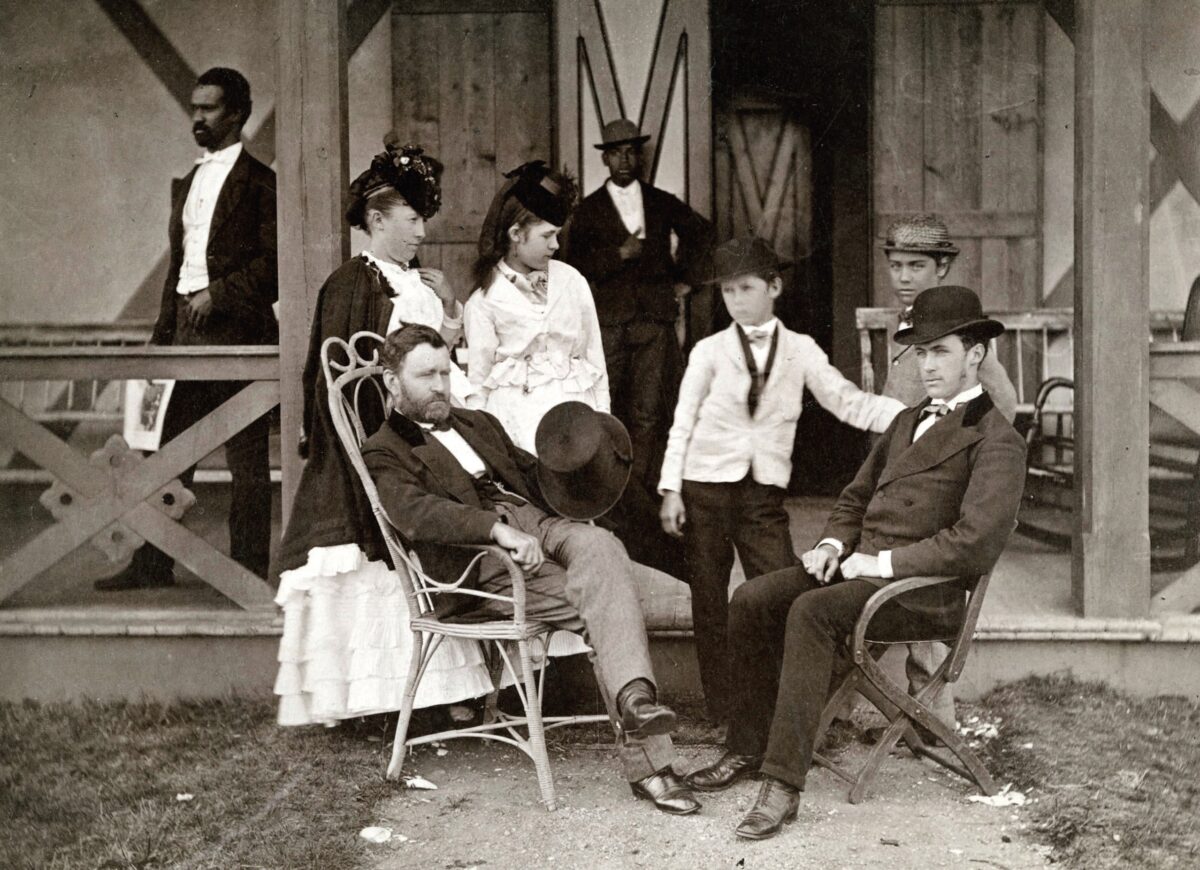 Ulysses Grant (seated left), Julia Dent Grant (standing, leftmost), and their four children, Jesse, Ulysses Jr., Nellie, and Frederick, in front of their cottage in Long Branch, N.J., 1870. The identities of the men in the background are unknown. (Public domain)
American Essence

Steadfast in the Face of Challenges, First Lady Julia Dent Grant Was an Anchor for Our 18th President

How the adoration and devotion of first lady Julia Dent Grant helped bolster the confidence of our nation’s 18th president
BY Deena C. Bouknight TIMESeptember 16, 2022 PRINT

Slavery, distance, family animosity, and a war conspired against Julia Dent’s courtship and then marriage to Ulysses S. Grant, but she soldiered on steadfastly.

Julia Dent Grant traveled to be with her husband, Ulysses, more than 10,000 miles during the four years of the Civil War—4,000 of those during the first year alone. Carriages, ferries, and trains carried her to his encampments, some of which were dangerously close to the front lines. Sometimes, their four children came with her; sometimes, she made the dangerous journeys alone. And almost always, she took meals with the officers, who were said to appreciate her sprightly nature and genial presence.

That Julia Dent would have even married Ulysses S. Grant went against mid-19th-century social mores and common sense. Julia was the daughter of a War of 1812 veteran and wealthy plantation owner who owned slaves and upheld pro-slavery political views; Grant was the son of an austere Ohioan Methodist tanner who supported the abolitionist movement. She grew up attending elaborate balls; he was raised forbidden to dance. She was polished and well-read, having attended a finishing school in St. Louis for seven years; he was an unassuming, natural equestrian with aspirations to be a math professor. She had a congenital lazy eye and a stout figure, and she thus requested photos taken of her in profile only; he was ruggedly handsome, maintained a fit frame, and looked squarely into a camera’s lens.

Yet Ulysses met Julia through his West Point roommate and friend, Fred Dent, Julia’s brother. Meeting the family at their White Haven plantation outside of St. Louis, Missouri, in 1844 opened a Pandora’s box. According to biographer Ron Chernow’s “Grant,” Ulysses “would be forced to straddle two incompatible worlds: the enterprising free labor economy of the North and the regressive world of southern slavery.”

After enduring an arduous four years of separation during their engagement, due to his obligations in the Mexican War, the couple married in 1848. During the next few years, they were together on military bases, bore another long parting when he was stationed at a remote spot on the Pacific coast, and became parents. And from 1854, when Grant resigned from the Army, until the Civil War began and he re-entered military life, Julia demonstrated what was described as an “incurable optimism” while Ulysses struggled to determine his livelihood through farming, rent collecting, business, and other occupations.

Chernow wrote, “Julia doted on Ulysses, who beamed as he soaked in her bottomless adoration. She fussed over his unkempt hair, whiskers, and clothing. ‘Your father is perfection,’ she instructed their children. ‘I just want to make sure others see this too.’ For Julia, he was simply a superman, capable of wondrous feats.”

Julia wrote in 1848 about the Mexican War years, “My soldier lover was in and about Mexico for four years, including the war. Every mail brought me a letter. Every one of them full of sweet nothings, love and war, and now and then some pressed leaves and flowers.”

Additionally, Chernow said, “From early on, she believed in him more than he believed in himself and was more ambitious for him as well. She bolstered his confidence, soothed his wounds, and pierced through his shyness until he learned to count on her constant strength.”

At the encampments, Ulysses would often take Julia into his confidence, spreading maps out before her and encouraging her to ask questions about the battle plans.

The stark contrast from slave-owning father’s daughter to general’s wife was painfully evident when she spent her days, after returning from the front, with her children at her family home, White Haven. Though she wrote about cherishing her time with family, she resented the pro-Confederate opinions of her father and area neighbors. She wrote about her summer of 1863 as “not a happy one” because “neighbors were all Southern in sentiment and could not believe that I was not; no matter how earnestly I denied it, … [and my father] argued and argued constantly upon the constitutionality of secession.”

At the White House

From all accounts, Julia was just as conscientious and attentive as a first lady as she was as a general’s wife. In the same spirit as Martha Washington, she presided over once-a-week receptions for the general public, with her only requirements being that ladies wore hats and men left weapons at home. She was also a gracious host to many visiting dignitaries. At the same time, she sought to bring recognition to the role of wives whose husbands served in the diplomatic corps, the Cabinet, Congress, and the Supreme Court.

In Ulysses’s last year as president, in 1877, the couple traveled around the world and were celebrated at every stop. Educational information at Ulysses S. Grant National Historic Site at White Haven lauds Julia’s devotion to her husband—and vice versa—and cites the union as “a great American love story” that lasted 37 years of marriage and longer as a devoted couple. In fact, a month after her husband’s death in 1885, William Sherman, Ulysses’s long-time friend and fellow compatriot during the Civil War, wrote to Julia, extolling her: “You were as true as the needle to the thread, in poverty as in health, in adversity as in exaltation.”

Julia survived Ulysses by 17 years and became friends with first ladies Frances Cleveland, Caroline Harrison, and Edith Roosevelt. She wrote in 1889 that she found comfort in writing about her life, especially the life she shared with Ulysses. “The children said I had found a fad at last. But it wasn’t a fad; it was a joy. It was living again the life that had been so sweet to me.”