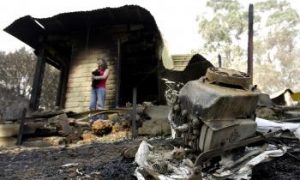 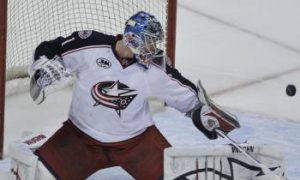 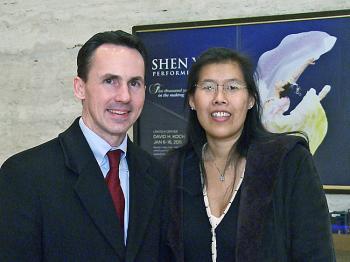 The couple had much to say about the afternoon performance, a sold-out show that received a standing ovation and two curtain calls. This was Mr. Messer’s first time seeing the New York-based Shen Yun perform and the second time for Mrs. Messer.

Mr. Messer was a candidate in the November elections for the New York State Assembly’s 16th District, covering much of Queens. He is currently a lawyer in the community. His response to the performance was enthusiastic.

Shen Yun has as its mission, through the arts, to revive 5,000 years of traditional Chinese culture, much of which was destroyed under decades of communist rule. Shen Yun dance routines contain classical Chinese dance, as well as Chinese ethnic and folk dance, together forming one of the most comprehensive dance systems in the world.

Mr. Messer complimented the dancers' skills: “If you look at any of the dancers, they’re all in tremendous shape. It was great, it was really great. I didn’t expect it to be so acrobatic.”

Many contemporary dance-related art forms have borrowed their techniques from classical Chinese dance, including the tumbling techniques seen in today's gymnastics or acrobatics.

Shen Yun’s dances tell stories of China's long history, all accompanied by a full orchestra featuring both Eastern and Western instruments. The show is made visually stunning with hundreds of handmade costumes, and performed in front of a high-tech animated backdrop that features scenery specially created for each dance or song.

Mr. Messer commented on the rich content of the program:

“I think it’s great that Shen Yun was able to take something traditional and historical, the culture, and present it in a way that lets us know what still goes on in the world [today], specifically in China,” he said.

Aside from stories from the past, Shen Yun also features dances that showcase today's Chinese people overcoming adversity in the face of persecution from the ruling communist regime.

“I thought they [Shen Yun] did it in a very tasteful way," he said. "You came away knowing that certain atrocities still exist, but they also did it in a way that [the presentation] was beautiful."

Mr. Messer went on to reflect on how lucky he feels Americans are to live in a country where they can freely express themselves without fear of reprisal.

"It's a dichotomy: they [Shen Yun artists] show the beauty of the tradition and of the history, and [also that] there is another side to history in China," he said.

"They're doing it in a way that [lets] people know that it [persecution] still exists," he said. "It came through very clear and balanced."

Mrs. Messer, who has attended a previous tour of Shen Yun Performing Arts, was quite impressed with this year’s show.

“It was beautiful, the colors, the story, the dancers … the costumes were very good also,” Mrs. Messer said. “The orchestra was amazing.”

Sharing his hope to see Shen Yun again, Mr. Messner concluded: “I really enjoyed it, we’ll definitely be back.”

Shen Yun Performing Arts New York Company wrapped up its two-week run at Lincoln Center Jan. 16, in a sold-out matinee performance. The company will now travel to Schenectady, NY, to perform at Proctors Theatre on Jan. 19, and then continue its tour to perform at The Kennedy Center Opera House in Washington D.C., Jan. 26-30.