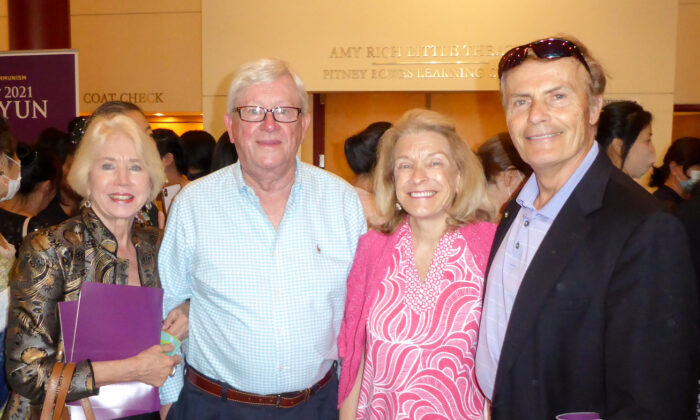 STAMFORD, Conn.—Richard Birrer, a physician, used to work in Pennsylvania, and outside his office was a big billboard advertising Shen Yun Performing Arts. It was so beautiful that Richard was attracted to see its performances. He bought tickets for the next time the New York-based classical Chinese dance company came around.

That was two and a half years ago. Then, the pandemic hit. “The longer the time went on, I felt like I might be hanging in the breeze, but the reputation of the enterprise precedes it. They stand by their name,” Richard said at the Palace Theatre in Stamford, Connecticut, on June 27. He recently heard that Shen Yun had returned, so on Sunday afternoon, he and his wife Christina, and their friends Candice and Renny Way, enjoyed a live performance for the first time in months.

Both of the couples are well-traveled and lovers of art and culture, and they were already familiar with the fact that traditional Chinese culture is a very spiritual one. Shen Yun is unique in that the Chinese culture it presents is China before communism took over. Since the company’s inception in 2006, the artists have made it their mission to revive the 5,000 years of this divinely inspired civilization.

Christina said she could feel the artists’ passion infused into the performance. Richard, who has a love for music especially, recognized melodies from one of the dances.

The Ways enjoyed the outing as much as their friends and found much that was familiar within Shen Yun. The high-caliber artistry and excellence in skill itself are universal, Candice explained, but the content was universal too. The performance of some 20 vignettes showed different periods and regions of China, with ethnic and folk dances from some of China’s 50-plus minorities—similar to how different regions of the United States have their own cultures, she said. There was also mention of a divine Creator, which people all over the world believe in.

“I like that the tenor spoke about God,” Christina added, referring to the bel canto soloist. “I think a lot of times you think of China, you think of something other than this. So this part, the spiritual aspect that I really loved, I think is very much in the Chinese people.”

Sometimes audience members are surprised to learn that China has such spiritual origins; once called the Land of the Divine, or the Celestial Kingdom, the culture was centered on the idea of harmony between heaven, earth, and humankind.

But the Ways were well aware that China today, under a communist regime, has difficulty expressing this spiritual side. Years ago, the couple had a Chinese tour guide who warned their group not to look at people practicing Falun Gong, a popular spiritual meditation exercise.

“They put them in a negative light, and we were wondering, were they really negative, or is this what we were being told?” Christina said. Renny recalled the guide saying, “Don’t accept the literature, don’t look at them. And wow, it makes you more curious.”

As the couple found out, Falun Gong teaches the principles of truth, compassion, and tolerance; it is a spiritual practice of mind, body, and soul. When they saw Falun Gong referenced in a storytelling dance during Shen Yun’s performance, they already knew about the Chinese regime’s suppression. They commented that the story was well done.

The glimpse of modern China in Shen Yun’s performance also stuck in the mind of Richard McManus—but it was news to him.

“The persecution of the people for practicing their religion—I was surprised. I didn’t know that this is still happening today under this regime. It’s terrible,” McManus said. “I felt badly for them, that they have to live under that persecution, with that persecution in their lives. They’re not free as we are.”

McManus attended the performance with Judy Librizzi, both retired teachers. It was quite a trek to make from the Hamptons: they had to drive, take a ferry, and make another drive. “But it was worth it, it’s worth it. Just the idea—Judy and I, we go to several shows, and because it was all shut down, we really missed that. And this! To be able to sit in an audience and see this,” he said.

“It’s like being released,” Librizzi said of venturing out to see the long-awaited performance.

“It’s like having a weight above your head removed,” McManus said. There was much to be thrilled by in the performance, as McManus explained; China is revealed to be fantastically diverse, both in geography and culture. And the costumes were practically another character of the dances, he added, with the sleeves sometimes being used as gravity-defying props, or the skirts turning into kaleidoscopes, and so on.

“It’s all there. Its story told through dance, so you learn a lot about the culture from which the dance originates,” McManus said.

The divinely inspired culture from which classical Chinese dance was tempered over the millennia is what touched Rita Caviello the most.

“It was out of this world,” Caviello said. It moved her to see that the ancient Chinese viewed human life as once divine, coming from heaven. The theme was present throughout history, including in tales of divine beings coming to the aid of the good and faithful.

“It makes you feel something inside of yourself that you forgot, and you see this show and it’s like you remember this thing you forgot in the past that got submerged,” she said. “I thought it was just magical.”