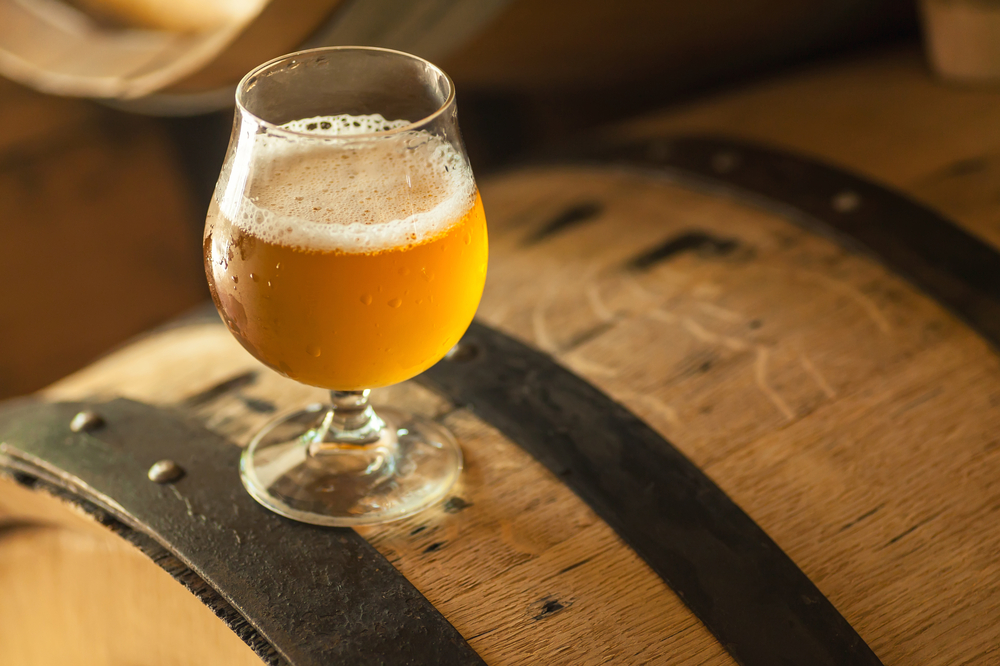 Sour beer styles are in. Here's a primer on what you need to know. (Shutterstock)
Food

Sour Beers: Bottoms Up, Pucker Up

If my grandfather had pulled a beer from his fridge and found it sour, he would have dumped it down the sink or called for a refund.

But today, craft brewers are purposely producing a wide range of beers that may seem more akin to lemonade, yogurt, or wine than to your granddaddy’s lagers.

Unlike “pilsner,” the term “sour” is not a particular style, but rather a descriptor of a wide range of brews with tart or acidic flavors. Back before Louis Pasteur gave us an understanding of fermentation and his pathogen-killing process of pasteurization, most beers were likely to ferment and sour to some degree, as yeasts—the ingredient beer-brewing monks explained merely as “God is good”—were wild and random.

Sour beer styles are the results of brewers figuring out how to encourage that souring in a tasteful way.

The various styles of sours employ bacteria such as Lactobacillus or Pediococcus, or a special yeast, “Brett” (Brettanomyces), which occurs in nature on fruit skins. Brewing such a beer can be challenging in that by introducing these wilder elements into the brewhouse, a brewer increases the risk of contaminating other beers that aren’t intended to be soured. But for sour fans, it’s worth it.

During a tour of Cantillon, a Brussels brewery specializing in sour beers since 1900, the guide instructed us to look up at the wood ceiling. What we saw was more horrifying than a college dorm room fridge at the end of the second semester: discolored wood beams bore patches of what looked like white mold. But this is what makes their beer special. As the city built up around them with concrete and steel, the brewery became an isolated biosphere of the microorganisms that help produce beers unique to that location, similar to the way a wine’s terroir sets it apart from all others.

On a visit to New Glarus Brewery in Wisconsin—the first U.S. brewery to release a commercial sour beer back in 1994—I met owner Deb Carey, who showed me their koelschip (coolship), an open stainless steel container where the wort (the sweet liquid that ferments to become beer) comes to cool after its time in the brew kettle. Condensation dripping from the cedar roof beams above and the breeze through the open windows provide the wild yeast for the fermentation process. This beer moves to the next room over, where it ages in wood barrels that may be further inoculated with Brett.

A Method to the Madness

Calling these yeasts wild is accurate in the sense that they are naturally occurring, but also in that they can be rather unpredictable. Even intentionally soured beer can go an unpleasant direction. To help prevent that, brewers can create a nutrient environment in the grain mash that encourages favorable microbes, or inoculate barrels with previous beers that turned out well.

Another method of control is blending. Natural variations among barrels are mixed to arrive at a preferred flavor profile, something a blender tries to do consistently through the years.

There are two basic categories of sours: kettle sours, which are made by adding Lactobacillus to the brew before it is boiled; and traditional aged sours, which add the bacteria and Brettanomyces yeast after the boil. The latter can require years to complete, making them expensive in the sense of taking up precious brewery space, while kettle sours take just a few weeks. These brews lack some of the complexity of barrel-aged sours, but have their own charms.

Sourness may vary, from the sweet side of tart to sour like lemons or balsamic vinegar, and everything in between. Here’s a short primer for what to look for on your next trip to the taproom or liquor store. As any style of beer can be soured, you may run across sour pale ales or sour stouts, but the following are particular styles unto themselves.

As its name suggests, this brew originated in Berlin. The cloudy, low-alcohol (around 3 percent by volume) ale includes wheat as an ingredient alongside the usual malted barley, and traditionally, it’s not a kettle sour. Creative craft brewers in North America, however, have taken to kettle souring it and adding fruit to them as well, anything from strawberries and key limes to kumquats and prickly pears. In Germany, it is served with an optional bit of raspberry or woodruff syrup to cut the acidity.

Another German sour style, Gose (GOES-uh) hails from Goslar, near Leipzig. Rather than malted barley dominating, malted wheat is more than half the grain involved in the recipe. The original beer, dating back at least 500 years, had a hint of saltiness, which many believed came from area mineral mining at that time. So when brewers in Leipzig copied the style in the early 1700s, they added salt in the brewing process. By the mid-20th century, only a few small German pub brewers made it, but craft brewers have brought it back far beyond its original popularity, and they continue to add the salt—along with a plethora of creative flavorings to give it a modern twist.

Lambics are uncarbonated, barrel-aged sours containing 30–40 percent wheat and brewed from wild yeasts, which can impart a funky character to them. Expect something wine-like and dry, but with the oakiness of the barrel as well. Gueuze is a carbonated blend of a 1-year-old lambic with a 2- or 3-year-old lambic. Cantillon, in Brussels, is well known for both styles.

Both come from the Flanders region of Belgium. Roasted malts provide the ruby red color of Flanders Red, and the souring is done in the barrel-aging process. A highly regarded version is Duchesse de Bourgogne from Belgium’s Brouwerij Verhaeghe, a blend of 8- and 18-month beers. Oud Bruin, an aged brown ale, is similar, but aged in steel. Monk’s Café Flemish Sour Ale by Brouwerij Van Steenberge is an approachable example and fairly easy to find.

Sour beers—both kettle sours and aged sours—may also have fruit additions. Cherry is a popular choice for its complementary sweetness-tartness, as is the case for Lindemans Kriek (a lambic with cherries). Peach, apple, and raspberry are also popular. Of all the sours, these are often the sweetest, and perhaps a good place to start your sour beer adventure.

Kevin Revolinski
Kevin Revolinski is an avid traveler, craft beer enthusiast, and home-cooking fan. He is the author of 15 books, including “The Yogurt Man Cometh: Tales of an American Teacher in Turkey” and his new collection of short stories, “Stealing Away.” He’s based in Madison, Wis., and his website is TheMadTraveler.com
SHARE
Friends Read FreeCopyFacebookTweet
SHARE
Friends Read FreeCopyFacebookTweet
You May Also Like