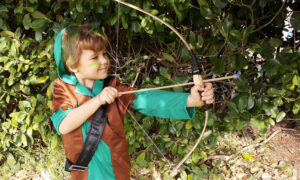 The cast of the 2002–03 Broadway revival of Thornton Wilder's "Our Town." The play debuted in 1938. (Joan Marcus/Getty Images)
Literature

Some Lessons From Thornton Wilder’s ‘Our Town’

A play for our time
By Jeff Minick
biggersmaller
Print

Around the age of 55, I discovered I could no longer trust myself to read certain poems to my students without the risk of tears.

I don’t recollect what poem I was reading aloud to the class on that day of revelation. What I knew at the time was that my voice was cracking and my eyes were filling up with saltwater. Deciding that the last thing these young people needed to see was an old guy with tears streaming down his time-roughened cheeks, I halted the reading, declared a five-minute break, washed my face in the restroom, and returned to a class of students still amazed—or perhaps disconcerted—that a poem could so affect their teacher.

Which brings me to Thornton Wilder’s play “Our Town.”

Several of my classes over the years read this play aloud, and merely listening to parts of it, especially the ending, threatened to bring on the waterworks. Even this morning, sitting alone at my desk and reading the last few pages of “Our Town” to prepare to write this piece, the resultant mist meant grabbing a handful of tissues and dabbing away at my eyes before my daughter came downstairs, saw me, and wondered if Dad was cracking up.

I suspect that part of my reaction this morning derives from my age. My 69-year-old self is both stronger and weaker than the man of 30 who disappeared so long ago in the mists of time. The deaths of my spouse, my parents, and other relatives and friends; the precious regard I have for my children and grandchildren; the blows delivered over the decades; the blows I have delivered to my self: These have toughened my spirit while at the same time making me more aware of the pain and suffering of being human and simply drawing breath on this planet, and so more vulnerable to ocular leakage.

I wonder, too, if the virus and the pandemic helped draw those tears. “Our Town” takes place in Grover’s Corners, a small village in New Hampshire, and those who live there intimately know their neighbors. In our time of social distancing, lockdowns, and orders to stay at home, the contrast between the play and our lives at the present moment is glaring.

Mostly, though, “Our Town” so powerfully affects its audiences and me because it reminds us of what it means to be human: the joy and the sadness, the courage and the fear, the strength and the fragility found in each of us.

A Celebration of the Ordinary

Like the old television series “The Andy Griffith Show,” Wilder creates an idyllic vision of small-town life. The folksy Stage Manager acts as a guide throughout the play, introducing us first to the buildings and businesses in the town, and then to various villagers and families. He has the ability to weave back and forth through time so that, for example, when we meet Doc Gibbs in May of 1901, we learn a few lines later that he dies in 1930.

At one point, when the town’s newspaper editor, Mr. Webb, is being interviewed about the town, the Stage Manager asks if anyone in the audience has questions for him. A Woman in the Balcony asks if there’s much drinking in Grover’s Corners, to which Mr. Webb responds:

“Well, ma’am, I wouldn’t know what you’d call much. Satiddy nights the farmhands meet down in Ellery Greenough’s stable and holler some. We’ve got one or two town drunks, but they’re always having remorses every time an evangelist comes to town. No, ma’am, I’d say likker ain’t a regular thing in the home here, except in the medicine chest. Right good for snake bite, y’know—always was.”

In those few lines, we find the essence of this small town.

In this same scene, when a Belligerent Man asks why the town doesn’t address “social injustice and industrial inequality,” Webb responds:

“Well, I dunno … I guess we’re all hunting like everybody else for a way the diligent and sensible can rise to the top and the lazy and quarrelsome can sink to the bottom. But it ain’t easy to find. Meanwhile, we do all we can to help those that can’t help themselves and those that can we leave alone.”

We learn more about the town when the Stage Manager describes what’s going into a time capsule in the cornerstone of a bank under construction: a copy of The New York Times and of Mr. Webb’s Sentinel, a Bible, the Constitution of the United States, a copy of Shakespeare’s plays and of “this play,” so that “people a thousand years from now’ll know a few simple facts about us. … This is the way we were: in our growing up and in our marrying and in our living and in our dying.”

How times have changed.

By the play’s end, Emily Webb has married the boy next door, George Gibbs, and then dies in childbirth. In the cemetery, she speaks with those who have preceded her in death and learns that she can return to the land of the living for a visit if she so wishes. Against the advice of these deceased souls, she chooses her 12th birthday for her visitation and soon finds herself in her family’s kitchen.

Her mother is busy making breakfast and idly chatting to her about birthday plans and gifts. Realizing how little the living pay attention to the miraculous world around them, Emily cries out, “I can’t. I can’t go on. It goes so fast. We don’t have time to look at one another,” and then breaks down sobbing.

A few lines later, she asks the Stage Manager, “Do any human beings ever realize life while they live it?—every, every minute?”

He answers “No,” pauses, and then says, “The saints and poets, maybe—they do some.”

By the time she returns to the cemetery, where she talks with the others, Emily has realized how we humans so often overlook the important things in life, how much we miss by being so overwhelmed by worldly duties and events, and how our earth is “straining away all the time to make something of itself. The strain’s so bad that every sixteen hours everybody lies down and gets a rest.”

A Play for Our Time

“Our Town” first opened on the stage in 1938. Since then, we’ve lived through wars hot and cold, we’ve seen times of turbulence and relative peace, we’ve undergone economic ups and downs, and we’ve witnessed enormous and sometimes ugly changes in our society and the arts. In the past year alone, we’ve seen ongoing attacks on our culture, suffered a pandemic, experienced a summer of rioting and arson in some of our cities, and are now in the middle of a constitutional crisis stemming from the recent national election.

Because of so many transformations, some readers and theatergoers—the play remains popular even today, at least when theaters are open—may regard “Our Town” as a quaint piece of Americana depicting a country and its values now lost to the mists of time.

“Our Town” should inspire us to resurrect and reclaim tradition, common sense, and neighborliness, to become more aware of the rhythms of time and nature, and to remember, too, those who came before us. When the Stage Manager acts as the preacher at George and Emily’s wedding, he encapsulates these ideas in his brief sermon, ending with these thoughts: “And don’t forget all the other witnesses at this wedding,—the ancestors. Millions of them. Most of them set out to live two-by-two, also. Millions of them.”

We can also take to heart the lesson learned by Emily after her death. We may not be saints or poets, but we can pause from time to time during our hectic lives, open our eyes, and apprehend the mysterious beauty that is the beating heart of this world.

At the very end of “Our Town,” the Stage Manager looks at his watch, and then says, “Hm—Eleven o’clock in Grover’s Corners.—You get a good rest, too. Good night.”

Let’s heed that advice and get some rest. We’re going to need all the strength we can muster in the days ahead.