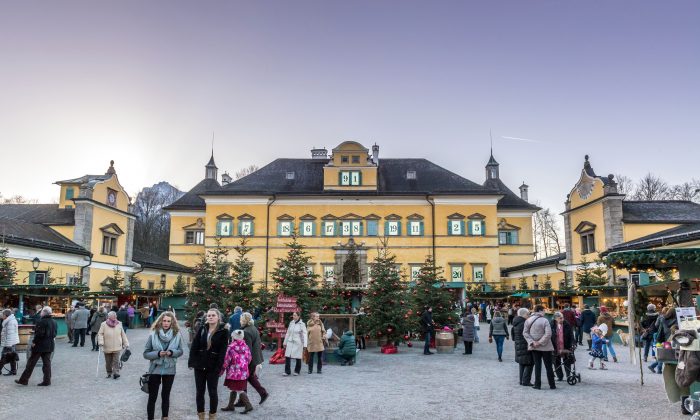 It was just a simple poem written by a village priest, but when the church organist composed a melody for it, “Silent Night” became a song that touched the world. The priest, Josef Mohr, had wanted to give a song of hope to his small congregation in the village of Oberndorf bei Salzburg in Austria. His words, first performed in Oberndorf on Dec. 24, 1818, soon took on a life of their own.

Travelling singers heard the carol and performed it at trade fairs. Then they took it to the court of the King of Prussia, which requested a copy of the song. Despite its humble beginnings, “Silent Night” went on to become the best-known Christmas carol in the world.

Today, Christmas in Oberndorf and the surrounding region of Salzburg remains a time of wonder. In a world where the holidays are threatened by commercialism, this region of Austria still celebrates Christmas in many traditional ways.

Today, Christmas in Oberndorf and the surrounding region of Salzburg remains a time of wonder.

On Christmas Eve, the lights in many of the local churches are dimmed, leaving only candlelight. Then the congregation sings “Silent Night” in its original German version: “Stille nacht, heilige nacht…” I found the sound of this memorable tune in such an inspirational setting very moving.

Today, you can visit the Silent Night Chapel and Museum, which stands in place of the former St. Nicholas Church where the song was first performed. During the holidays, a small Christmas market is located in front of the chapel. The Silent Night Chapel has meaning to many around the globe, and has become a pilgrimage site.

The city of Salzburg is just a 30-minute drive from Oberndorf, and it’s a good base to explore the region. Best-known as the setting for the film “The Sound of Music,” Salzburg is charming at Christmas, with its narrow cobblestone streets lit up in sparkling lights and Christmas concerts performed throughout the city.

The traditional Christkindl market in Cathedral Square is a delight for the senses, filled with the smells of gingerbread and hot mulled wine. Local choirs and children’s school groups often perform carols, drawing visitors to the square with their voices.

The Christmas market at Hellbrunn Palace is another favourite. From Nov. 17 to Dec. 24, Hellbrunn transforms into a Christmas fairy tale, with hundreds of trees decorated with 13,000 lights. The castle façade is transformed into an oversized advent calendar, and there are pony and train rides along with Christmas market stalls.

The small Austrian villages of St. Gilgen, Strobl, and St. Wolfgang celebrate Christmas in a distinctive way. All three are connected by Lake Wolfgangsee. At Christmastime, a ferry service takes visitors to Christmas markets at all three villages. From the water, you can see the villages lit in their holiday finest, with views of St. Gilgen’s 11-metre-high advent candle, Strobl’s six-metre-high Christmas star, and St. Wolfgang’s lantern of peace.

Sometimes, you’ll even hear the echo of Christmas choirs or brass horns across the water.

At Christmas, the streets of St. Gilgen are decorated with hundreds of Advent candles. The Christmas market is painted in Baroque style, with painted figures of animals, angels, and people. An illuminated path guides visitors along the story of Christ’s birth. The season in St. Gilgen includes concerts and Christmas plays. Many families come to enjoy the Mozart ice rink or to take the cable car up Zwölferhorn Mountain for an incredible view of the lake.

The idyllic town of Strobl turns into a nativity village at Christmas. The life-size nativity scene is a focal point, and a shepherd’s path guides visitors to a giant Advent gate and then along more than 30 wooden stalls. Little ones like visiting the sheep at the market.

The St. Wolfgang Christmas market is open from Monday to Friday, but Wednesdays are the most fun. Electric lights are turned off and Christmas festivities are lit by candlelight, creating a magical atmosphere. The shops and wooden stalls are lit by lantern, and you can watch local craftsmen creating their vintage works. On Mondays, St. Wolfgang offers guided walks along an ancient path over Falkenstein Rock, which is lit by torches and lanterns.

Christmas in Austria is refreshingly sweet, with an emphasis on the simple pleasures of being with friends and family. When you add Christmas markets filled with twinkling lights, baked sweets, and the sound of Christmas carols, you have a holiday experience that is unforgettable.

Janna Graber has covered travel in more than 40 countries. She is the editor of three travel anthologies, including “A Pink Suitcase: 22 Tales of Women’s Travel,” and is the managing editor of Go World Travel Magazine (www.goworldtravel.com).