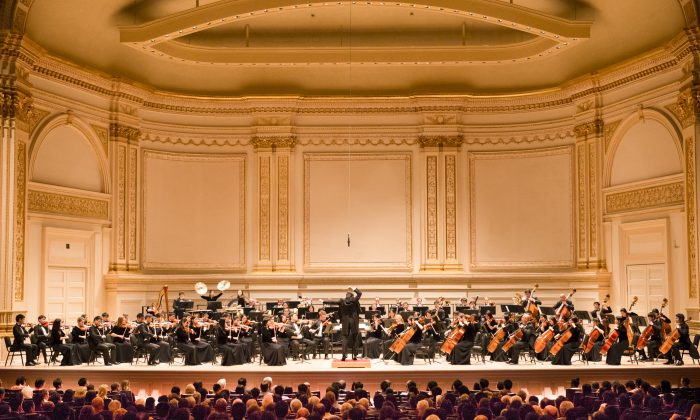 Many in history have tried but failed. The task of harmonizing music from the East with the West is a daunting one, yet one orchestra has succeeded.

Because the frequencies of notes played on Chinese instruments differ from those of the West, it is nearly impossible to blend in the two distinct sounds on a large scale. But Shen Yun Performing Arts has been doing precisely that since 2006.

“Compliments to the composers that are able to integrate the two kinds of instruments. Delightful,” said Per Brevig, conductor and professor at The Juilliard School after hearing Shen Yun perform in New York last year.

Shen Yun, with its classical Chinese dance and music production, has graced some of the world’s most renowned stages. Its performances—from Lincoln Center in New York and the War Memorial Opera House in San Francisco, to premier venues in France and Japan—are sold out.

From its start, the orchestra has performed as an integral part to Shen Yun’s classical Chinese dance performances. Many audience members, however, have said that for them, hearing it in the role of accompaniment is not nearly enough.

Their wishes were granted in 2012 when the orchestra flew solo for the first time. Roughly 100 musicians selected from the company’s three touring orchestras united for a grand international debut at Carnegie Hall, in a performance that concluded with three encores.

There is no orchestra like Shen Yun. It is the world’s only orchestra that combines both classical Western and Chinese instruments as its permanent members. Alongside classical symphonic mainstays—like brass, woodwinds, strings, and percussion—Shen Yun incorporates ancient Chinese instruments like the two-stringed erhu and the plucked pipa.

Both of these instruments are deeply rooted in traditional Chinese culture. The erhu is said to have a history of over 4,000 years, while the pipa is often depicted as a heavenly instrument played by celestial maidens in Buddhist cave frescos.

In Shen Yun’s all-original compositions, Chinese instruments bring out the distinct flavor and coloring by playing the melodies. Meanwhile, the Western instruments summon the precision and grandeur of the classical symphony orchestra.

This orchestral genius is the centerpiece of the program. At Carnegie Hall, the Shen Yun Symphony Orchestra will feature the best original works from Shen Yun’s production. The program also includes classical masterpieces, this year by Berlioz and Dvorak.

The program also features Shen Yun’s tenors and sopranos, acclaimed for singing Chinese lyrics while using bel canto technique. Maintaining Chinese pronunciation with these techniques is highly difficult, but it creates an astounding feast for the ears.

As with Shen Yun’s dance, the Symphony Orchestra is not only an experience for the senses—it is also a delight for the heart. Shen Yun Symphony Orchestra’s repertoire is drawn from 5,000 years of civilization, reviving themes of virtue and courage, finding inspiration in an array of legends, regions, and peoples.

Reviving themes and melodies from ancient times, but presenting them like they have never been heard before, is something at which Shen Yun excels.