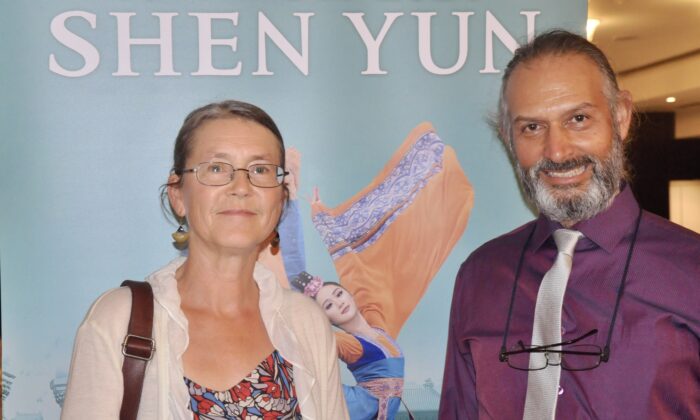 AUCKLAND, New Zealand—Yolanda van den Bemd’s first impressions as she sat enjoying the first half of Shen Yun Performing Arts’ matinee performance, was of the color and beauty of the movements of the dancers together with a live orchestra playing.

“I could just see a bit of [the orchestra] I was in the front row,” she said.

Being seated near the orchestra was a real treat for van den Bemd who is a music teacher. Accompanying her to the performance at the Kiri te Kanawa Theatre, Aotea Centre, on March 1, 2020, was Leonard Matthews, a sales engineer.

Both were pleased to hear the East-West orchestra and appreciated Shen Yun’s unique orchestral compositions. It was the soloist playing a two-stringed instrument called the erhu and its “amazing emotional range that it can portray,” that touched van den Bemd.

Summing up the dancers’ costumes,  she thought they were stunning.

“Everything was just so perfect, not a thread out of place—I love the way the colors were graded from the pink to … cream … and, of course, the long sleeves and the brightness of the orange and the pinks was pretty amazing,”  van den Bemd said.

Losing traditional culture and traditions is “not okay” and van den Bemd wants this message to be given out to the world. Shen Yun’s mission is to bring back traditional Chinese culture.

This was revealed in a dance set in present-day China, during which van den Bemd felt quite affected by the facial expressions of the dancers as they interpreted the events of the story. These tell the story through music and dance about the courage of the spiritual group called Falun Dafa.

“I was sort of on the edge of my seat a couple of times,” van den Bemd said.

“All the dances were spectacular but I really enjoyed the comedy. It was great to see some comedy—it was lovely to have that balance of fun, a bit of silliness and a bit of joking around,” she said.

Shen Yun’s dancers undergo years of rigorous training in order to perform the complicated leap, bounds, and tumbling movements in what is one of the world’s most comprehension dance systems.

Her companion, Matthews, was particularly impressed by “Sleeves of an Ancient Style,” where, according to the Shen Yun program, ladies of the Tang dynasty dance in elegant dresses with billowing sleeves. He also praised all of the costumes of the dancers and all of the music.

“I think I was surprised by the whole beauty of the show. How it was put together, the music—having a live orchestra is always the best thing. I always enjoy live orchestra—the unusual instruments that we don’t often hear.”

Matthews felt his emotions seesawing as he watched the dances.

“It was wonderful to see their joy.” One moment and then, “The dramatic scenes were quite touching and the way [dancers] displayed the brutality that is going on, and then to have the comperes say that it is actually still happening is quite a strong indictment of what’s happening in China now,” Matthews said.

He also found the backdrop magical, he “loved the way the screen [digital projection] was used to have the actors arrive and disappear—it was very clever,” he said.

With reporting by Diane Rowe.