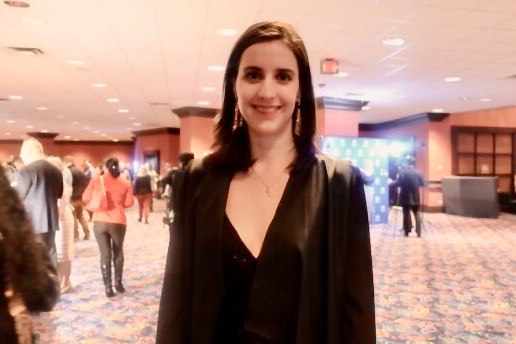 ROSEMONT, Ill.—Pianist Monica Miodragovic saw Shen Yun Performing Arts on Feb. 14, 2020, and was blown away by the creativity.

“It’s just incredible seeing so many talented dancers,” she said at the Rosemont Theater. “I really admired the poise, and grace, and elegance with which they execute all the movements of the different scenes and I really like the creativity and the story-line behind it.”

Monica Miodragovic is an accomplished pianist. She holds degrees in piano performance and music theory. Currently, she is a Teaching Artist at Old Town School of Folk Music at Columbia College Chicago. She has performed in the Weill Recital Hall and the Stern Auditorium of the Carnegie Hall. She has also performed with the CCPA symphony orchestra, the CYSO symphony orchestra, and the FIU symphony orchestra.

“I’m enjoying it so much,” she said. Though the culture of ancient China was far removed from Miodragovic’s everyday life, she felt most of the stories were held themes that were easy to relate to, while others gave a glimpse into the uniqueness of the culture.

New York-based Shen Yun is a music and dance company that through story-based dance, endeavors to revitalize traditional Chinese culture. A Shen Yun program features 20 or so vignettes that retell stories from China’s myths, legends, and its rich history from 5,000 in the past to the present day.

Miodragovic pointed out one of the specific vignettes that features contemporary China and current persecution of Falun Dafa practitioners. “I really appreciate it, learning more about the current events to something that cannot be spoken about there, but can raise awareness and maybe make a difference and help with the oppressive system there, maybe from the outside,” she said.

Falun Dafa is an ancient meditation practice that follows the guiding principles of Truthfulness, Compassion, and Tolerance. It has been brutally persecuted by the communist regime in China for over two decades.

The most emotional vignette for Miodragovic was the one that told the story of the persecution. “That one really spoke to me and I like, made me very tender inside, you know, it was very different from the other ones,” the pianist said.

The artists practice Falun Dafa themselves. According to the website: “Today, Shen Yun’s artists—dancers, musicians, choreographers, composers, and the entire team—follow this noble tradition. For them, this spiritual connection is the motivation for striving to excel, is the heart behind each movement of the dancer and each note of the musician. It is why audiences can feel there is something different about Shen Yun. Their source of inspiration, rooted in traditional Chinese culture, is the spiritual discipline known as Falun Dafa.”

“I think it’s beautiful. I think there are a lot of aspects of that culture that we can learn from,” the pianist explained. “The meditation, the moral values, the integrity, and sincerity.”

“And I think there’s so much in the Eastern culture that we can learn from. And I was really impressed by the Falun Dafa scene of the oppression of the people who practice it. And I think it’s really great that they’re bringing the awareness here in Western society to that. And I hope that their passion will end soon,” she said.

“It’s very interesting. It’s very spiritual. Everything they do, there’s personal improvement that they always work on and the moral values, I find that very interesting and different from here in some ways,” she added.

“I think they’re doing great,” she said of the performers. “I think that the meditation really helps with the focus and the clarity to project their ideas to us and to bring it in their most pure form.”

She noticed that Shen Yun’s orchestra features a blend of Eastern and Western instruments. “I think it works quite well. I was actually, that’s one of the first things I noticed because I’m a musician. I was really surprised [by] how well it went together. The two instruments from the two cultures,” she said.

“I think it was very harmonious, the way things were put together,” Miodragovic elaborated, explaining how the sounds were distinct but orchestrated in a way so that the timbre of the sounds were complementary.

In addition to the dances, Shen Yun also features solo vocalists and instrumentalists. This year’s performance featured a solo soprano with piano accompaniment.

“The singer. That was amazing. Very powerful voice. It was—it really carried through the whole hall. And the pianist, just gracefully accompanying her. It was really beautiful. She sang with a lot of power and pain. I could see it. And a lot of determination and hope for the better future. What we all hope for. Always,” Miodragovic said.

With reporting by Valerie Avore, NTD Television, and Andrew Darin.