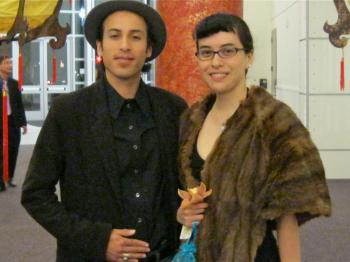 Mr. Olivares said, “It was great, fantastic! I really liked some of the art direction.” He especially liked the hi-tech animated backdrop, saying, “The background made it contemporary, a combination of ancient and modern.”

He added that “it was pleasurable, but also thought provoking.”

Ms. Ormsby-Olivares was enjoying the hundreds of handmade costumes, and also the singing: “I loved the costumes. … I was half expecting this to be an opera, so I also really enjoyed the soprano, she had a beautiful voice.”

She was also impressed with the digital backdrop with animation that creates a sense of dancers leaving the stage and moving into the background or other dimensions. “I loved the incorporation of the digital background with the dancers and how they used the whole stage as an entrance and exit. Sometimes the actors would go over the stair, into the digital (backdrop) and then they’d fly away. … I was like, “Wow!” It caught me by surprise. I enjoyed that.”

The Olivares are sensitive to culture and its expression. Ms. Ormsby-Olivares said, “I felt like there were a lot of different sub cultures. I liked how you could tell by the costumes that there were different regions and different people, and different ways of expressing themselves and their culture. Different outfits that they wore, instruments they play, and the choreography, and head pieces.”

As for Mr. Olivares, he said, “I liked the instrumentation and the physicality. I just love seeing people flip around, and I imagine myself doing that. I also liked seeing all the instruments. We recently went to an instrument store in Monterey Park. I want to play a pipe organ called the sheng and she wants to play the erhu.”

They were keen to tell all their friends about Shen Yun. “You've gotta see it! … We have a lot of Chinese friends. I’m going to tell them that they have to come. It was worth it,” Mr. Olivares said.