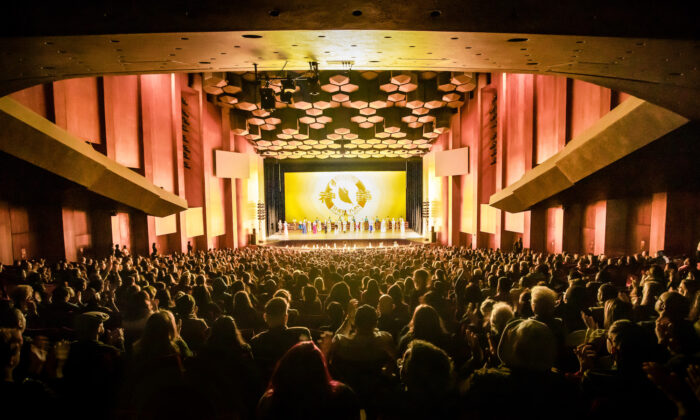 Many among the first to see the all-new production explained how long they’d waited to see such a performance, describing it as a reminder and message of hope—a blessing, magical, and a timely depiction of an ongoing “spiritual battle.”

Shen Yun, based in New York, is the world’s top classical Chinese dance company. It was formed in 2006 by artists pursuing freedom of faith, and in a few short years, it grew to global prominence as it restored this nearly lost art form.

Its mission, according to its website, is more than a performance, “it’s a revival of the beauty and goodness of China before communism.”

They finally had the chance on Dec. 26, and Mr. Iandoli felt it came at just the right time.

“Especially at this time in the world, we need this inspiration, we need this guidance,” he said. “When you see this, you realize maybe there is still hope.”

‘A Great Blessing to Be Here’

Social media personality Cameron Hamilton, who works in artificial intelligence and has 2 million followers on Instagram, found inspiration in the production’s artistry, which he said he’d be incorporating into his videos. But more than that, he felt “at peace.”

“It was just a great blessing to be here, to be able to experience it. … You can just see when everyone came together—it was just a beautiful thing to see all this talent in one space,” Mr. Hamilton said at the Atlanta Symphony Hall on Dec. 26. “Everything from the dancing, to the musical orchestra, the solo acts—I mean I was blown away.”

“I think it’s beautiful,” he said. “The dancers are clearly very trained at a very high standard. There’s a great sense of discipline as well, which I think is marvelous.”

A Shen Yun performance includes some 20 vignettes, incorporating a unique, patented backdrop, and an orchestra blending East and West with dance.

Leo Lee, a professor of English, attended the same performance and said that as the curtain went up to reveal the opening scene of Shen Yun, he was moved to tears.

“I don’t know [why], but if you believe in spirituality, it’s something that connected with me. As the curtain opened up, I just cried,” he said after seeing Shen Yun on Dec. 26.

Mr. Lee, who saw Shen Yun for the first time, added that the performance was “amazing.”

‘It Reaches Your Heart’

William Graves, a financial adviser who enjoyed the performance with his 85-year-old father, said the performance showed a spirituality that gave him a deeper connection to the traditional Chinese culture.

“It created more of a sense of respect for the culture. The fact that we have a common core of religion and identity in all of it, it created some unity in that respect,” he said. “Very inspirational. It’s great to see what people can do when they come together.”

“The dancers came together. They performed a show for a bunch of people in the audience who came together and on top of that, it unified us as an audience behind the message of divinity. The show performance, the work that had to go into it, the appreciation for it all,” he said.

“It reaches your heart. I lost my mother recently, and the spirituality that comes through is powerful, it’s very strong,” Mr. Graves said. “It reminds you that there’s a higher power—there’s a higher being—and the dancers did a fantastic job of interpreting a lot of that in their motions, movements, grace and beauty—it all came together.”

Lisle Cormier, who saw Shen Yun’s first show of the season on Christmas Eve in Atlanta, said what moved him the most were the universal values presented through music and dance.

“[The song] talked about heaven, the Creator, and that one day we will all be back in heaven, that we’ll be persecuted before that, and we have a battle to fight here on earth until we go back into heaven,” he said. “There were figures in the production that may have resembled divine beings.

“I think it’s saying that there’s a spiritual battle that we have to be aware of; most people are not aware of it. We can ignore it, but we’re still going to be part of it; and also, great things can come through suffering. We can’t avoid it necessarily, but through our suffering, we can be honed and purified and made more ready for what’s to come.”

He, like other respondents, said they’d urge their loved ones to attend a performance themselves.

“This is just the beginning—there are lots of opportunities to go see it where you are,” he said.