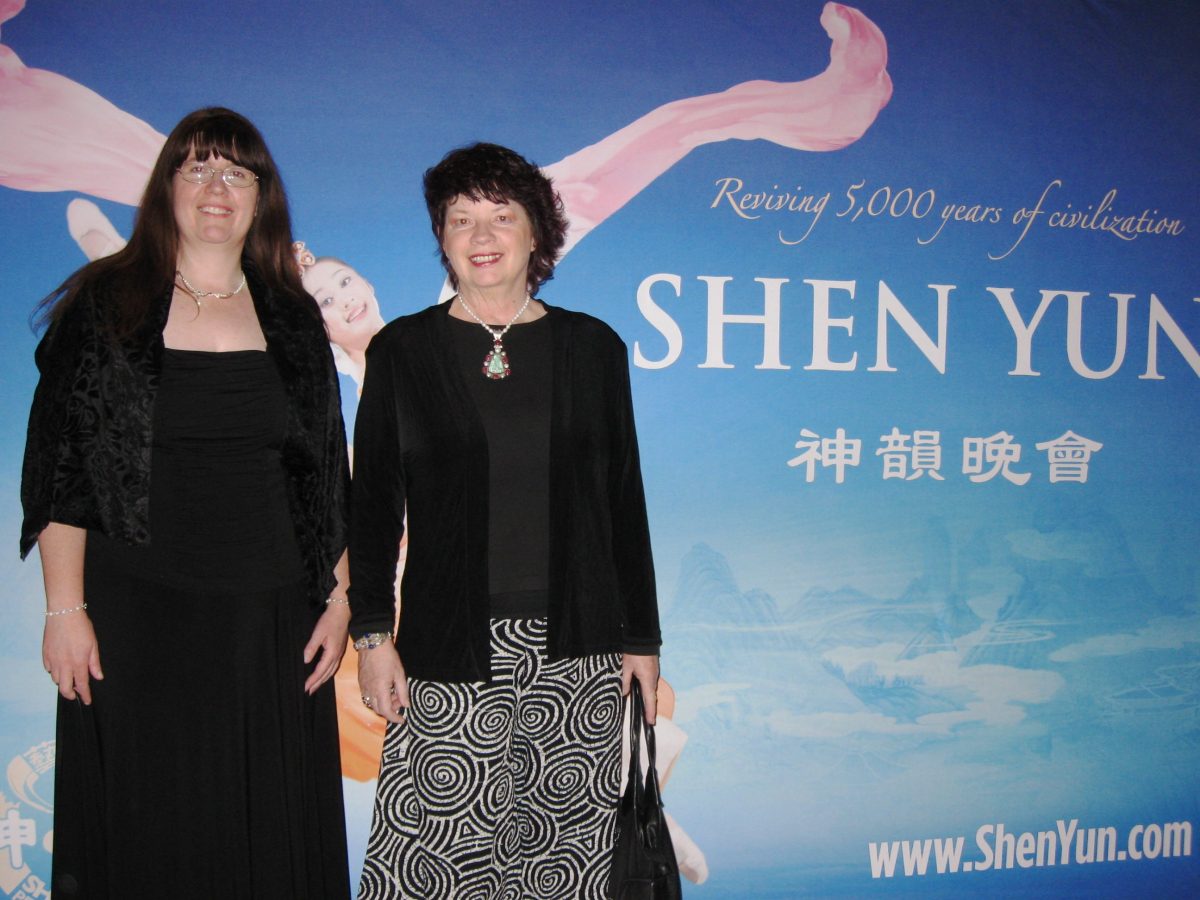 Among those in the audience were dance teachers Donna and Karen House.

Donna, a Middle East dance instructor and dance studio owner in Kansas City, was impressed with Shen Yun performance, the dancers, and costumes.

“I was totally delighted. I loved the color. I loved the movement, the acrobatics. I guess they call them acrobatics, and the dance,” she said. “I’m a dance teacher, so I really enjoyed that.”

According to the Shen Yun website, “Chinese dance is at the heart of what Shen Yun does. Known for its incredible flips and spins, and its gentle elegance, it is one of the most rigorous and expressive art forms in the world. Acrobatics, as we think of the form today, originated from classical Chinese dance.

Donna’s daughter Karen, who teaches ballroom dance, said about Shen Yun: “It was just beautiful. I love the costumes and the dancing.”

“The drums were very exciting, but I love the costumes with the veils,” said Karen.

What impressed her most was the style of dance and the music of the Shen Yun Performing Arts Orchestra which combines traditional western and eastern instruments to create a unique sound.

“Well, if I wanted to learn, I would want to learn how to play [the erhu]; it’s beautiful,” she said.

The performance gave Karen a sense of “butterflies and excitement.”

Donna said, “It was wonderful. I loved it all. I like the ancient instruments they were using and blended with the current day.”

Shen Yun brings to the stage a journey of 5,000 years of divinely inspired civilization through the performing arts.

“I was just amazed with all the history,” said Donna. She summed the experience up with “It’s beautiful.”

Shen Yun’s mission is to revitalize traditional Chinese culture which is synonym for spirituality, a respect for the divine.

“I think it’s wonderful, and someone has to continue their heritage and the dance, someone has to keep it alive and hopefully it can turn back to that spiritual” basis, said Donna.

“I just think they need to go back to that beautiful culture,” said Karen. “It’s a beautiful culture. I’ve always loved the Chinese culture, the people, the costumes and everything about them.”

Both dancers would recommend Shen Yun to family and friends.

Karen said, “Yes, you need to see it at least once. The school is doing a wonderful job. It was very exciting.”

Her mother added, “[It is] something that you would not see every day, anywhere.”