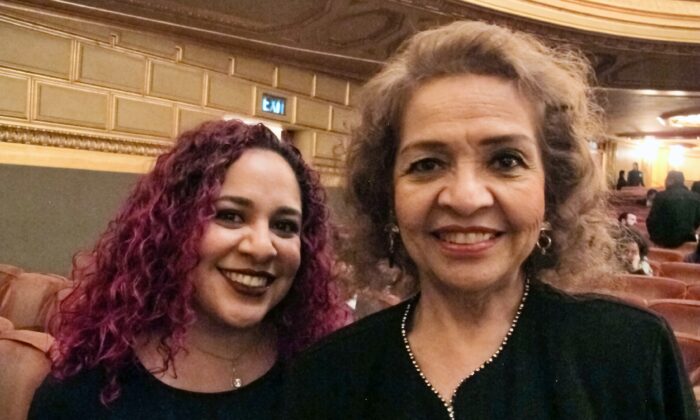 “I’m so grateful to be able to connect to something from my Chinese roots,” she said. “We are actually descendants of Chinese through my mother’s side. … My grandmother was half Mexican, half Chinese, so it’s very important to us.”

Shen Yun is a New York-based company that performs classical Chinese dance and music in theaters around the world. Its goal is to revive the true, traditional culture of ancient China that has been nearly lost in modern times.

Meza, a real estate office manager, attended Shen Yun with her mother at the War Memorial Opera House in San Francisco on Jan. 3, 2020.

Shen Yun’s seven touring companies travel the world with an all-new production every year. Each performance consists of about 20 short artistic pieces, including classical Chinese dances, Chinese ethnic and folk dances, stories told through dance, and vocal or instrumental solos. A live orchestra accompanies the dancers.

“The stories are very well told,” Meza said. “It is concise, and every movement is perfection.”

Shen Yun’s website states: “With its flips and gentle elegance, [classical Chinese dance] is one of the most athletic and expressive art forms in the world. … Only Shen Yun performs classical Chinese dance in its purest form, preserving its traditional aesthetic the way it was originally passed down.”

Meza noticed the expressiveness of the dance.

“They convey every feeling with their movements,” she said.

“I found it very charming. I like the good humor in it, and the music is so, so gorgeous,” Meza said.

Shen Yun’s website explains that spirituality was an important part of traditional Chinese culture, but this aspect has nearly been destroyed through systematic efforts by today’s Chinese communist regime.

Meza admired a Shen Yun dance piece that depicted the Creator speaking to divine beings and leading them to Earth to create Chinese civilization.

“When the Creator came down with all the gods, that was very moving to see the reaction of the dancers, as if He was really here with us,” she said.

Another dance piece tells how the Chinese spiritual discipline Falun Dafa is being persecuted by the Chinese Communist Party. Falun Dafa is based on the principles of truthfulness, compassion, and tolerance, and its adherents in China have been oppressed for their faith since 1999.

“It was very moving to see the tragedy that it is, that they cannot freely express themselves or practice a religion or a faith,” Meza said.

Spiritual themes can also be found in the Shen Yun vocal solos. These songs are sung with the technique known as bel canto, which was once used in singing traditions of both East and West.

“The gentleman who sang the beautiful song about how we are of a divine being here on Earth—that was very beautiful,” Meza said.

She believes it is important to know the stories of one’s ancestors and traditions.

“I feel it’s so important that everybody gets back to their roots. As I said, I’m only a little bit Chinese, but so proud of it. My entire family for generations has been,” she said.

“I highly recommend that everybody see [Shen Yun]. It’s very moving, and I am thoroughly enjoying it with my mom,” she said.

With reporting by Cynthia Cai and Sally Appert.