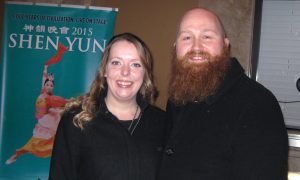 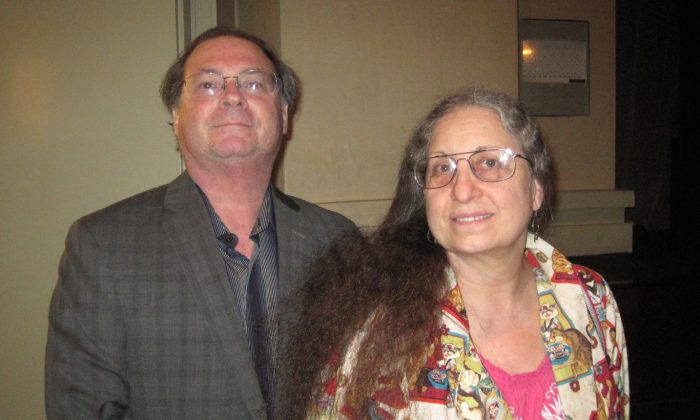 'The beauty of the performance is unmatched, unparalleled'
By Epoch Times Staff
biggersmaller
Print

ESCONDIDO, Calif.—After much anticipation, Greg Weir and his wife finally arrived at the California Center for the Arts on Feb. 21 to see Shen Yun Performing Arts World Company’s performance.

“We always love it. We look forward to it every year,” said Mrs. Weir, who is a veterinary assistant.

Mr. Weir works at the Schiff Medical Supplies company. With much enthusiasm, he explained why both he and his wife have continued to return to see Shen Yun’s all-new production for four consecutive years.

“It’s an uplifting experience. Absolutely incredible. The production is different each year. Exquisite music. The beauty of the performance is unmatched, unparalleled,” he said.

Independent and non-profit, Shen Yun was formed in New York by a group of overseas, leading Chinese artists. Its mission is to revive 5,000 years of true, divinely-inspired Chinese culture through storytelling, dance and music, and share it with the world.

“Through the universal language of music and dance, Shen Yun weaves a wondrous tapestry of heavenly realms, ancient legends, and modern heroic tales, taking you on a journey through 5,000 years of Chinese culture. Its stunning beauty and tremendous energy leave audiences uplifted and inspired,” according to Shen Yun’s website.

Mr. and Mrs. Weir did not keep their love of Shen Yun to themselves, but shared it with friends as well.

Mr. Weir was in awed by the dancers’ high energy. “The exuberance was just so joyful. Even at the very end (curtain call), they came out, and they had so much energy left. It was just amazing what they were doing.”

Shen Yun’s website explains: “Throughout history, almost every culture looked toward the divine for inspiration. Today, Shen Yun’s artists-dancers, musicians, choreographers, and composers, and the entire team-follow this noble tradition. For them, this spiritual connection is the motivation for striving to excel, is the heart behind each movement of the dancer and each note of the musician. It is why audiences can feel there is something different about Shen Yun.”

‘I loved every second of it’

Another audience member enthralled by Shen Yun Feb. 21 was Sandra (she did not provide her last name), who treated her Vietnamese granddaughter to the performance.

“The show is fantastic, and it is very spiritual,” Sandra said. “I feel good. I feel revived. And I feel very thankful that I’ve lived 81 years, and I was able to see this program,” she said.

The morals and spirituality of traditional Chinese culture presented throughout the performance moved Sandra.

One of the dance pieces that touched Sandra was The Power of Compassion, tells the true story of the persecution of Falun Dafa practitioners in today’s China. It highlights how compassion can overcome viciousness and bring unexpected blessings.

Mankind a ‘Reflection of God’

Also among the audience were David Grull, a postal service retiree, and his wife.

This was Mr. Grull’s first time seeing Shen Yun; his wife saw Shen Yun last year and wanted him to see it.

The spiritual aspects of the performance resonated with him. He said he appreciated the humility and compassion displayed in a particular vignette entitled The Power of Compassion.

In this piece, a police officer in modern day China stops terrorizing Chinese citizens after experiencing kindness from the very people he was persecuting. When the kind people taught him to meditate, his injured knee was healed.

Mr. Grull said, “That was tremendous.”