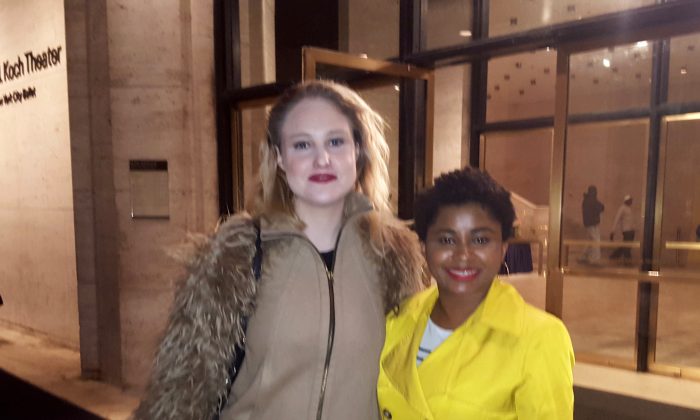 NEW YORK—It was beautiful, it was moving, and it was just electrifying. Brittany Clemons, an associate producer at WNET, had just seen Shen Yun Performing Arts at the David H. Koch theater at Lincoln Center, and felt a happiness that she was quick to share.

First, there was the beauty of the art—classical Chinese dance, vibrant costuming, an animated backdrop. It conveyed a deeper meaning within even “just the subtle movements,” she said outside the theater with her friend Alexandra Singer. “I could sense the feelings, even though I couldn’t see their faces—just in the subtleness of the movements—that it was supposed to be powerful.”

And then beyond that, Ms. Clemons said she was learning things about the traditional Chinese culture she probably would never learn about anywhere else. Before and after each of the 20 performances, emcees had shared a bit of history with the audience in both English and Chinese. Through the history and stories, Ms. Clemons learned that this ancient history of 5,000 years has almost been nearly wiped out.

In the 1960s, the Chinese communist regime began the Cultural Revolution, burning books and razing temples, in a targeted effort to destroy the traditional culture.

This, too, was shown in a story-based dance of Shen Yun, alongside vignettes from the Qing and Tang Dynasties. “I love that they went there,” Ms. Clemons said. She could relate to that spirit, “to fight for what you believe in. I think that’s something we all can [relate to].”

For Todd and Rachel Stevens, the stories were enlightening and profound.

“Of course we loved it!” said Mr. Stevens, a Douglas Elliman broker and the top seller of townhouses in Manhattan since 2004.

It was an eye-opening experience, he said, to learn that the injustices happening in China are ongoing today—that people are being persecuted for their faith under the communist regime. It is not something one thinks about in their day-to-day lives, and “significant, meaningful” that Shen Yun dared to address it.

Mrs. Stevens, a hair stylist, said it was done in a poignant way.

“It just makes you want to cry,” Mr. Stevens said. He recalled one story where an elderly couple were separated, persecuted for their faith, and it seemed to be ending so depressingly. But then a divine scene unfolds, in an ultimately happy and hopeful ending.

Mrs. Stevens said the short story set during the Cultural Revolution, where Red Guards storm a Buddhist temple, had a similarly uplifting effect. The guards had turned to faith afterwards, she said, and “I thought that was really uplifting. It’s a happy ending. It gives you hope that people will change.”

Dipa Ganatra, a pharmacist, was also moved most by what she said was an important cause. Growing up in America, she did not learn very much about Asian history in school.

Yet the performance “touched my soul,” she said.

“It was so spiritual, the performances,” she said. “It was kind of magical, it was absolutely amazing. I don’t even know where to start—the costumes, the color, the philosophy.”

Ms. Ganatra said she had heard about Falun Gong before, a spiritual meditation practice that is still targeted by the communist regime today, and the fact that Shen Yun raised awareness on issues like this was something she wanted to get behind. The fact that Shen Yun couldn’t perform in China, and that people were still persecuted for their faith, was “absolutely horrendous.”

But it was wonderful Shen Yun could bring awareness to people through art, and for Ms. Ganatra, it felt like a call to action. “I would totally support the cause—200 percent—if there was anything I could do.”