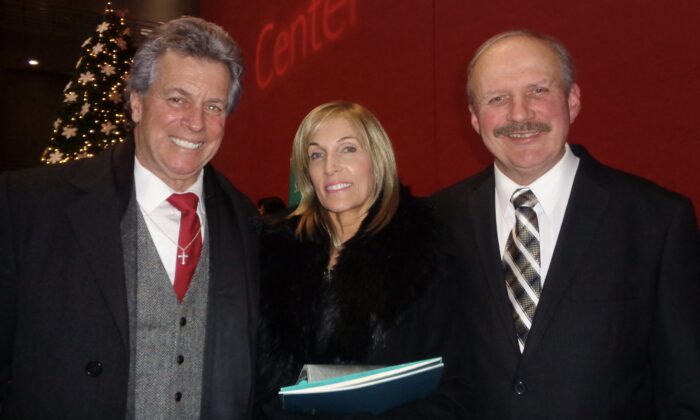 PURCHASE, N.Y.—As someone who attended a Shen Yun Performing Arts program for the first time, Mark Benjamin was taken aback.

“It was the best thing I’ve ever seen. It’s the best performance I’ve ever seen everywhere, anywhere,” he said at The Performing Arts Center at Purchase College on Dec. 21, 2019. The theatergoer attended the matinee performance with friends and also said that he has never seen anything more beautiful.

Benjamin was most impressed by the classical Chinese dancers. He noticed the high level of skill and fitness the dancers presented to the audience in their movements.

“The dancers are just so amazing, and the athleticism of what they can do and what the human body can do and how hard they trained,” he said.

According to Shen Yun’s website, classical Chinese dance utilizes the human body’s natural ability and does not require the building of any specific muscle groups, as ballet for instance does. The dancers engage in normal activities such as running and physical labor to gain strength naturally.

Rick Hudson, Benjamin’s best friend, was also impressed by the dancers. He said, “The dedication was amazing. Everybody put their heart and their soul into everything they did. And I know they do it day after day, but it was like their first performance. They just did a fantastic job. It’s wonderful to see.”

Rick’s wife, Irene, thought the performance was wonderful. She is an author and a former member of the police department. From a literary point of view, Irene said the way the stories were presented was comprehensive but at the same time entertaining.

“They were wonderful, wonderful and well presented easy to understand. So anyone in the audience can understand them. Generally, from children to the elderly, they made it simple to understand but well done,” she said.

Benjamin also admired how the program introduced China’s traditional culture and vast history to him. He appreciated that they took the time and effort to give an introduction and explanation for each dance.

“So if you don’t know about the culture, they brought, they walked you through the whole piece, it was just absolutely beautiful. I totally loved it,” he said.

This is one of the main goals of Shen Yun Performing Arts, to share China’s vast, ancient culture with the rest of the world.

Benjamin bought two tickets for his best friends Rick and Irene to see Shen Yun with him as a Christmas present. After hearing that Benjamin bought a Shen Yun ticket, the two had been interested in seeing the performance as well.

Shen Yun is a classical Chinese dance and music company based in New York. It is comprised of seven divisions that travel around the world every year, and the season typically begins near the end of December, with audiences who have come with friends and family for the holiday season.

With reporting by Yawen Hung and Don Tran.