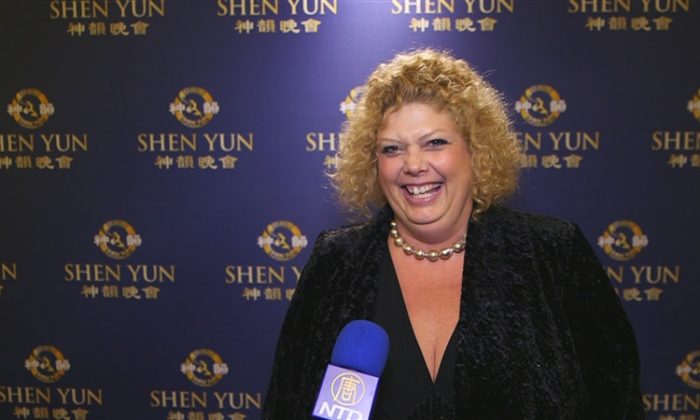 ESCONDIDO, Calif.—”It came highly recommended by a friend of mine. He told me if I wanted to make it to heaven, or find enlightenment, I needed to come see this show to feel that energy and connect with it. I was fascinated by that, and came,” said Ellen Benfatti after attending Shen Yun Performing Arts World Company’s performance at the California Center for the Arts on Feb. 18.

Ms. Benfatti is a contemporary artist who owns her own gallery in San Clemente.

“It was really beautiful,I absolutely loved it,” Ms. Benfatti said about Shen Yun.

“I thought it was fabulous. My friend was absolutely right,” she said after watching the performance.

“New York-based Shen Yun is the world’s premier classical Chinese dance and music company, formed with a mission to revive 5,000 years of divinely inspired culture that has been all but lost under the current atheist communist regime in China,” states the company website.

“The music was so intense that you feel it in your body. It created a wave in my body that made my heart open,” said Ms. Benfatti about the Shen Yun Orchestra, which combines traditional Chinese instruments with Western instruments.

As an artist whose passion is “using color to evoke emotion”, Ms. Benfatti was deeply touched by the colors of Shen Yun costumes and the digital backdrops.

“The colors were amazing. They really spoke to you, very much so,” she said.

“When you mixed the green and the pink, it’s so soft and elegant and yet with the movement of the dancers, it’s very strong. It just touched your heart; it’s so beautiful to look at. If you came in thinking you had a hard day, those colors just made all that melt away,” Ms. Benfatti added.

“Every detail is given meticulous attention and is a result of artistic inspiration and careful polishing,” explains the Shen Yun website. “The designers stress harmonic balance and contrast. Their objective is an authentic presentation of the attire that comes from China’s divinely inspired traditional culture, and a consummate stage effect.”

Ms. Benfatti was clearly inspired by Shen Yun colors shown in the performance.

“I just painted a piece like that, and didn’t know what to name it. I think I might name it ‘Tibet,'” she added.

“The opening dance piece with the magenta and the yellow colors reminded me of my painting called Shambhala, which is the city of God. So when this show opened with those colors, I thought ‘Oh! I’m in for it tonight. It’s going to be good,'” she said.

Ms. Benfatti also commented on the portrayal of Chinese culture and history in the performance.

“I think that I (will) see the Chinese culture differently from now on,” she said.

“Principles such as benevolence and justice, propriety and wisdom, respect for the heavens, and divine retribution, all come to life, washing over the audience. Originating from Confucianism, Buddhism, and Taoism, these ideals are the essence of traditional Chinese culture,” states the Shen Yun website.

Appreciative of her friend who recommended Shen Yun to her, Ms. Benfatti said, “It was really kind of him to speak from his heart, and tell me about this show and the meaning behind it. It’s great to be a part of it. I’m glad to be here. Happy New Year!”

“I was very impressed. This is very impressive. My student treated us to this wonderful show tonight. I’m very grateful to be here,” said Mr. Edwards, after seeing the performance.

With a background in Martial Arts, Mr. Edwards said he enjoyed Shen Yun’s classical Chinese dances, particularly, the Mighty Monk and Monkey King and the Skeleton Demon dance pieces, which, like many other dance pieces, portray stories from China’s rich culture.

“Several thousand years ago, martial arts (wushu) appeared in China. At the time, many types of performing arts were influenced by martial arts movements, techniques, and flips. The original forms of many classical Chinese dance movements were similar to those of martial arts; it was just that they were performed differently and what they required was different,” according to the website.

Shen Yun ‘Makes you appreciate living in a free country’

Lenora Wechter and her ophthalmologist husband came to see Shen Yun with her parents on the recommendation of her husband’s patient.

Since she was three years old, Ms. Wechter has aspired to be a ballerina. She was impressed with the Chinese classical dance and the beautiful costumes she saw in Shen Yun: “It’s a beautiful show. I do love the dancing. The costumes were beautiful; everything was beautiful.”

She felt sad for the people’s lack of freedom in today’s China: “It makes you appreciate living in a wonderful, free country that we could aspire to our dancing, our culture, and our freedom that you obviously cannot have in [China]. It’s really sad.”

Shen Yun ‘Surpasses Anything You Could Imagine’

“We were very excited to come see it. It surpasses anything you could imagine,” said Dotty Radcliffe after attending Shen Yun’s performance with her friend, Harriet Baldwin, on Chinese New Year’s Eve.

Ms. Radcliffe was invited to see the performance by Mrs. Baldwin.

Ms. Radcliffe thought China’s traditional culture portrayed by Shen Yun was wonderful. She said knowing Shen Yun is not allowed in China, she was grateful that Shen Yun can perform here.

Reporting by NTD and Thanh Le