'I'm ready for another day at work' 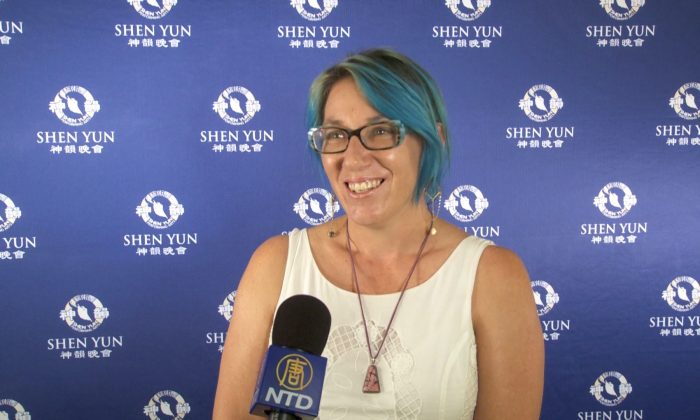 From one extreme to another, Marishka Cross loved it all. She was at the Shen Yun Performing Arts World Company performance on Tuesday Feb. 23, 2016, at the Melbourne's State Theatre

MELBOURNE, Australia—Marishka Cross was having “one of those days” but after a good dose of classical Chinese dance and music at the Melbourne’s State Theatre she was feeling good again.

“I loved it, it was where I was then, and where I am now, very calming and just a positive, positive feeling,” Ms. Cross said.

Although Ms. Cross had never before seen Shen Yun, which launched in New York in 2006, she cried from the opening curtain for “probably the next first 15 minutes,” she said.

“I guess that’s cleansing and cathartic, and then, I guess it’s a delight as a bit of playfulness. It’s like the child in you that loves the colour, and the instruments, and the dancing, and it’s a very positive experience. I loved it.”

Through the universal language of music and dance, Shen Yun weaves a wondrous tapestry of heavenly realms, ancient legends, and modern heroic tales, taking you on a journey through 5,000 years of Chinese culture, the company website says.

“I just loved all of it, I thought that [it] was something new to do and I really enjoyed it,” Ms. Cross said, especially the dance story, “Monkey King and the Dragon Palace.”

“I thought the monkeys were brilliant. They were so real! Obviously, there is such elegance and grace and precision in all of it, and you can just tell that there’s the authentic love of dance and music.”

Inspired by China’s classical novel, “Journey to the West,” the dance story introduces the Monkey King, born from a rock infused with the mystical essence of Heaven, the program book says.

Ms. Cross said the spiritual aspect threading throughout a performance was “critical” to Shen Yun and was “delivered with grace.”

“I think the way it was delivered was the format, the expression, and the intention behind it is enough—if you don’t know anything—to interest people, and if you do, to just reconnect yourself.”

Spirituality was such a wonderful part of Shen Yun, she said, feeling ready to face the world as she was leaving the theatre.

“Awesome! I’m ready for another day at work.”

Work for Ms. Cross is the Corporate Business Development sector at PricewaterhouseCoopers Accounting in Melbourne.

‘I have been to heaven twice today’

For Harry Chan who was born in Thailand but is of Chinese descent, Shen Yun’s beautiful presentation was “excellent, amazing, wonderful,” he said.

Mr. Chan was seeing Shen Yun for the second night in a row. “I feel like I have been to heaven twice today,” he said.

Mr.Chan feels all Chinese people need to see Shen Yun to get to know their ancient 5,000 years of a divinely inspired culture, “a long lost Chinese civilization,” he said.

“To be honest, nowadays, we are all westernised and we don’t know about our forefathers’ culture. At least, today, you [can] feel proud to be Chinese,” he said.

He wishes all of the Chinese from Thailand could make the distance to Australia to see the performance, but fears it is too far.

“For 5,000 years divine culture flourished in the land of China. Humanity’s treasure was nearly lost, but through breathtaking music and dance, Shen Yun is bringing back this glorious culture,”according to the company’s website.

“One day, China will have freedom,” Mr.Chan said.

Shen Yun ‘Is something to be seen really’

Melbourne Lawyer Frank Gambera was also in the audience watching Shen Yun for a second time, having seen the New York-based presentation in Los Angeles in 2009.

But the novel state-of-the-art graphics technology just blew him away.

“I love the backdrop. The backdrop is just a fantastic thing to see, the way they’ve integrated it into the dance, very colourful. It’s novel,” Mr. Gambera said.

Shen Yun’s digital-backdrop team creates vividly animated settings, extending the stage and transporting the audience to a world where heaven and earth are one, evoking a sense of spirituality for Mr. Gambera.

“That’s why the backdrop is important to me. The dancing, that floating on the stage, and that backdrop with those beautiful country scenes,” he said.

And the quick footwork of the dancers was equally amazing.

“It’s the steps and the unison in which they follow through on the whole stage. I think it’s just tremendous the way they’re able to do that. The numbers they use, they’re all in step. It’s something to be seen, really.”

Within classical Chinese dance we find China’s rich cultural heritage. Its movements are deeply expressive such that the personalities and feelings of characters can be portrayed with unparalleled clarity, the program book says.

“From a spiritual sense, it’s the landscape behind it that evokes that sort of spirituality to me, … It’s a great thing to see. I think Shen Yun has really brought it out quite well.”