A message for humanity 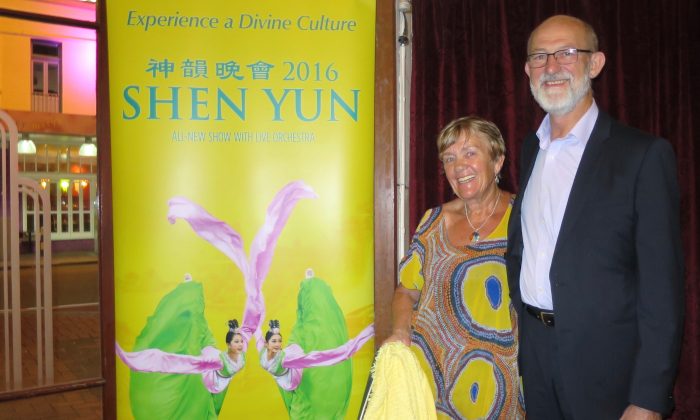 A Christmas gift from their daughter and son-in-law brought Erin and Steven Redgrave to the Regal Theatre to see Shen Yun Performing Arts on Feb. 2, 2016. (Epoch Times)

PERTH, Australia—A Christmas gift from their daughter and son-in-law brought Erin and Steven Redgrave to the Regal Theatre to see Shen Yun Performing Arts on Feb. 2.

The experience of Shen Yun was so much more than they expected.

“They couldn’t have given us anything better,” said Mrs. Redgrave, a nurse. “I loved it! The beauty, grace and movement, lovely music, and harmony, I was quite amazed by it,” she said.

Mr. Redgrave, a nurse manager at Fremantle Hospital, said he has been to a lot of theatre but Shen Yun was something really unique, something that touched his soul.

“The colour of the costumes, and the authenticity of the choreography of the music was probably really something that struck my heart,” he said. “It was very moving for me, and a very genuine experience tonight—It blew me away.”

Shen Yun is based in New York and has a mission to revive traditional, divinely inspired, Chinese culture. Through music and dance it takes you on a journey of 5000 years giving you insights into the culture.

“Sophisticated dance techniques, an orchestra joining instruments from both the East and West, beautiful costumes, and a stunning back drop—this is Shen Yun at first glance,” the Shen Yun website states.

A Shen Yun performance incorporates classical Chinese dance, folk and ethnic dance as well as dance stories. One story dance in particular touched the hearts of the Redgraves, “The Mystical Udumbara.” Ancient Buddhist scripture speaks of the Udumbara flower, which blossoms but once every 3000 years.

A flower that awakens every 3000 years, that’s like our rise in consciousness and our spiritual values awakening.
— Erin Redgrave

“The messages of the human consciousness awakening, the movement and the beauty of it all. I loved it all,” Mrs. Redgrave said. “A flower that awakens every 3000 years, that’s like our rise in consciousness and our spiritual values awakening. I think there’s a spiritual message in that of humanity, of where we need to go and continue to go.”

Mr. Redgrave added, “The awakening of the human consciousness … The colour, and the choreography, it just absorbs you. You just become part of that … It was quite special.”

Mr. Redgrave found Shen Yun was a very moving performance and he wanted to thank the performers.

“We are incredibly privileged to be honoured to be so close and enraptured by their [Shen Yun] performance tonight and I would just like to say thank you very much to the performers and I’m truly honoured to have had the opportunity,” he said. “We live in a country where we are highly privileged, and to have seen the Shen Yun show tonight … it’s an honouring of humanity, and I think that’s what the performers are really doing in very much a global sense and a cosmic sense, awakening the spiritual sense of people.”

Mrs. Redgrave agreed saying, “Harmonious and in keeping with our essence of what we really all are about. It was delightful, it was a pleasure to be part of it.”

One story dance depicts the current day persecution of Falun Gong in China. Mrs. Redgrave was felt it came with a message of hope for humanity. “Goodness will create more goodness … that even with oppression, good always rises.”