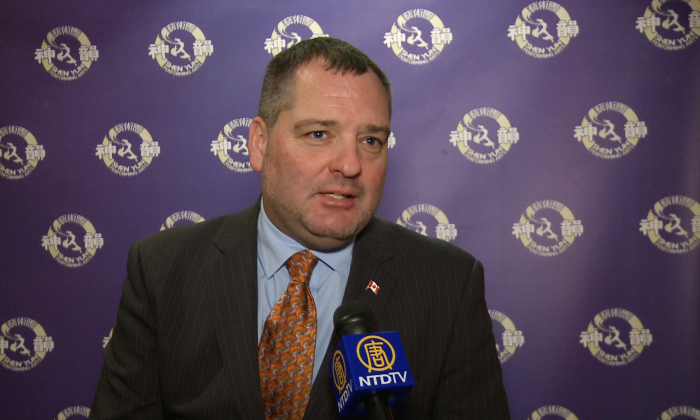 MISSISSAUGA, Canada—Brad Butt, Member of Parliament for Mississauga-Streetsville, had a message for Canadians after seeing Shen Yun Performing Arts at the Living Arts Centre:

“If you ever get a chance to come and see this performance, please come—it’s a wonderful experience,” he said after the Jan. 18 evening performance.

“We had a great night tonight and the more we learn about our friends around the world and other cultures, the better.”

Mr. Butt said the fact that Shen Yun was sold out for all five Mississauga shows was a testament to the draw of China’s fascinating 5,000-year-old culture.

“I think that says something about the city of Mississauga and our interests and our love for the Chinese people and the culture,” he said.

“It’s a fascinating and incredible history that Chinese culture and people have. The more that Canadians understand that remarkable history—especially with the very large Chinese diaspora we have here—the better we all are.”

Shen Yun managed to distill thousands of years of culture and history into the two-hour performance, he said.

“I certainly learned a lot,” he said.

“There’s excitement and wonderful things and turmoil and challenges in all of our cultures in the history that we’ve had—so to get an appreciation for all of that over 5,000 years was incredible.”

New York-based Shen Yun is the world’s premier classical Chinese dance and music company. Formed in 2006, it has grown to four touring companies that simultaneously perform around the world. Its mission is to revive China’s divinely-inspired culture.

“The fact [Shen Yun] is touring all over, to different continents, different countries, and of course coming here to Mississauga, I think its extremely important,” said Mr. Butt.

“I think its very very important because we learn a lot from history and the saying goes, those that don’t pay attention to history, doomed to repeat it. So we can learn so much.”

In addition to the cultural and educational values, Shen Yun was aesthetically stunning and exciting to watch, said Mr. Butt.

He was struck by Shen Yun’s trademark digital moving backdrops, which use state-of-the-art graphics technology to create vividly animated settings. Those scenes extend the stage and sometimes interact with the dancers.

“Having the animation in the background was really a special way of making it all come to life,” he said.

The landscapes in the backdrops reflect China’s “multifaceted geography, society, regions, and dynasties,” according to the Shen Yun website. “Some scenes even transcend this world, entering a heavenly palace where fairies dance amidst mystical clouds or peering into the solemn majesty of a Buddhist paradise.”

“It was incredible, great stuff.”

The traditional Chinese values expressed in the story-based dance were universal, said Mr. Butt, adding he will take home a deeper appreciation of the similarities between cultures.

“I think basic human values are the same all over the world. Everybody wants to live in peace and security, love thy neighbor, be involved, raise your family, want the best for the generation after you, we all want that,” he said. “So Chinese culture and Canadian culture are not that much different in that regard—we very much understand the same basic principles about human dignity that we all share.”