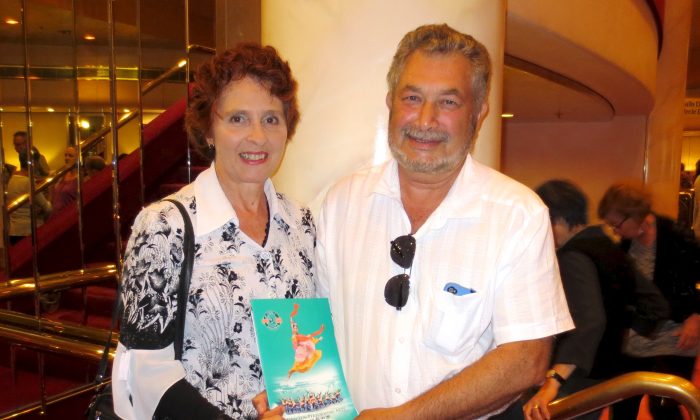 MELBOURNE, Australia—”We thought it was terrific,” said Rawdon Sthradher when he attended Shen Yun Performing Arts with his wife on Feb. 28 at the Arts Centre Melbourne, State Theatre.

“The dancing was fantastic and I think the fact that they’re all in sequence, all in time, that was fantastic,” Mr. Sthradher said.

“It’s very precise, everyone was perfect with their timing and their costuming was just amazing,” added Ms. Sthradher

They both admired the synchronisation of the dancers and imagined that it would be were hard work to reach such a high level.

“I think the choreography and the way they put it together was quite a magical experience,” she said.

Shen Yun uses state of the art digitally animated backdrops where dancers appear to enter into and emerge from, adding an extra dimension to the performance and bringing breathtaking landscapes and heavenly realms to life.

Mr. Sthradher is a photographer and video producer so he really appreciated this aspect of Shen Yun.
“That was really good actually, I loved that. It was seamless, everything sort of happened quite smoothly, there was no glitches. It was really good,” he said.

“I think visually it was breathtaking, it had lots of really interesting elements.”

Mrs. Sthradher added, “I think that was very clever.”

Annabel Speirs, a solicitor was also at the performance.

“It was excellent. The costume, the dancing. It was wonderful. I’m really glad it’s here in Melbourne,” she said. “The precision! The performance is amazing.”

Shen Yun is based in New York with a mission to revive the ancient Chinese culture which has been largely destroyed since the Cultural Revolution.

Ms. Speirs was most impressed with the classical Chinese dances and the depiction of 5000 years of history.

“The energy was excellent and it was amazing to see traditions that lasted for so long,” she said.

She thought the combination of the East and West instruments in the orchestra was quite unusual and felt that they really complemented each other.

Another element that intrigued Ms. Speirs was the hi-tech digital animated backdrop that interacted with the dancers.

“The backdrop was incredibly creative, and it really brought it to life,” she said. “It’s so artistically presented.”

Ms Speirs said that Shen Yun has definitely inspired her to find out more about the traditional Chinese culture. She said she would encourage her friends to attend the performance.

“It’s an excellent way to explore the Chinese culture today in the setting that displays the challenges of living in China today.”

Tony Caillard came to the performance with his wife Georgina and friends Rafiq Ali and Azima Ali.

Mr. Caillard is a lawyer who owns a law firm that specialises in business law services.

He felt it was important for people to be aware of the present day oppression in China and felt the medium of the arts was an effective means to convey that message.
“Very powerful, very peaceful and I think very effective,” he said.

Although Shen Yun has performed in over 100 countries around the globe, due to the systematic destruction of the ancient culture by the communist regime, they are not able to perform in China.

Being an engineer Mr. Ali was amazed at the digital animated backdrops where it seemed that people disappeared into the clouds.

“That was wonderful, that was very well done and a very soothing and a very nice mix of instruments, almost felt like meditating there getting into a very relaxed moment.”

Ms. Ali is a teacher and she felt that it opened her eyes to another level of teaching, storytelling through music and dance, rather than just using story books. She found the whole experience very inspiring.

Ms. Caillard loved the colourful costumes and really enjoyed the energy of the men’s dances with all its leaps and jumps.

“I loved the costuming,” she said. “I’m impressed when people can synchronize their motions like that, the amount of practice is amazing.”