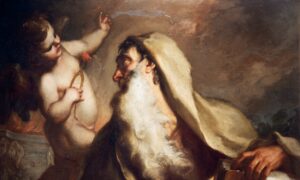 Signs and Wonder: King Ahaz and the Prophet Isaiah
0 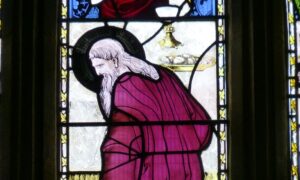 The Patron Saint of 'Woke' and Virtue-Signaling
0 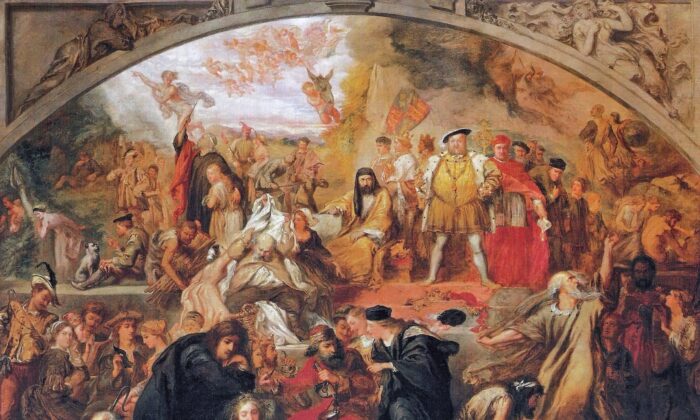 How did the plague influence the writing of Shakespeare’s plays? Sir John Gilbert's 1849 painting “The Plays of William Shakespeare,” containing scenes and characters from several of the Bard’s plays. Daheesh Museum of Art. (Public Domain)
Literature

Shakespeare and the Plague: What Do We Learn?

In times of great suffering
By James Sale
Print

Does anyone now remember what was highly significant in England, circa 1592–94? Or how about 1603–04? No? What about 1605–06? Historians among you might want to say that in 1603 Queen Elizabeth I died and James I ascended the throne. That was significant for England and Scotland, but that’s not the answer I am seeking. What I am thinking about here is the same event that occurred in all three instances, in other words, an event that was recurrent. And the answer is, of course, the plague.

Indeed, the plague was an annual visitor to England, and London in particular; but it was particularly acute in 1592–94, 1603–04, and 1605–06. And this had huge consequences for Shakespeare. For when the deaths reached 30 per week, the theaters were closed, and so effectively, it would seem, Shakespeare was out of his livelihood.

What was the plague? According to Columbia English professor James Shapiro in “1606: William Shakespeare and the Year of Lear,” it was an infection “caused by Yersinia pestis, a strain of bacterium transmitted either through the bite of an infected flea (invading the lymph nodes and producing painful swelling or buboes) or by an infected person’s cough or breath, a mode of transmission that rapidly led to lung failure. The fleas were carried by rodents, especially rats.” Perhaps what is most scary here is not so much the rats, but the cough (or even breath) of an infected person transmitted to another—just like the CCP (Chinese Communist Party) virus, commonly known as novel coronavirus.

Nobody, therefore, wants to pretend that the plague is a good thing; but as I mentioned in my last article on Dante and CCP virus, without the Black Death, the modern world would have been seriously deferred, if not impossible.

Furthermore, from Shakespeare’s perspective (and ignoring the possibility that his own son, Hamnet, died of the plague in 1596), as Shapiro again puts it: “We know a great deal more about how a rodent-borne visitation in 1606 altered the contours of Shakespeare’s professional life, transformed and reinvigorated his playing company, hurt the competition, changed the composition of the audiences for whom he would write (and in turn the kinds of play he could write) and enabled him to collaborate with talented musicians and playwrights—an outbreak of plague that may also have come close to killing him.”

Eh? What was that? That the plague of 1606 had many professional and commercial benefits for Shakespeare? Yes, it would seem so.

We can look at all three plague periods and probably conclude that Shakespeare found some benefits in them. Taking all publication and performance dates from authorities Professors K. Muir and S. Schoenberg, we might note that at the end of the 1594 period, Shakespeare’s “Venus and Adonis” was published. This was the work that established Shakespeare as the leading poet of his day, and was a huge bestseller; nine editions were published in his lifetime alone. It is generally accepted that it was composed during the theater shutdown. The publication’s other huge benefit was that it almost certainly cemented Shakespeare’s famous relationship with the third Earl of Southampton. And we note, too, that in 1594, his play “Love’s Labor’s Lost” was also produced which, while not one of his greatest plays, contains much fabulous poetry and dramatic inventiveness. How productive Shakespeare had been!

Note, too, that in 1594 there was a big increase in plays printed. As Muir and Schoenbaum explain it, “The probable explanation of the sudden increase in printed plays in 1594 is that the companies were so disorganized by the plague that they raised money by selling their MSS.” What we are saying here is probably that the survival of many plays from this period depended on the common sense of the theaters as they sought other ways of making money: Selling manuscripts obviously was lucrative.

Following on the plague of 1603–04, we start arriving at the truly greatest period of Shakespeare’s achievements: “All’s Well That Ends Well” and “Othello” were produced, and the second quarto of “Hamlet” was published. Incredible works. Then in 1605–06 we got “King Lear” and “Macbeth.”

The point is that the plague forced Shakespeare to rest, recuperate, and write more—to go from one great height to an even sublimer one. And this is the lesson we need to learn from Shakespeare.

We Can Be Shakespeare!

The leading UK financial journalist, Matthew Lyn, asked this question recently: “What do the following businesses have in common: IBM, Disney, Uber? The answer is simple. They were all founded during a deep recession.”

“The timing of some of these breakthroughs were coincidences. But many were not.”

What I am getting at is that plagues and pandemics are not welcome: People will die, Gross National Product will decline, businesses will go to the wall, and fear will be endemic. And yet in such times as these, the lessons of history and of great and not-so-great human beings are clear: Here is our chance for maximum productivity, invention, creativity, and yes, greatness too.

Our consumer society is like some farmer who has simply exhausted the land. In Shakespeare’s time, they all practiced crop rotation, which is the growing of different crops in succession on a piece of land to avoid exhausting the soil and to control weeds, pests, and diseases. Usually, as well, it involved a piece of land that is not grown in at all, so the land could recover. Think of it as a kind of Sabbath: the one day a week (or, for the land, one year in three, five, or seven) when we really mustn’t work if we are to sustain our vitality.

We are being forced now to have a Sabbath, as it were. But instead of living in fear, worry, and anxiety about it—all useless and non-productive emotions in this context—we need to embrace Shakespeare’s pragmatic attitude: We can develop ourselves, we can develop our people or our employees, we can develop new products and services, we can innovate and create, we can solve problems that we have not had the time to before, and—heck!—we can even write that book that we always said we would. We can be Shakespeare!

What a good month to be Shakespeare too! April 23 celebrates his birthday (1564) and his death day (1616). Thank God that in the midst of all that plague and human destruction, he kept to his course and fulfilled his mission.

Now let’s fulfill ours so that in years to come, people will write about the incredible creativity and inventions by those of us who lived during the pandemic. This terrible calamity may prove in the future—for all its fear and death—to show the true mettle and greatness of the peoples who were afflicted.