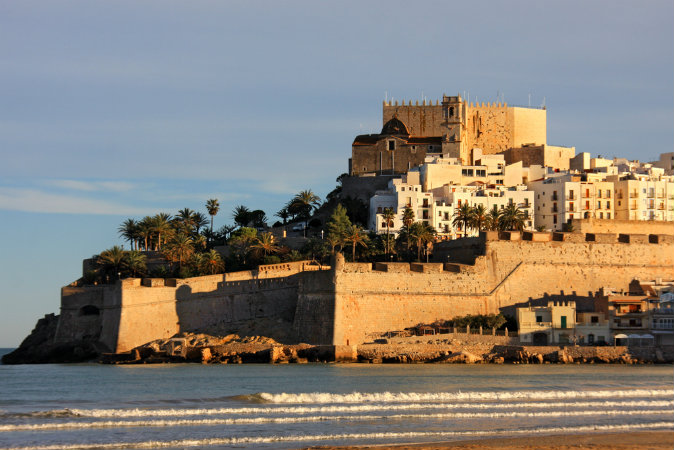 There’s so much more to Spain than the Costa Del Sol, the Costa Blanca, Barcelona, Ibiza, Majorca, Seville and Madrid. In fact if you wander a little off the beaten track, away from Spain’s notorious tourist destinations, you’ll find a wealth of aesthetic delights, cultural wonders and culinary pleasures. The country is dripping in tempting destinations, many of which the average tourist is unaware of. This article is the first in a series called Secrets of Spain, which will feature a combination of seaside, city and inland destinations.

Rising majestically from the sea is the old town and Templar castle of Peñiscola, which is one of the jewels of Spain’s Orange Blossom Coast. It’s a unique, impressive sight during daylight hours, which can be enjoyed from many miles away. However once night falls, the darkness that embraces the beautifully lit, fairytale castle makes the scene even more spectacular and romantic. There’s no wonder that Peñiscola is officially one of Spain’s prettiest towns.

Sunbathe on Golden Sand Under a Fairytale Castle

Imagine sunbathing on the main beach, that looks up at the fairytale Templar Castle, which became a Papal Palace after Papa Luna (Antipope Benedict XIII) moved there in 1411. Peñiscola’s main beach meanders on for miles of mostly fine golden sand, which is flanked by an immense choice of bars, restaurants and hotels.

Copyright © 2015 by A Luxury Travel Blog. This article was written by Jackie de Burca and originally published on aluxurytravelblog.com.

*Image of Peniscola, Spain via Shutterstock