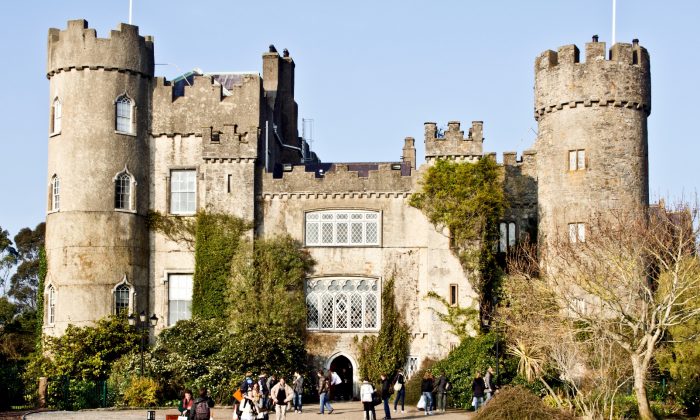 Seals, Puffins, and a Haunted Castle: A Day Trip From Dublin

The waves are rough and choppy and the wind and sea spray whip my hair and face, but I feel a tremendous sense of exhilaration. It’s early fall, a little past the peak tourist season, and I’m out on the Irish Sea in a fishing boat-turned ferry boat with our guide Leona Flynn and a few travel writer and blogger friends.

We are on our way to Ireland’s Eye, a small island off the coast of County Dublin, Ireland. Just a few kilometers away from Dublin city and the charming port of Howth, Ireland’s Eye has the feel of a wild, remote island and could well be the setting of a children’s adventure story.

Completely uninhabited, the island doesn’t even have a real landing dock or steps to make it feel “developed” and “touristy.” As we reach our destination, Greg Doyle, who mans the boat with his assistant Michael Murphy, drops anchor. The two men hold the boat steady while we clamber up the rocky coast to explore the island.

Ferrying travelers from all over the world is all in a day’s work for Greg, who owns and operates Island Ferries, the ferry service between Howth Harbour and the island.

“I’ve done this since the age of 12 just like my father and grandfather before me,” he says. “I love the outdoors and enjoy being on the sea. It’s no longer just a job for me.”

It’s easy to see why Greg is so passionate about his work. The island and the sea around it are a bird-watchers’ and nature-lovers’ paradise.

We spot seals cavorting in the water. Some birds with bright orange beaks and feet are swimming and diving for fish. Greg, who knows the flora and fauna of these parts as well as any biologist, informs me that they’re puffins.

Exploring Ireland’s Eye is an adventure in itself. We wander around aimlessly with no headsets and no interpretive tapes to distract us. Except for the remains of a tower and an 8th-century church, there is no sign of human habitation. Only puffins, falcons, gulls, cormorants, gannets, and other birds are left to contemplate the beauty of the UNESCO-designated biosphere that is Dublin Bay.

When we’re finished exploring, we climb down gingerly from the steep, rocky shoreline back to the boat. Greg and Michael take us back to Howth Harbour in about 15 minutes.

In picturesque Howth, which is overlooked by the historic St. Mary’s Abbey ruins, we follow one of the narrow streets that lead from the busy harbour to the top of a steep hill. The mist has cleared and we’re rewarded with stunning views across Dublin Bay.

On weekends, there’s a lively farmers market here that sells everything from homemade chocolates to handmade jewelry.

Sadly, this is not a weekend, so we break up into little groups and console ourselves with lunch at some of Howth’s excellent fish restaurants. I choose the elegant Aqua Restaurant. I can’t decide which I like more—the flavourful seafood chowder, chock-full of organic salmon, cod, and smoked haddock, or the spectacular view across the Bay. I feel as if I am on a luxury cruise liner.

I’d love to linger over an Irish coffee, but Leona reminds me it’s time to go.

We depart by coach for Malahide, another seaside town on Dublin Bay. Our destination is the Norman-style Malahide Castle, home of the aristocratic Talbot family until 1972, but now publicly owned.

Set in 250 acres of grounds that include imaginatively designed gardens, the stately home has core structures that date back to the 12th century and has all the appearance of a classic fairy tale castle.

Bronwyn, the tour guide, greets us at the entrance. As she takes us through the bedrooms, the magnificent dining room with 18th-century Irish furniture, and the portrait gallery, she convinces us that life in the castle in its heyday was far more dramatic than any fairy tale.

Staunch supporters of King James II, who was Catholic, the Talbots challenged William of Orange, the Protestant leader, in the Battle of the Boyne on July 1, 1690.

Bronwyn narrates the story of that fateful day. Fourteen Talbot men rode to battle after breakfast, and none came back for supper. William’s forces triumphed, James fled the country, and the Talbot women were left with their sad memories.

“Miles Corbet, Cromwell’s friend, took over the Talbots’ home for a while and his ghost still haunts the castle,” she says, her voice dropping to a hushed whisper.  According to local lore, the castle actually has no less than five ghosts roaming its stately halls and rooms!

We have tea at the classy Avoca Café within the castle precincts, after which we browse the gift store and then wander around the gardens, lovingly created by Lady Isabel Talbot who came to live in the castle in 1902 when she married the fifth Baron of Malahide.

I go back to my Dublin guest house that evening with a collage of memories of the day—of nature, culture, and history, with lilting Irish voices making the history and local lore come alive.

Someday I will come back again to experience all of this—and for the mouth-watering food.

Susan Korah is a freelance journalist based in Ottawa. She holds a Master of Journalism degree from Carleton University and writes on Canadian and international politics, as well as travel and lifestyle.