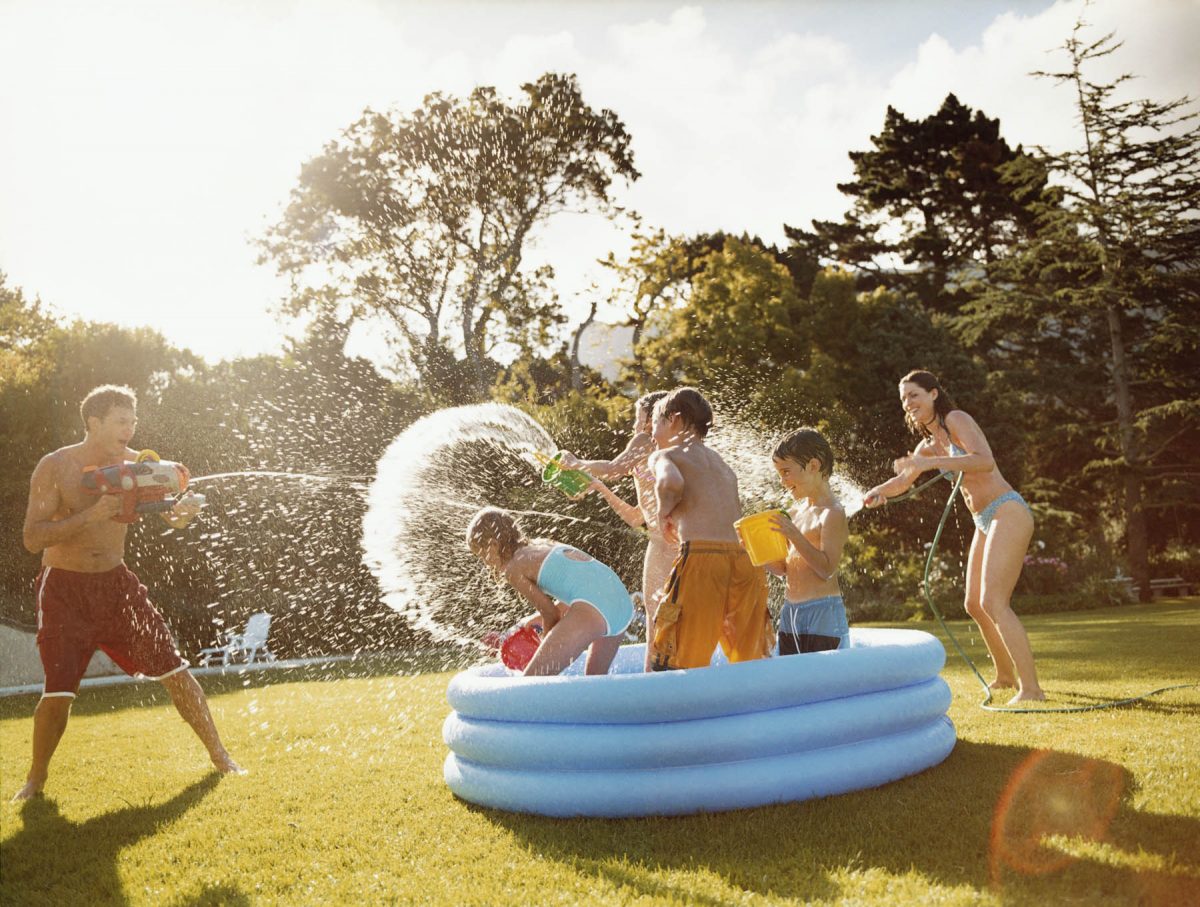 Rule number one is to remember that the television is not a babysitter while mom or dad catch up on work or social media posts.

Katy Mantyk is a mother of two: 5-year-old Penny and 7-year-old Oliver. She is a writer who works from home, but her TV etiquette is set in stone.

“It’s really important that my crutch is not TV. We have a limitation on screen time for our children. In summer it’s about 45 minutes so that they get to watch an episode of something each, or a whole movie on Netflix or a DVD,” said Mantyk.

Outdoors and Away From the City

If you’re leaving the city for a getaway in the countryside, you might as well take full advantage of natural surroundings because the possibilities for fun are really endless and improvisation is key.

Outdoor activities are easy to instigate but harder to control. Still, bike riding, making mud pies, playing with the water hose, are all part of childhood.

The advantage of having a backyard is that the kids can play semi-unsupervised under the distant yet watchful eye of at least one parent.

Last summer Mantyk, who lives upstate in New York, initiated an outdoor game that appealed to both her children as well as their friends, albeit all under the ages of 7.

“I got a big ice tub and filled it with water and bubble bath soap. They would sit in it and play “hair salon.” They washed each other’s hair, conditioned it, and then used the hose to rinse it off. The boys liked the attention when it was their turn to have their hair washed,” said Mantyk.

She noticed that in general, boys need a clear task, they need to feel motivated about what they’re doing. Girls are somewhat better at organizing themselves.

Another “game” that was a success according to Mantyk, was planting a mini-garden. It was a project where the build-up to it was as much fun as the actual planting. The added bonus was that it taught the children the idea of future gratification and watching something grow while taking responsibility for it.

“We started by planning and talking about it, then went to the garden supply shop together, we prepared the dirt, and then I showed them how to plant. They dug the holes and planted the flowers themselves. Throughout summer I had to encourage them to get their watering can and water their plants,” said Mantyk.

Time to Explore Your City

For New York City dwellers take note that while Manhattan may be the heart of the city, summertime is perfect for exploring the sights and events that happen in many of its other parts and suburbs.

Among New York’s many museums are some kid-friendly ones that host special events and camps over summer.

Among them is the Children’s Museum of The Arts that holds many weekly workshops where children can learn artistic techniques. The museum also hosts the CMA Summer Art Colony Day Camp on historic Governors Island. Students between the ages 6–15 can immerse themselves in full-day, innovative arts courses taught by professional artists. Classes run June 16–August 29, 2014.
http://cmany.org/

The Waterfront Museum and Showboat Barge in Brooklyn is currently hosting the “From Shore to Shore: Boat Builders and Boat Yards” exhibition where kids can climb aboard Red Hook’s historic wooden barge. They can learn about boat building and explore the worlds of craftsmen and the places where boats and ships are still being worked on today. Until July 12.
http://www.waterfrontmuseum.org/

The Intrepid Sea, Air & Space Museum has exhibitions and activities for the whole family including The Exploreum Interactive Hall with 13,000 square feet of interactive exhibition space, designed for kids of all ages.
http://intrepidmuseum.org/

The American Museum of Natural History is another family-oriented museum. Currently, exhibitions include Pterosaurs: Flight in the Age of Dinosaurs, Mysteries of the Unseen World, The Butterfly Conservatory, Picturing Science: Museum Scientists and Imaging Technologies.
http://www.amnh.org/exhibitions

A rainy or sweltering hot day calls for card games, inside tent building—an oldie but a goodie-and because kids have extra energy to spend, the Nintendo Wii will come in handy. In Nickelodeon Fit kids can bike with Dora, then jump rope with the Backyardigans, and Nick Fit is designed to get even the youngest kids (ages 4 and up) moving, with inspiration from their favorite Nickelodeon characters.

Barbeque Party is a brand new game. You never know when this temperamental grill may jump, causing all your food to fall off. Players choose a card that tells them what to put on the grill (corn on the cob, chicken, veggies, hot dogs, etc.). If the grill pops your dinner spills everywhere! The winner is the first player to get three items off the grill before it knocks everything off. http://bbqpartygame.com/

The popular Pop the Pig provides hours of belly-busting, constructive enjoyment. With a roll of the dice, players take turns feeding the pig hamburgers as his belly slowly but surely expands with each bite. Whoever pops open his belt wins! Completely kid powered—no batteries required. Ages 4 and up. http://www.popthepig.com/

Just released is the hilarious family game called Google Eyes. Be the first team to finish by winning the drawing challenges while wearing the zany vision-altering glasses. The glasses come with three sets of lenses that range from mild changes to mind blowing fun. For ages 7 and up. www.googlyeyesgame.com

Jumping Jack will trigger tons of laughter, especially in younger kids. See how many carrots you get to pick from Jack’s bunny hill without making him jump out of his hole! If he jumps on your turn, be sure to catch him. If he’s not caught, whoever has the most carrots wins the game. For ages 4 and up. http://jumpingjackgame.com/

If all else fails, Katy Mantyk’s indoor rainy-day plan involves a very springy mattress. “We drag it out into the middle of the living room and they jump off the couch onto the mattress. I put on music and they dance and jump to the music. It’s mayhem but they need to get their energy out.”