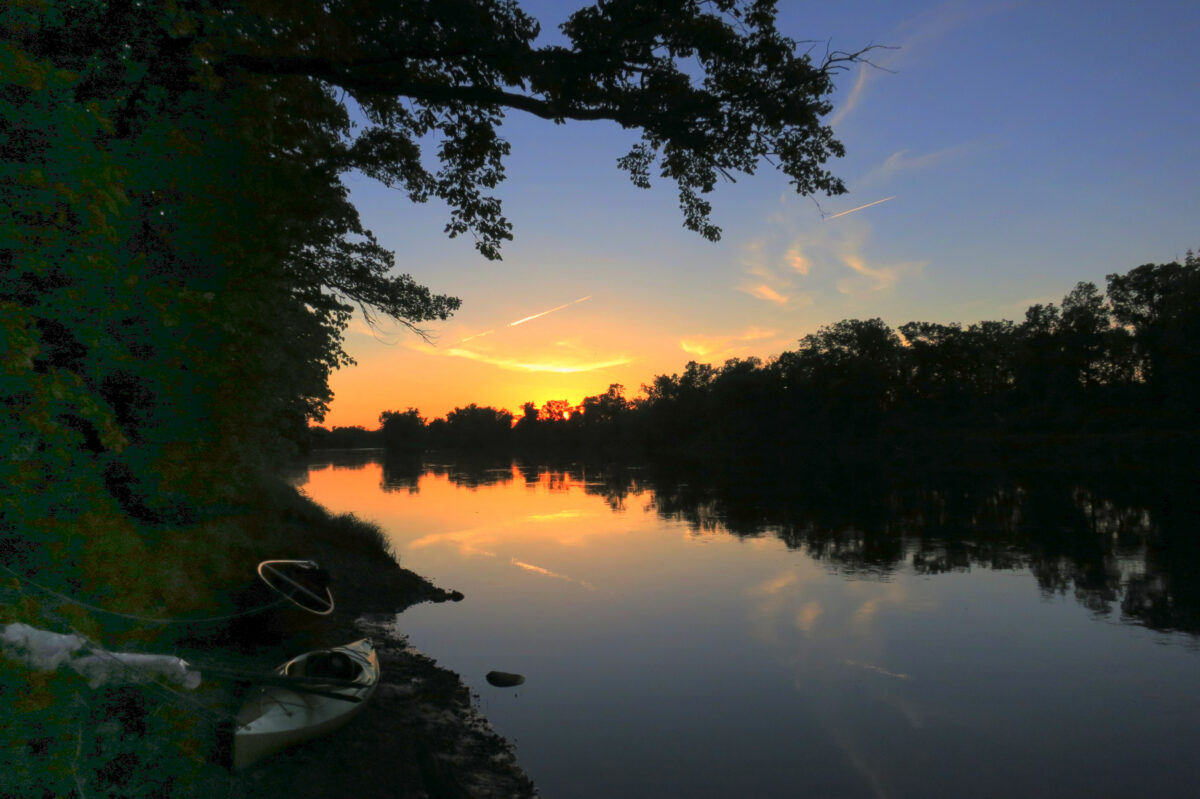 Scenic and Wild Paddling in Wisconsin

Deer stand in the shallows pausing for a morning drink, their heads and white tails popping up as we appear like ghosts out of the morning mists in our canoes. They leap nimbly into the brush and are gone. Great blue herons are already poised on rocks and low branches, stone still as they prepare to snatch breakfast. Each one lifts like an angry little dinosaur, croaking with annoyance, yet flying only a hundred yards downstream where we can scare them up repeatedly until they circle around upstream. Eagles perch in the upper branches and we spot several of them each day. We hear beavers in the evenings, banging the earth like a hollow log. Fish jump and stir and turtles slide off their rocks or drop like cannonballs from higher perches on downed trees leaning over the river. We are on the final 30 miles stretch of the Namekagon River, before it flows into the St. Croix.

The St. Croix and the Namekagon rise up as modest streams in northwestern Wisconsin from where the watersheds divide. Just beyond the headwaters, everything flows ultimately to Lake Superior. But these two rivers flow south, destined to merge to and eventually give themselves over to the Mississippi. Those two tributaries, plus the resulting wider river, which soon becomes the state border with Minnesota, combine for a total of 252 miles designated as the St. Croix National Scenic Riverway.

The mission and guidelines of their preservation were guaranteed in 1968, when President Lyndon Johnson signed the Wild & Scenic Rivers Act. Today the National Wild and Scenic River System protects “vestiges of primitive America,” totaling 13,413 miles on 226 rivers in 41 states. Like the St. Croix they are kept from development “for the benefit and enjoyment of present and future generations.”

Camping in the Wild

Old friends chatter each night around a fire fueled by fallen wood gathered from our surroundings. Firewood: one less thing to pack. A whippoorwill perches above our tent the second night, nearly driving us mad with its call, until it too falls silent. But there is no actual silence. At a minimum the symphony of crickets and frogs, or the bubbling water over the backs of smoothed rocks along the banks and the wind stirring leaves and whispering through spruce. Minus a whippoorwill, this all becomes white noise for a pleasant night’s dreams. We could be 100 miles from civilization, but are more likely less than half a mile from a state highway that meanders roughly parallel to this river. This is what I love about Wisconsin.

With few exceptions, the rustic campsites are “paddle-up,” only reachable from the water. You cannot reserve them, but they are free for the picking and include a fire ring, picnic table, and what I like to call an “out”: an outhouse minus the “house” part so you sit on your throne, royal master of the forest, communing and commoding with Mother Nature.

Other than the three bridges we pass under along our Namekagon segment, the only other signs of the human world were the undeveloped landings and the 35 square signs, smaller than postcards, marking where rustic campsites lie in the woods a few steps from the river bank. We didn’t see a single soul on the river until day three, when we came upon Department of Natural Resources folks from the Minnesota side on the St. Croix and a few anglers on the much wider river.

The lack of easier access and the fair number of sites gives me the confidence to paddle each day not entirely sure of where I’m going to camp. Good maps, provided by the National Park Service, help you decide when to stop at an empty site or risk paddling on for a couple more to see if they are unoccupied.

The mode of transit also affects packing. Obviously we can’t just pull up and unload every little thing from a car at a tent site 20 feet off the park road. What you bring—and that includes your drinking water unless you have a purification method—must both fit in the canoe or kayak and not weigh so much that you end up scraping over rocks for a few days—not fun. Dry bags are also a necessity, even if you never tip, as the paddling inevitably brings water into contact with your gear and there’s no shelter on a river when rain catches you.

The upper stretches of both of rivers are playful, with riffles or Class I rapids still navigable for less experienced paddlers. However, a few dams farther upstream toward the headwaters require portages—though those are clearly marked and landings are good.

We chose to skip all five dam portages on the Namekagon and the long stretch of flat water at Trego Lake.

A park ranger had suggested we should plan for 10-15 miles on a typical day—we take advantage of the 2 m.p.h. current and with little effort average over 4 m.p.h. That information can inform your trip planning. We chose to cover more river miles, so after putting in just two miles the first day, we rose early and set up camp late after paddling 35 miles on day two and 25 more on day three. We were out of the water just after lunch on day four, after covering 14 final miles to arrive at the landing at the Highway 70 bridge just west of Grantsburg.

When the St. Croix becomes wide more like the Mississippi, paddling changes. This section is called the Marshlands and the current becomes faster and stronger though it may not always appear so. Water levels can affect rapids, taking them from fairly easy riffles and Class I to intermediate Class II. Wind can be a factor on the wide stretches, but also more islands and channels open up.

The highlight of our final day was the Kettle River Slough, a side channel to the west (river right) of the St. Croix where the river splits around an island. It is only recommended when water is high enough to avoid banging over rocks for nearly four miles. That exclusivity makes it attractive, and being narrower than the main channel also recommends it, and as for the frequency of riffles or maybe Class I rapids, it is really about the same. There are a couple of campsites along this less side passage, and it rejoins the main channel where the river comes over an exciting Class II ledge. (The Kettle River also joins just above here from the Minnesota side, and can be a whitewater funland farther upstream with Class II to IV rapids early in the season, something for experienced paddlers.)

Our final moment of beauty along our trip was Sandrock Cliffs. The carved sandstone rising above us was hidden in a sandy-bottomed side channel, open to paddle with adequate water levels (though still accessible on foot when the water is too low, if you care to pull up on the sand and explore). Back on the main river only a mile remained and at the Highway 70 bridge we pulled out at a boat landing on the Wisconsin side, where our second vehicle was parked for our reluctant return to civilization.

Find more information about this riverway on the National Park Service website and discover other National Wild and Scenic Rivers on Rivers.gov.