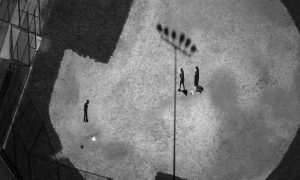 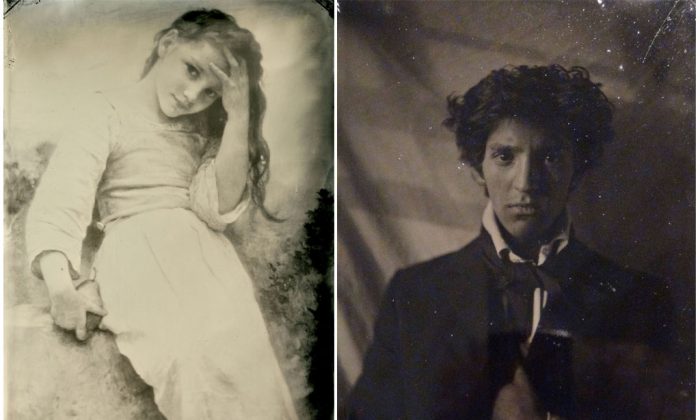 When it comes to fine art reproductions, you have photos of paintings turned into posters, and Giclée prints on canvas with hand-painted brushstrokes for texture. Painter Eric Alexander Santoli and wet-plate photographer Christopher-Calvin Pollard are adding a new (albeit old) medium to the options: tintypes.

The two share a love of the medium and both make the reproductions by hand, a labor-intensive and calculated process. Their gallery in Los Angeles, which shares space with an old bookstore, sells 5 by 7 inch or 8 by 10 inch tintypes of contemporary and old master paintings—so far, all realistic.

The process of creating a tintype is time-and-labor-intensive. The equipment is clunky and the darkroom procedure can be finicky. Santoli and Pollard will be contacting museums to shoot artwork in the galleries as it was done in the Victorian era.

“It’s such an old medium, so it automatically has a relationship to a more representational style,” Santoli said in a phone interview, explaining that in the early days of photography, many photographers were trained as painters first.

“But we’re thinking of expanding to street art and modern works, because it’s more fun to merge [the medium of tintypes] with something different from it,” he said.

Tintypes, also known as ferrotypes, came into popular usage in the mid 1800s. Civil War soldiers and loved ones exchanged tintype portraits before parting. An enameled sheet of thin iron serves as the support for the chemical emulsion that develops the image. Compared to their predecessor, the daguerreotype, tintypes were relativity cheap and quick to make—the original Polaroid, of sorts.

Due to the medium’s history, a tintype lends an old-timey charm to whatever is reproduced, in addition to being a durable, portable miniature of a masterpiece.

“It is actually very high resolution, very sharp. You can infinitely scale it,” Santoli explained. “When you take a tintype, you can get all the detail of the painting. That’s important because paintings can have carefully done features that the artist wants to get across.”

However, any time an image is converted to a different medium, something gets lost in translation. Tintypes are black and white. While values can be incredibly accurate to the original, a tintype can never reproduce the air of a painting seen in person.

“There’s a reason museums still exist,” Santoli said. “When you see a painting, there’s a surface quality—you can see where the paint is raised, though you can get closer to that in a tintype than with other forms of reproduction.”

Santoli has a rare form of colorblindness; one that affects his perception of purples and reds, two colors that find themselves in a broad spectrum of other colors. It has made Santoli appreciate how crucial it is to accurately render dark and light—not only in making objects recognizable, but also composing a pleasing and balanced painting.

Contrast is king when it comes to selecting good tintype candidates, whether by contemporary artists or old masters.

“If you have accurate value, usually the color scheme is secondary,” he said. “It’s also what attracts me to tintypes. It’s almost a comedic thing, being a colorblind painter. Like Beethoven losing his hearing later in life.”