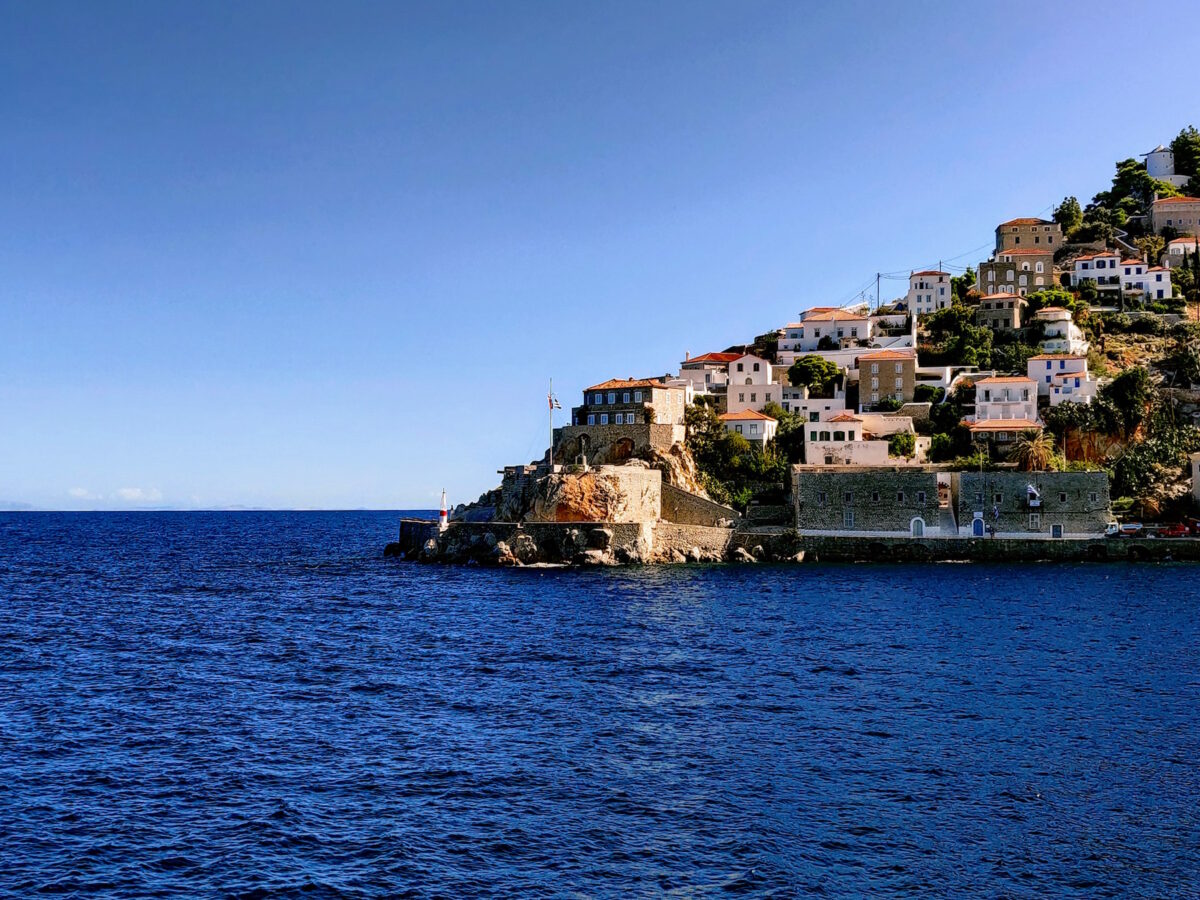 The blue water of the Saronic Gulf near Hydra. (Mauricio Munoz/Unsplash)
Travel

Sailing the Saronic Gulf: Discovering the Other Greek Islands

Gliding into the harbor on blue waters as still as glass, I climbed up to the top deck for a good look at the handsome town. Behind the white sailboats, moored along the waterfront, a boardwalk buzzed with energy. Behind it was a series of two-story buildings—shops on the bottom, apartments on top—baking in the sun.

Mopeds competed with taxis on the narrow streets. Happy families waved as we approached the seawall. Above it all was a shimmering white clock tower backdropped by dark mountains.

Upon tying up the boat to the dock, I disembarked into the bustle. Walking in one direction, I found fresh fruit stands and a fish market featuring the catch of the day brought fresh that morning on the hardworking little boats tied up nearby. The swimmers displayed on a bed of ice were priced in euros and labeled in Greek.

Going inland just a single block, I encountered a back lane lined with small shops selling herbs, olives, and spices. I settled in for a light meal of seafood at a small restaurant with a big patio catering to a local crowd.

While it all looks rather postcard-perfect, chances are you’ve never heard of this island just a short ferry ride from Athens.

Planning their trips to the Greek Isles, most travelers head to just a small handful of destinations. Though Greece is home to 3,000 islands, approximately 225 of them are inhabited. As travel opens following pandemic easing and people take that European vacation they’ve been putting off, the most popular islands in the Cyclades and the Dodecanese will be packed. Though if you stay closer to Athens in the Saronic Gulf, you can meet locals and explore some of the special places the Greeks have kept mostly for themselves.

For example—Poros. Since it’s so close to Athens, some residents from this island commute an hour on fast ferries to the capital, returning at night to sleep in their little slice of paradise. Home to fewer than 4,000 people, the island is separated from the Peloponnese Peninsula by less than 700 feet of water. You won’t find too many souvenir shops, but you’ll feel the heartbeat of a real Greek village. As you walk through town, you’ll see locals filling up grocery bags and picking fresh fish in the markets for the evening’s dinner. If you visit on the weekend, you’ll join many city-dwelling Athenians, here to soak up the sun and get away from the steaming streets, dining at the many little waterside cafes.

Just staying in the Saronic Gulf, you’ll never need to venture far from the capital. Named after the mythical King Saros, the ancients believed this corner of the Aegean Sea to contain six entrances to the Underworld, and it was the site of several epic naval battles. Today, a fleet of ferries from Piraeus, the country’s largest port within Athen’s urban area, steam to a series of small islands, each with its own personality and history.

Some of these boats make milk runs, stopping in several ports, so you can easily hop between them. Spend a day on Aegina, where many of the beaches are wild and secluded, and you can have one all to yourself. Visit the hilltop ruins of the Temple of Aphaia, dedicated to a Greek goddess, which looks like a scaled-down Parthenon, and dates to 500 B.C. Visit the Aegina Archaeological Museum which dates back to 1828. It showcases items from everyday life thousands of years ago, including ceramics, coins, and weapons.

From here, hop to Hydra (also known as Ydra), whose name refers to the fact that natural springs used to bubble up from below the surface, although today the island is very arid. Arriving boats roll into a harbor snugged into the hillside, surrounded by scenic rises on three sides, with homes, churches, and shops climbing the slopes.

Walk the compact town center, arranged around a clock tower that chimes twice an hour, and enjoy streets free of cars, as the whole central business district is pedestrianized. Rent a car and venture out to some of the tiny villages that dot remote corners of the island, some with just ten or fifteen residents. Or just stay in town, where you can take a horse-and-buggy ride, and settle in for a nice lunch by the sea.

Nearby is Spetses, a perfect base if you’re hoping to spend several days. As I arrived by ferry, it became clear that this has long been a place of wealth. For centuries, the island was part of the Venetian Empire and sat along one of its richest shipping routes. The name Spetses is derived from the Italian word for “spices.” The town remains elegant, the five-star Poseidonion Grand Hotel standing prominently, looking like a place where James Bond would be perfectly comfortable.

For a little adventure, I took a tuk-tuk (auto-rickshaw) tour from the hotel. The guide enthusiastically recounted the history of the island as we climbed away from the main town onto small, backcountry roads cutting through forest. Evidence of human settlement on Spetses, which was once connected by an isthmus to the mainland, goes back as far as 10,000 years, and parts still feel primeval.

Eventually, I returned to town. Modern Spetses was shaped by one prominent shipping family, who built the Poseidonion Grand in a style reminiscent of counterparts in Cannes and Nice. The island quickly became a magnet for Greece’s rich and famous, who took treatments in the spa and danced the night away. For me, I was happy to sit outside on the patio, sip a drink, order a small bite of fresh seafood, and watch the sun set into the blue waters of the Saronic Gulf.

Fly: Athens International Airport (ATH), the largest in the country, welcomes major carriers from around the world, including (seasonal) direct, nonstop flights from North American cities including New York, Chicago, Philadelphia, and Washington, D.C. From there, it will take about 45 minutes to reach the port at Piraeus (although, in rush hour traffic, the journey can take up to two hours).

Getting Around: Fast ferries connect the capital with the Saronic Islands in as little as an hour for fares that start as low as 10 euros. Once you’ve reached your island of choice, travel by taxi, foot, or horse-drawn carriage.

Stay: The Poseidonion Grand Hotel opened its doors in 1914, and it continues to offer five-star service and accommodations with an unmistakably glamorous touch. Spend days by the pool and nights in a lovely seaside suite.

Take Note: While those seeking solitude can always find a secluded corner to themselves, these islands get very busy with Athenians seeking summer weekend getaways, so if you’re staying anytime Friday to Sunday, it’s best to book ahead.