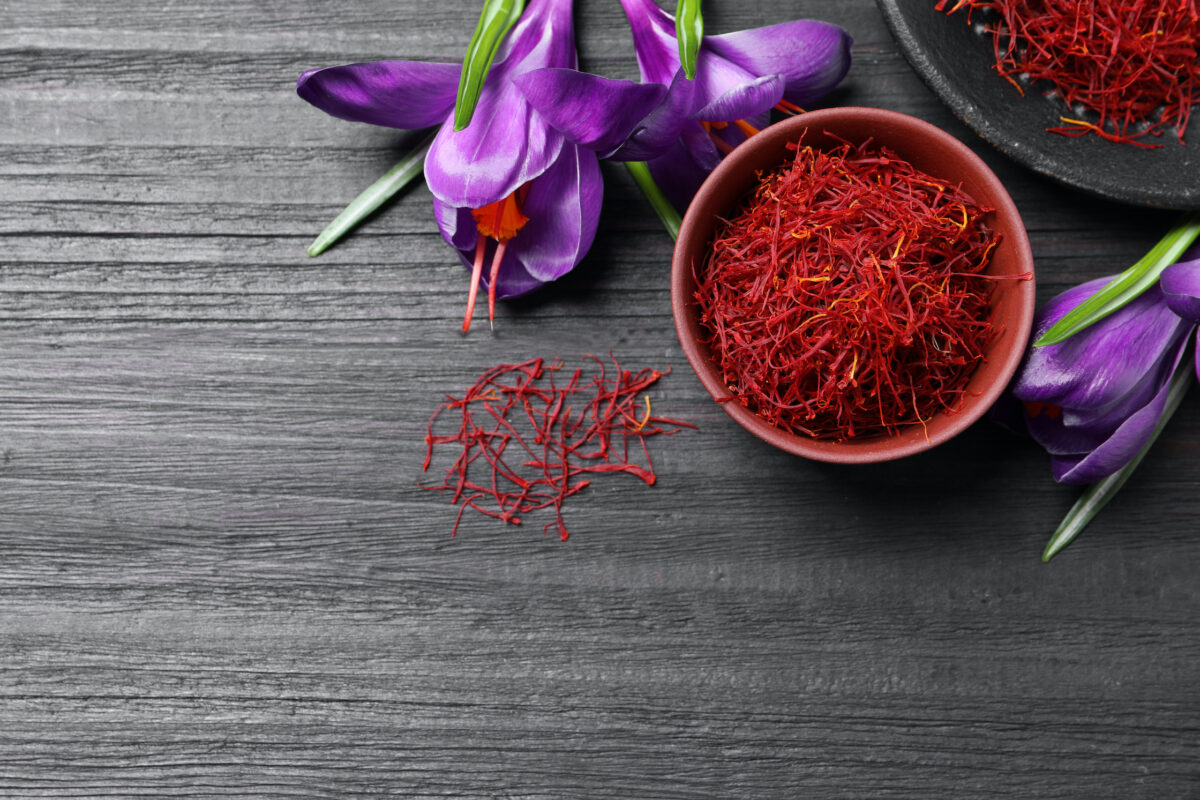 Saffron may cost a fortune, but it also delivers a wealth of science-backed health benefits. (New Africa/Shutterstock)
Nutrition

Age-related macular degeneration is on the rise but this ancient spice may save your sight
BY Margie King TIMEJanuary 1, 2022 PRINT

AMD is the leading cause of vision loss among people 50 and older. It affects more than 10 million people in the United States, according to the American Macular Degeneration Foundation. Fortunately, an ancient spice offers some protection.

The macula is the small spot near the center of the retina. The eye needs it for central vision to see objects straight ahead. When the macula becomes damaged, it severely limits your ability to see things in your central line of vision.

As age-related macular degeneration progresses, a blurred area develops near the center of your vision. In addition, objects may not appear as sharp or bright as they used to. Colors seem faded. That loss of central vision can interfere with daily activities such as recognizing faces, reading, driving, working, cooking, or watching TV.

Besides age, the biggest risk factor for AMD is smoking. Other risk factors include sun exposure, high blood pressure, and obesity.

But we also know that people who exercise and eat green leafy vegetables and fish have a lower risk of developing the disease.

The first AREDS study showed that a combination of vitamin C, vitamin E, beta-carotene, zinc, and copper reduce the risk of late-stage AMD by 25 percent.

AREDS2 found that a combination of lutein and zeaxanthin with vitamin C, vitamin E, zinc, and copper further reduced the risk of late-stage AMD.

Other studies show that rosemary may protect against macular degeneration.

And a study from Australian and Italian researchers shows that the Mediterranean spice saffron helps slow the progression of AMD and improve vision.

In 2010, researchers conducted a randomized, double-blind, placebo-controlled study of 25 people with early-stage AMD. The participants were randomly assigned into a placebo group of a saffron group. The saffron group was supplemented with 20 mg per day of saffron. The study, published in Investigative Ophthalmology & Visual Science, revealed that after 90 days, the researchers saw noteworthy improvement in the saffron group not seen in the placebo group.

In a longitudinal, open-label follow-up study in 2012, the researchers tested a group of 29 patients aged 55 to 85 with early-stage AMD. The patients received 20 mg per day of saffron as a supplement for about 14 months.

The researchers again observed improvements in the participants’ clinical measurements of the disease after saffron supplementation.

What’s in Saffron That Protects the Eyes?

The researchers noted that saffron from the crocus flower contains chemical compounds called crocin and crocetin. These are antioxidant derivatives of carotenoids. Crocin protects photoreceptors from light-induced death. Crocetin increases the availability of oxygen to the cells.

Saffron also contains over 150 volatile and aromatic compounds that contribute to a long list of other health benefits affirmed by scientific study.

A 22-week randomized, double-blind controlled trial published in Psychopharmacology in 2010 showed that 15 mg of saffron twice a day was as effective as donepezil (Aricept) in the management of mild-to-moderate Alzheimer’s disease.

Another 16-week, randomized and placebo-controlled trial showed that 15 mg of saffron twice per day was both safe and effective in treating mild to moderate Alzheimer’s disease.

Saffron as Effective as Prozac for Depression

In a double-blind study published in the journal Progress in Neuropsychopharmacology and Biological Psychiatry, 15 mg twice daily of saffron was just as effective as Prozac in treating depression, and resulted in a 25 percent remission rate. And it’s also been shown to improve sexual problems induced by Prozac use.

Another study published in 2004 found treatment with saffron as effective as the depression drug imipramine (Trafanil) in treating mild to moderate depression.

And a meta-analysis published in the Journal of Integrative Medicine in 2013 found that saffron is effective in treating major depressive disorders.

Other researched-backed health benefits of saffron include:

How to Use Saffron

Saffron comes from the dried dark red or yellow stigmas at the center of the crocus flower (Crocus sativus). Many home cooks shy away from this bright spice because of its cost. In fact, it’s said to be the most expensive spice in the world at $1,500 a pound and up.

That’s because it takes about 15,000 flowers to make just 3.5 ounces of dry saffron threads. Each flower blooms for just one week a year. And all those threads have to be harvested by hand.

Fortunately, you don’t need a lot of saffron to get the benefits of its flavor and color in cooking. Just a pinch—about 20 threads—is all you need for most dishes.

Look for the threads or whole stigmas rather than the powdered form of this spice. The powders may seem like a bargain but they’re often diluted with poor quality or even other less-expensive spices like turmeric.

Steep the threads in hot water or broth for 5 to 20 minutes before adding them to your recipe. This releases the saffron’s essence and aroma.

Add saffron to risotto or other rice dishes. It also goes well in seafood dishes such as bouillabaisse or paella. Or use it in beef stews or tomato sauces.

Once you’ve made an investment in saffron, store it in a container away from sunlight. It should last for years.

For more information on the health benefits of this amazing spice, visit Green Med Info’s page on saffron.