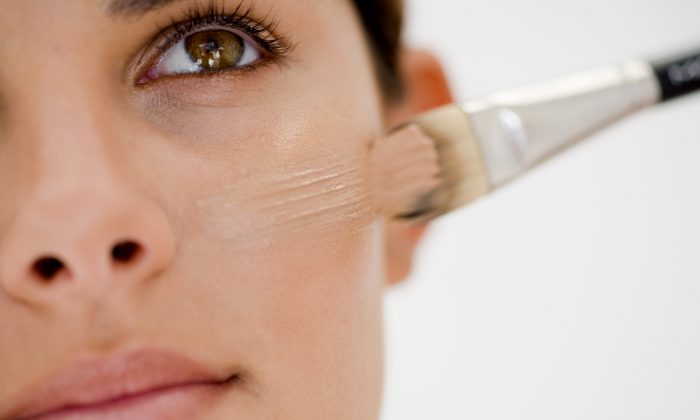 Researchers found that the combination of arsenic and estrogen increased cancer in prostate cells. Both chemicals are found in makeup. (Pixland/photos.com)
Mind & Body

Chemicals in household products approved as “safe” individually can combine to produce a toxic effect that can double cancer risk, researchers say.

Science has already established that arsenic and environmental estrogens are carcinogenic, but studies have tested only a single chemical in a single test and concluded that, on their own, tiny amounts are safe.

Since people are exposed to a cocktail of chemicals on a daily basis, researchers wanted to find out the consequences of combining these compounds.

Over a six-month period, human prostate cells were exposed to what the U.S. Environmental Protection Agency (EPA) considers safe doses of arsenic, estrogen, and a combination of the two.

The results of the research at Texas Tech University showed that mixing arsenic and estrogen together was almost twice as likely to increase prostate cancer risk.

“The findings of this study suggest that co-exposure will have much higher effects (in this case carcinogenic effects) than their individual exposure,” lead researcher Kamaleshwar Singh wrote in an email.

“We usually ignore lower doses of these chemicals’ exposure thinking that it is safe level of exposure,” he wrote.

He said they chose to study these two chemicals in particular because both arsenic and many chemicals that act like estrogen are commonly found in our environment, and both on their own are known carcinogens.

“Previous studies have shown the adverse effects of these two chemicals in a single chemical exposure, that is exposure to one chemical at a time,” he wrote.

Ninety percent of cancers are caused by environmental factors, and only 5 to 10 percent of tumors are due to genetic and hereditary causes, Singh wrote in a statement.

Singh and his team were interested in studying arsenic, a toxin present in cigarette smoke and common in well water in some areas of India, Mexico, and the United States. Although arsenic is banned in pesticides in agriculture in the United States, residues are deposited in soil from copper sulfate fertilizers.

Other sources of arsenic include rice, non-organic chicken, and makeup. According to the Campaign for Safe Cosmetics, some top-brand eyeliners, eye-shadows, mascaras, and foundations can be contaminated with arsenic.

Public Health England and the British Geological Survey recently conducted a study to investigate the presence of arsenic in private water supplies in Cornwall. Over 5 percent of drinking water samples exceeded the safe limit of arsenic.

Synthetic estrogen has also been a target for testing because of its ubiquitous presence.

Xenoestrogens, or foreign estrogens, mimic the effects of natural estrogen in the body, acting as hormone disrupters, and can cause cancerous tumors, birth defects, and other developmental disorders.

Also, industrial chemicals—phthalates—are used in the manufacture of plastics and in fragrances in cleaning products and toiletries. The U.S. Centers for Disease Control and Prevention found in 2002 that more than 70 percent of 72 personal-care products tested contained phthalates and exposure is widespread.

Researchers at Breast Cancer and Environmental Risk Factors in New York believe that exposure to synthetic estrogen may lead to breast cancer in women.