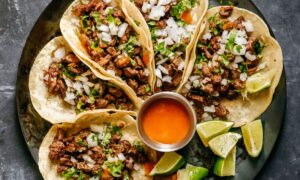 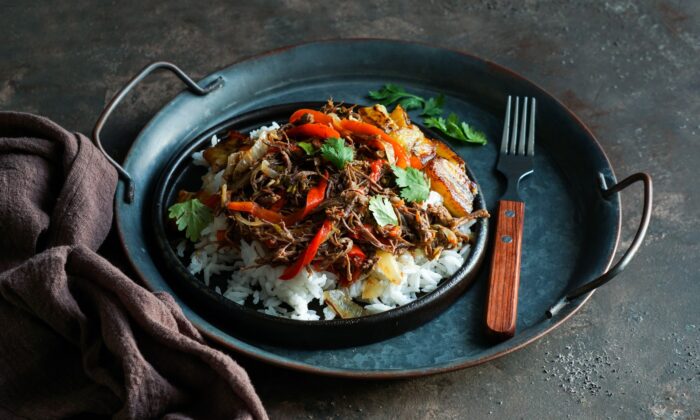 Cuba's version of this Spanish import braises beef in a lush tomato-based sauce until it can be shredded. (Julia-Bogdanova/shutterstock)
Recipes

Ropa Vieja to Save a Roast

Ropa vieja is considered the national dish of Cuba, though its name—meaning “old clothes”—might not exactly hint at just how delicious it is.

The name comes from the tomato-based stew’s shredded meat, which bears some resemblance to the tattered edges of worn fabric. The legend attached to it is of a poor old man struggling to feed his family. He used his threadbare clothes in a desperate stew and prayed over the meal. Then a miracle happened: Old clothes became hearty meat stew.

A couple of weeks ago, a failure with a crockpot had me digging around for my own miracle.

I bought a cheap chunk of meat, top round—not exactly known for its tender qualities. I put it on low heat and, though I gave it several hours, it ended up dried out and tough. It occurred to me that I might save the meat by shredding it up with a fork, then stewing it in something acidic to tenderize it a bit more. Tomatoes, I thought.

Wait, isn’t that the concept of ropa vieja? Where did that idea come from, anyway?

Despite being quintessential to the cuisine of Cuba, ropa vieja doesn’t officially appear in cooking texts there until the 19th century. As I dug deeper, I found a similar dish in the Philippines as well. That led me back to their common colonizer: Spain.

A dish of the same name comes from Spain’s Canary Islands, where the stew originally functioned merely as a catchall for leftovers. It was only later that it became known as a meat stew, one that contained garbanzo beans and potatoes. Potatoes, mind you, were brought back from South America by conquistadores in 1536. But some sources claim ropa vieja—the meat stew, not the leftovers—is over 500 years old, suggesting another point of origin.

Another trail led me to the Iberian Peninsula—Spain and Portugal—and its Sephardic Jewish communities. In Jewish tradition, on the Sabbath, cooking—among other things—was forbidden. One clever workaround was to make a meal the day before. Ropa vieja, a slow-cooked stew that could simmer overnight, fit the bill. This version of ropa vieja also had garbanzo beans, one of the oldest cultivated crops, dating back over seven millennia to the Fertile Crescent.

But it’s a tricky thing, tracking down food and recipe origins. What about the tomatoes in the Cuban recipe? Those came from the Aztecs, with evidence of their cultivation dating at least as far back as the 8th century C.E. These, too, hitched a ride with conquistadores back to Europe in the 16th century. But their acidic character leached lead from people’s pewter plates, making them sick—unless they had wooden plates, like poor people. It wasn’t until Europeans started settling into the conquered lands in earnest that Europeans began eating tomatoes, also in earnest. It’s hard to imagine earnest Italians without tomatoes, but there it is.

So we know that the ropa vieja of 500 years ago wouldn’t have had tomatoes or potatoes. But that was then; this is now. Cuba’s version of the Spanish import picked up tomatoes, but dropped the potatoes and beans, becoming a lush blend of beefy tomato sauce and non-spicy seasonings, along with bell peppers for a touch of sweetness, and olives or even capers.

Ropa vieja recipes typically call for flank steak with its long strands—though chuck roast also works well—set in a tomato-based sauce and left for hours on low heat. As for me, I had already cooked a top round roast without the tomatoes, and likely too hot and too fast. Even the magic of slow cooking had failed me—or I, it—and after several hours, it still came out pretty tough.

Rather than give up on it, I rolled up my sleeves, grabbed a fork, and started shredding. It didn’t fall apart like a better roast might, but it did eventually yield to the tines, and I ended up with a couple of pounds of shredded beef. By further cooking this meat slowly in a seasoned, acidic tomato-based sauce I whipped up to try to save it, the meat became tender and the flavors got deeper into the fibers. The result was fantastic, a total “I meant to do that!” moment.

I phoned my kitchen brags to my mother and she said, “Oh, sounds like something we had growing up on the farm.”

My grandmother served cheap cuts of meat slow-roasted and stewed to tenderize them. My mother recalled a time her mother took bear meat—it was a different time, OK?—marinated it in vinegar overnight, then put it in a pot with crushed and stewed tomatoes over low heat. No one could tell it wasn’t beef, and guests were suitably impressed at the big reveal after the meal.

I am fairly certain my Slovak-speaking miner forebears had never been to the Canary Islands or Cuba. But perhaps grandmother had tasted Swiss steak, which similarly uses tomatoes to tenderize a lesser cut of meat.

Slovak ropa vieja? Obviously, the seasonings differed, and they didn’t have olives. But the concept remained. Grandma served it over mashed potatoes rather than with rice, a substitution I actually tried and liked with my leftovers, and one that lands between the Canary Island version with potatoes and Cuba’s sweeter, tomato-based stew.

Most recipes will have you simmer the large chunk of beef directly with the tomatoes and other ingredients in a pot or Dutch oven before shredding the meat and returning it to the pot, but I am going rogue with this method of starting the meat in a slow cooker.

Pat the roast dry, season with salt and pepper, and use a large cast-iron pan to quickly sear, turning it with tongs to get as much of the surface browned as possible while not spending a lot of time on it. Place the roast in a slow cooker, along with one of the sliced onions, and set the pot on low. Walk away for four hours or longer. Check if it’s tender and remove. Shred with a fork.

Add a tablespoon of oil to a Dutch oven and cook the remaining sliced onions until they start to brown. Then add red pepper slices, cooking until they are soft, and then the garlic and spices, sautéing for a couple of minutes. Add the broth and crushed tomatoes, and simmer for five minutes.

Now add the shredded meat to the pot, bring to a boil, and then reduce to a simmer, covered, for 20 minutes. If the meat is tender to your liking, now add the olives and simmer uncovered to get your desired level of thickness for the tomato sauce. This might take 10 to 20 minutes more. Stir in half the cilantro. Only then should you salt to taste.

Serve with black beans and rice—or mashed potatoes?—sprinkling the remaining cilantro on top. A dash of lime juice and hot sauce is nice for the rice and beans. This dish makes for easy reheatable leftovers.