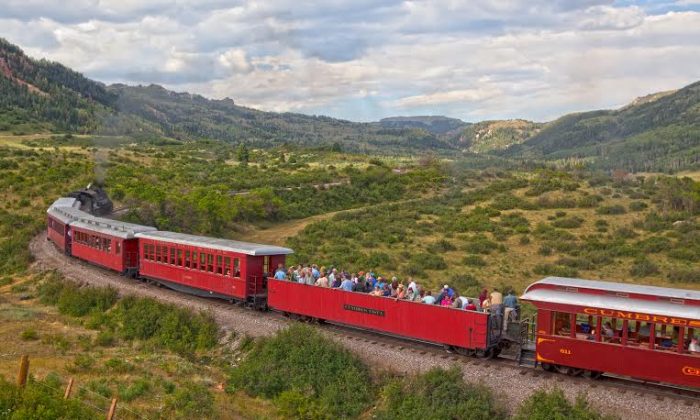 Riding Through the Movies

Hollywood’s studios might be able to show you how a movie was made or what props were used, but it can’t put you in the middle of movie history any better than the Cumbres & Toltec Scenic Railroad can.

With the Oscars just around the corner, planning a trip on this famous railroad will get you into the spirit of the days when making movies was more than just green screens and computer animation. Many movie scenes are set in the Wild West on this railroad that slithers through mountains and crosses over canyons.

The Academy should consider giving the railroad itself a Lifetime Achievement Award for all of its work on the silver screen that dates back to some of Hollywood’s earliest movies. It’s film credits include “Indiana Jones and the Last Crusade,” “The Legend of the Lone Ranger,” “Bite the Bullet,” “Wyatt Earp,” “Butch & Sundance: The Early Days,” “The Good Guys and the Bad Guys,” and the soon-to-be-released “A Million Ways to Die in the West,” directed by and starring Seth MacFarlane.

Americans grew up watching stars like Robert Redford, Paul Newman, and Harrison Ford set out on these daring railroad adventures which had thrills around every turn. Now, people don’t just have to watch, they can experience these places in the flesh.

The railroad’s 2014 season begins Saturday, May 24 and runs through Sunday, October 19. It is the highest narrow-gauge steam railroad in the U.S. In its 64-mile route between Chama and Antonito, the train crosses the New Mexico–Colorado state line 11 times, traversing some of the most beautiful and remote areas in the southern Rocky Mountains, including the 10,015-foot Cumbres Pass and the 800-foot-deep Toltec Gorge, from both of which the railroad takes its name.

“The experience speaks for itself, there’s not very many narrow-gauge railroads left like the Cumbres & Toltec Scenic Railroad so this railroad is truly special,” said Jennifer Weydeveld, media spokeswoman for the railroad.

A journey on the railroad transports you back to a simpler time when a trip was more about the journey than the destination. The railroad is as authentic as it was when it was in its heyday in the late 1800s. Weydeveld said that it’s no wonder that so many Hollywood films have chosen the railroad as a filming location.

“I always tell people ‘Hollywood likes it, so you should too.’ When I take the excursion, I find that I’m able to completely escape from modern life and put everything down and relax. That’s getting harder to do,” said Weydeveld.

The train winds through tunnels and over trestles, and snakes along the Toltec Gorge past waterfalls, mountain forests, and alpine meadows. All trains stop at the historic ghost town of Osier for a hot homemade lunch that includes freshly made desserts, which are said to be delicious. All of the food served on board is sourced locally in northern New Mexico and is entirely homemade.

“I think it’s out of this world and I’m always hearing from people who have traveled on one of our excursions how good the food is. But don’t take they’re words for it, come on board and try it yourself,” said Weydeveld.

The railroad is ideal for all age group and every trip offers some kind of themed entertainment. For the little ones, there’s a Thomas the Tank Engine train.

For couples, there are romantic getaway trains, known as the Cumbres Sunset Train. The journey includes live entertainment and dinner in a charming pavilion at the summit of historic Cumbres Pass.

After watching spectacular sunsets from the train, riders can listen to music while enjoying the cool summer evening at 10,015 feet.

And for the group of moms or girlfriends looking to flee their families for some fun with friends, taking a trip on the railroad will make the stresses of home seem far away when your only responsibility is making sure you’re having fun.

Passengers can also get on and off the train at several points for hiking and biking, and those wishing to bike along the railroad are welcome to bring their bikes on board. If passengers need anything along the way, the knowledgeable and friendly staff is ready to make your journey the best it can be. They can tell you about the history of the railroad or point out some of the sights that pop up along the way.nbelievable sunsets among friends.

Copyright © 2014 by Go Nomad. This article was written by Dan Peltier and originally published at www.gonomad.com