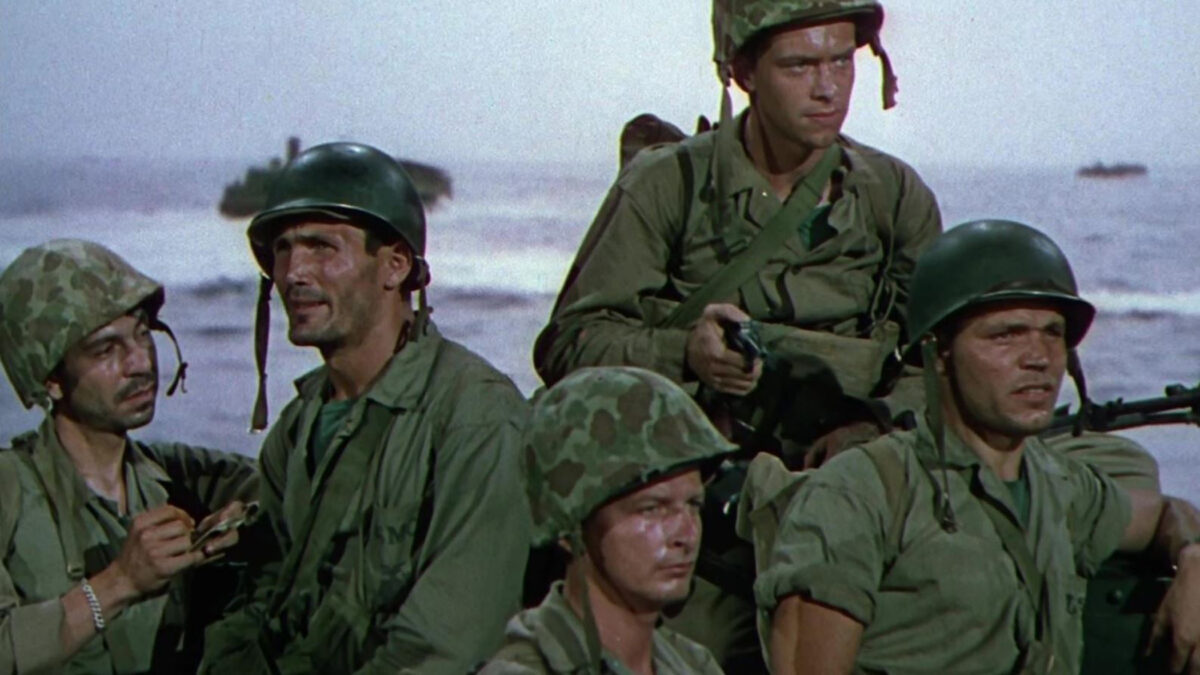 A scene from the “Halls of Montezuma.” (Twentieth Century Fox)
Film & TV

Rewind, Review, and Re-Rate: ‘Halls of Montezuma’: Character-Driven Portrayal of U.S. Marines in the Pacific Theater

“Halls of Montezuma” is an action-packed World War II film about U.S. Marines performing an amphibious assault on a Japanese-controlled island.

This film is presented as more of a character-driven drama—albeit in the form of some war-film archetypes. What could have resulted in a much more stock war film is helped greatly by not only its outstanding director—the great Lewis Milestone, who also directed the 1930 classic “All Quiet on the Western Front”—but also its excellent cast.

The film’s protagonist is U.S. Marine Corps Lt. Anderson (Richard Widmark), who was a high school chemistry teacher in his civilian life. From the outset, we can see that something is clearly off about Anderson as he makes his way around his battalion’s ship: A fine sheen of sweat seems to perpetually coat his forehead, and he has a far-away look in his eyes (greatly affected by Widmark).

Lt. Anderson has led his men through several dangerous missions, including the Guadalcanal campaign and the (oft-ignored in history) Battle of Tarawa. These pitched battles have left him with shell-shock, what we term today as Post Traumatic Stress Disorder (PTSD), and he experiences severe migraines.

Flashbacks show that medical corpsman Doc (Karl Malden) knows about Anderson’s condition but keeps it private. They both know that if their superiors found out about the lieutenant’s issues, they’d probably send him back to the States. Since Anderson is loyal to the men who have survived with him through their previous battles, he wants to finish out the war with them. Doc simply supplies him with pain pills to ease his symptoms.

Before the big landing, Anderson’s immediate superior, commander of the battalion— Lt. Col. Gilfillan (Richard Boone)—addresses the entire top deck full of Marines readying to deploy via loudspeaker. He tells them that instead of killing Japanese military personnel as per usual, they now have new orders—they are to take as many prisoners as they can in order to gain information about Japanese fortifications on the island.

Meanwhile, below deck, a young Cpl. Conroy (Richard Hylton) is cracking up in the medical facilities. He tells Anderson that after the grueling battles they’ve all been through, he is unfit for the upcoming landing. Since Conroy was a student of Anderson’s in civilian life, the chemistry teacher compels the youth to overcome his fear, just as the latter helped the student overcome his stuttering problem in high school.

After the men land on the beach, they meet some initial Japanese resistance, but overcome it and manage to dig in. Soon, the men are tasked to take a strategic ridgeline, and the battalion strikes out across a flat plateau with little in the way of cover. Suddenly, an eerie, high-pitched whining sounds as rockets streak through the air from the ridge.

The Marines begin to take heavy casualties but move forward enough to dig in. From there, the unit’s commanders start strategizing on how to take out the rocket batteries in the Japanese-infested hills, without being obliterated by the surprisingly effective weapons.

Gilfillan orders Anderson to lead his squad to a nearby cave where some Japanese soldiers are thought to be located and are ready to surrender. Capturing the enemy soldiers could give the Marines some valuable intelligence on how to locate and destroy the rocket batteries. But it could also be a trap.

A Personal Look at War

One of the things that impressed me about this film is that it takes its time letting you get to know the various Marines’ personalities and ticks. As mentioned previously, a number of the characters fall under the stock variety: the gun-crazy young upstart and the grizzled veteran who is trying to straighten him out; the perpetual private who gets busted for illegal acts but is rock-solid in battle; the altruistic medic, and so on.

But due to the outstanding writing and convincing performances by the film’s entire cast, this movie is elevated from an average war flick to an enjoyable one with surprising depth.

Moreover, instead of covering the overall Allied war effort, it instead focuses on a smaller unit of particular Marines. This lends the film a much more intimate vibe.

From its opening moments, as the uber-masculine “Halls of Montezuma” song plays during the opening credits, it is obvious that this is a highly patriotic movie. Director Milestone has crafted a solid action drama film here that compels you to care about the individual lives of the men bonding, fighting, and dying in it.