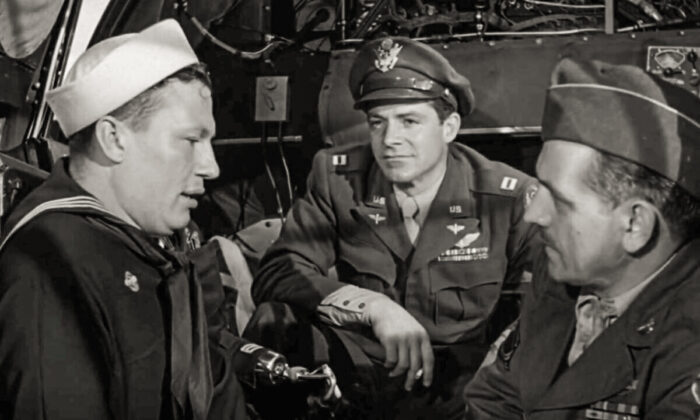 Rewind, Review and Re-Rate: 1946’s ‘The Best Years of Our Lives’: Honoring Veterans

The uneasy yet moving transition to civilian life
By Ian Kane

The Golden Age of Hollywood can rightly claim a wide array of excellent action-oriented World War II films, such as 1945’s “They Were Expendable” and 1957’s “The Bridge on the River Kwai.” Indeed, war movies contributed greatly to making American cinema the most influential and copied style of film production the world over.

However magnificent those films are—indelibly etched into the annals of world-class filmmaking—few from Old Hollywood explore what it was like for World War II veterans to return home after all the action subsided.

Perhaps the most outstanding film on this subject is 1946’s “The Best Years of Our Lives,” directed by William Wyler. Although Wyler did direct 1942’s excellent “Mrs. Miniver,” he was not particularly known for his World War II films. But certainly his wide body of work—outside of wartime action—gave him an edge at portraying the domestic aftermath of the war.

This film, then, is not just about military men returning home from overseas, but also about how they and their families adjust to that ofttimes bumpy transition. On their way back to the fictional Midwest town of Boone City, three men—U.S. Army Air Force Bomber Capt. Fred Derry (Dana Andrews), Army infantryman Sgt. Al Stephenson (Fredric March), and Navy Petty Officer Homer Parrish (Harold Russell) —meet. The trio come from vastly different backgrounds, and the film follows each as they attempt to reintegrate back into civilian life.

The opening scenes are incredibly touching as the three men catch a flight, then a taxi together, to be dropped off at their respective homes.

Homer is the first to be dropped off at home, and since he’s lost his hands in a ship’s fire, he wears prostheses with hooks at the ends. Although his family comes out to greet him lovingly, he tenses up, thinking that everyone merely pities him.

Al is dropped off next at his luxury lodgings, and his wife Milly (Myrna Loy), daughter Peggy (Teresa Wright), and young son have a smoother reunion—at least at first.

And finally, Fred arrives at his parents’ home to find that his wife, Marie (Virginia Mayo), has moved out. The newlyweds had lived with his parents when he left. She hasn’t been in contact lately, although they know she’s become a showgirl.

Later that day, all three men end up at a local bar. Fred is stressed because he can’t locate his wife, Al wants a night on the town with his wife and daughter, and Homer wants to get away from his family whom he believes see him differently because of his disability.

When Fred and Al get drunk, Milly and Peggy transport the two to the Stephenson home for them to recover, and it is then that we see the first signs of serious trouble: In his sleep, Fred howls and screams about a wartime buddy dying. In a lovely scene, Peggy protectively calms him down and wipes sweat from his face.

The next morning, as Peggy fixes Fred breakfast, it’s clear that they are attracted to one another. Al awakens later and is so hungover that he ends up showering in his pajamas. Milly, although sensing that drinking has become an issue for Al, supports him as seamlessly as she can in order to facilitate his return to civilian life.

Al reclaims his bank job and even gets promoted to VP of loans. Although he seems to adjust well, his normally sound judgment seems off to his superiors, such as when he offers a no-collateral loan to a fellow veteran.

Meanwhile, Fred becomes increasingly frustrated because his wartime heroics don’t count for much in the job sector. After looking all over town, he ends up with his humble pre-war job as a soda jerk. His wannabe jet-set wife, Marie, is indifferent to his shell-shock (PTSD) nightmares and isn’t happy with his job prospects.

And finally, Homer seems to be slipping farther and farther away from both his family and doting fiancée (Cathy O’Donnell). Although they’re thrilled to have him home, Homer can’t adjust to his handicap.

By the midpoint of this nearly three-hour movie, I was thoroughly enthralled and immersed in these men’s lives, and couldn’t wait to see what happened next. It was also nice to see the nurturing women (other than Fred’s wife) caring for their mates—sticking by them through challenging times instead of cutting and running, which seems all too common nowadays.

Another impressive aspect is how effortless and believable the acting is. Whether it be the way Fred and Peggy stare at each other like forbidden fruits, or Al and Milly’s reaffirmation of their vows, everything is top-notch. Fortunately, “The Best Years of Our Lives” was deservedly appreciated, achieving Oscars for Best Picture, Best Director, Best Actor for March, and Best Supporting Actor for Russell, who by the way was a real-life double amputee whose hands had been blown off in a Navy accident.