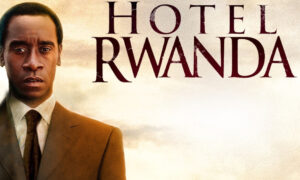 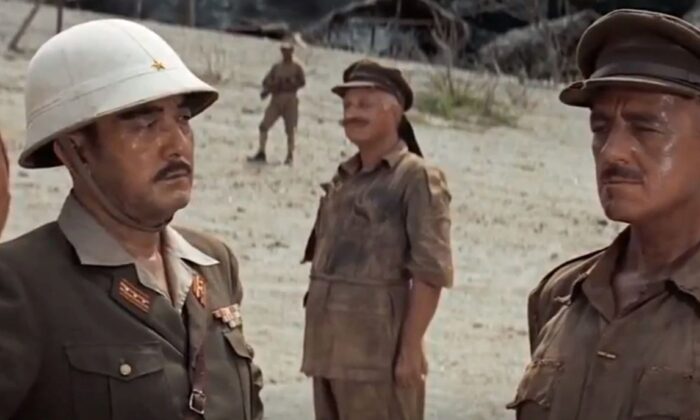 Sessue Hayakawa (L) and Alec Guinness, as colonels in opposition, in “The Bridge on the River Kwai.” (Columbia Pictures)
Film Reviews

Rewind, Review, and Re-Rate: ‘The Bridge on the River Kwai’: A Masterpiece That Only Gets Better With Time

I’ve watched my share of war movies over the years and many of them fit into two categories. While some show the evil and destruction that men can visit upon one another (as in Oliver Stone’s “Platoon”), others contain a stern antiwar message (such as in Mel Gibson’s “Hacksaw Ridge”). Despite these differences, most of these films usually play things straight on the nose, without too much subtlety.

Adapted from French author Pierre Boulle’s 1952 novel, “Le Pont de la Rivière Kwai” (“The Bridge on the River Kwai”), a 1957 film adaptation of the same name is quite another story. Known for going over budget and falling behind schedule, legendary English director David Lean (“Lawrence of Arabia,” “Doctor Zhivago”) was perfect for helming this project. His lengthy, nearly three-hour production allowed for a nuanced showcasing of not only some of the ironies of war but also the gradual, creeping madness that can be caused by it.

The year is 1943, and a large detachment of British soldiers under the command of Col. Nicholson (Alec Guinness) has just arrived at a Japanese prison camp in Burma, where they will be subject to hard labor.

The commander of “Camp 16” is Japanese Col. Saito (Sessue Hayakawa), who wants the POWs to build a bridge nearby, which will connect a train line from Burma to Thailand. It must be completed on a tight schedule. The prisoners are allowed to rest on the first night of their arrival but will be marched off to work the following day.

That evening, Nicholson meets Cmdr. Shears (William Holden), a US Navy officer who has already been at the prison camp for some time. Shears tells Nicholson of the camp’s brutal conditions, and how it’s inescapable. Nicholson dismisses the Navy man’s concerns and states that Saito seems like a reasonable man.

But right away, the iron wills of the colonels of two opposing forces come into conflict. While Saito wants all of the POWs—officers included—to lend a hand in building the bridge, Nicholson points out that the Geneva Convention expressly excludes officers from performing manual labor while in captivity. After a brief standoff, Saito has Nicholson beaten and then thrown into “the oven,” a small metal box exposed to the tropical sun. The officers under Nicholson’s command are likewise tossed into a similarly cramped container.

Shears escapes the camp but is wounded. Near death, he stumbles upon a Burmese village where the locals nurse him back to health. The kind villagers give the American a boat, and he struggles to get off the island. Unfortunately, he gets lost at sea, but a seaplane spots and rescues him. He is taken to a British military base in Sri Lanka.

As Nicholson languishes in the brutal box for many days, his enlisted men work away on the bridge. At least that’s what the Japanese think they’re doing. Instead, the British POWs move very slowly and sabotage the construction of the bridge at every turn.

As the bridge’s construction deadline approaches and Saito realizes that not much work is being accomplished and comes up with a plan to save face and appease the British officers. With this small victory or perhaps due to the torture, cracks in Nicholson’s stern façade begin to appear, albeit subtly. He expresses his abject shock and dismay at the shoddy job his men are doing on the bridge and tells his officers that he wants to show the Japanese what fine craftsmen the British are.

For him, successfully building the bridge would represent a symbolic victory over the Japanese captors, even though his chief medical officer, Maj. Clipton (James Donald), warns him that completing the bridge could be construed as aiding the enemy.

Meanwhile, back in Sri Lanka, British intelligence wants Shears to help them blow up the bridge that he has told them about during his debriefing.

This sets up two main thrusts of the film—one side wanting to complete the bridge (Nicholson), while the other is on a mission to destroy it (Shears). The dramatic collision of these two opposing forces during the film’s final act is nothing that I expected.

Simply put, this film is a true tour de force of filmmaking. Instead of physical violence, most of the action takes place in the psyches of the men. And, because of Lean’s brilliant direction, the phenomenal cast (mainly Guinness and Holden), and quite a bit of wry humor and irony thrown in for good measure, “The Bridge on the River Kwai” is considered to be one of the greatest films ever made.

CORRECTION: An earlier version of this article misstated the geography of the land where the Japanese prison camp is located. The prison camp is actually surrounded by land. The Epoch Times regrets the error.