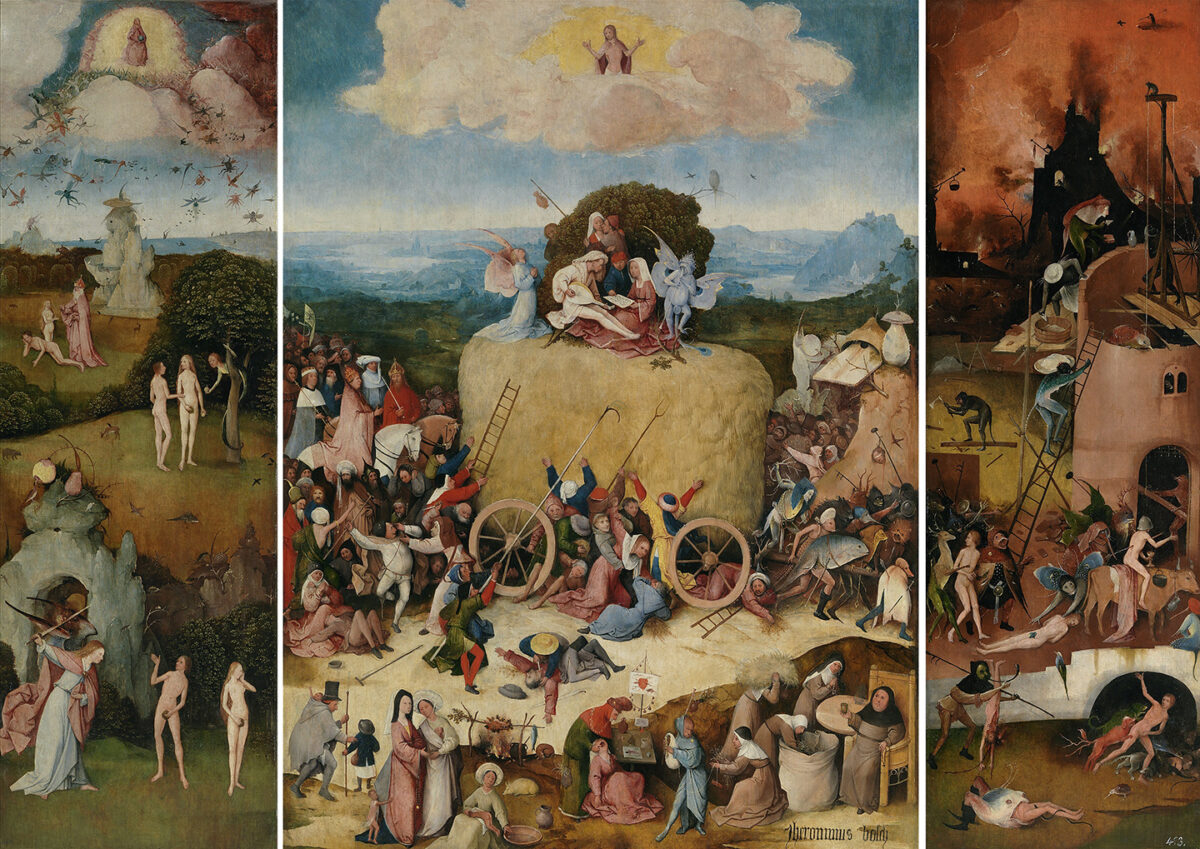 The third spiritual question is “How can I be saved?” “The Hay Wagon Triptich,” 1510–1516, Hieronymus Bosch or workshop. Oil on panel; 57.9 inches by 83.4 inches. Prado Museum. (Public Domain)
Traditional Culture

What is the last question that every thinking person needs to address if they are to live a full and fulfilling life?

So far, we first considered where our culture stands today on spiritual matters. Then, we considered some questions: In the second article, we looked at why existence exists; then in the third article, we discussed a more personal question—What is the purpose of my life?

We may notice that the first question asks a “why” question and the second asks a “what” question; unsurprisingly, perhaps, the third and final vital question is a “how” question. Indeed, this question is often the first for many people because it is so very personal—more so than the rather impersonal and philosophical question of why existence exists, and even the generic personal meaning-of-life inquiry.

What is this question, then? First, I must put in a disclaimer: The language I am about to use to describe this question is framed in seemingly Christian terms, but this is because the Christian faith has so impacted Western culture. What I am drawing together here is the observation that all religions in the world seek to provide an answer to this question; in fact, all religions not only seek but also exist to provide an answer to this question. If they did not, it is scarcely conceivable that they could or would survive for as long as they have.

A Question of ‘How’

Most directly, the question is expressed in this way: How can I be saved? Since the dawn of human time, we’ve had a feeling, a notion, a profound horror that the world is not what it should be, that human life is not what it could be, that in some way we have fallen from the ideal and perfect world we should be in, into a mess—COVID, the Ukraine, fractious politics, and much else besides—that we experience now but which every age eventually experiences.

The gods may live in some perfect Olympian world, but not we humans. One common property of mythologies around the world is that they contain some version of the idea of a Golden Age that soon fell away to a Silver, to a Bronze, and last of all to the most wicked age of all, the Iron Age, where we are now. According to Hindu scriptures, the ages are cyclical but there are four of them and these correspond to the Greek view. And even the Bible talks of the degeneration of empires in this fourfold way (Nebuchadnezzar’s dream in Daniel chapter 2, for example).

The question of “how can I be saved” cuts to the root of what it means to be a human, for it implies in its very formulation that human beings cannot save themselves. There is no infinite progress through which we are destined to conquer disease, death, or even our own human natures. Some, such as Elon Musk and those in Silicon Valley, seem to think they can (in what they view as “transhumanism”).

Yet the brilliant atheist philosopher John Gray expressed it this way in his book “Heresies”:

“We inherit from Greek philosophy the belief that knowledge is liberating, but the biblical myth of the Fall is closer to the truth.”

In other words, the heuristic or explanatory power of myths of the Fall—be they the Garden of Eden, most famously, or the various forms of the Ages of Man—are far more compelling in accounting for why the world is as it is. Knowledge, learning, education, and such things are not going to save the world or even the individual.

Religions, on the other hand, force individuals to go inside themselves and confront themselves. And those who sincerely do this find themselves wanting.

This is, essentially, the human condition; and in secular, materialistic, and atheistic terms, it is hopeless. Thinker Thomas Hobbes’s said that life is “solitary, poor, nasty, brutish, and short.” If we accept that statement, then all secular remedies for that fact are unconvincing for the vast majority of people. But we must remember that around the world, the majority have religious beliefs, and these people experience profound psychological and physiological benefits. For example, sociology professor Phil Zuckerman, citing the 2003 World Health Organization, stated: “Concerning suicide rates … it is interesting to note … that of the top remaining nine nations [excluding Sri Lanka] leading the world in male suicide rates, all are former Soviet/Communist nations, such as Belarus, Ukraine, and Latvia. Of the bottom ten nations with the lowest male suicide rates, all are highly religious nations with statistically insignificant levels of organic atheism.”

In “Our Culture, What’s Left of It,” English cultural critic Theodore Dalrymple writes: ‘The loss of the religious understanding of the human condition—that man is a fallen creature for whom virtue is necessary but never fully attainable—is a loss, not a gain, in true sophistication.” And this loss of understanding will lead more and more people to the calamity of the loss of their own souls; it’s surely the most calamitous thing that could happen to anybody, ever.

Humankind all recognizes this possibility, and always has: Our Faustian stories, pacts with the devil or demons, resonate across all ages and all places across the globe. But more than Faustian pacts, we see and meet people—sometimes in our own families and among our friends—whom we realize, tragically, are “lost.” They have taken a wrong road, and it seems as if they cannot recover or get back to a right path. Dante expressed this most powerfully in the opening stanza of his famous “Divine Comedy,” where he talked of “our life’s journey” and being lost in “a dark wood.”

The Most Important Question

Then if this is the case, which I sincerely believe it is, the question “How can I be saved?” is critically important for all of us. In Buddhist terms, we need to be able to go from samsara, which is a cycle of aimless drifting, wandering, or mundane existence, to nirvana, generally understood as perfect quietude, freedom, and highest happiness. This doesn’t happen automatically at death. Similarly, for every religion, including those that no longer exist (like the ancient Egyptian religion or the Norse beliefs about Odin and Valhalla), there is the question of how we are to be saved and avoid hell. More positively framed, it is: How do we get to the Isles of the Blessed?

In a funny sort of way, this question, expressed as a positive, actually captures where we currently are in Western culture, because billion-dollar industries supply endless answers to a slightly different question: How can I be happy in this life?

And everyone wants to know how! A fascinating survey of all this activity is contained in social critic William Davies’s 2016 book, “The Happiness Industry.” Its title says it all: Seizing on people’s desire to be blessed, also known as “happy,” is an industry. What we get is a sort of do-it-yourself mishmash of ideas. As Davies puts it: “The psychology of motivation blends into the physiology of health, drawing occasionally on insights from sports coaches and nutritionists, to which is added a cocktail of neuroscientific rumours and Buddhist meditation practices.”

This takes us full circle to our first article in this series, where I noted that attempting to answer the question only in this life—avoiding spiritual and existential questions—was the very cause of our suffering. Ironically, then, as we move to avoid suffering, it increases!

The theologian Henri Nouwen in his book “The Wounded Healer” correctly observed: “Who can take away suffering without entering it?”

The question of how we can be saved, then, can only be answered by “entering it.” Suffering seems to be the opposite of the happy, successful lives we all really want. Yet “without more conscious suffering, we can never find depth or meaning, never really grow, and never really change our lives,” American psychoanalyst James Hollis said in “Finding Meaning in the Second Half of Life.”

To accept suffering, of course, to believe in something that seems madness, goes against the grain of all that our current culture stands for. Yet when we reflect on the ancient traditions and the wisdom to be found in all major world religions—whether taking up the cross and following Jesus, following the eightfold path of Buddhism, embracing the discipline of Mosaic Law, and the rest besides—we find that self-discipline, the curtailment of our appetites, and the sacrifice of self for others is at the root of what they all teach. And through that teaching and faith in it (be “it” the founder, the writings, the practice), we do indeed become “saved” people.

However, my coda must be that, while I am not saying that all religions are the same or equal or that all roads lead to Rome, I am saying that to be saved we have to wrestle with the suffering in life, we each have to exercise our heart and mind to examine what is true, and having done so, we have to believe, commit, and act accordingly.

To be “saved” is to go on the road less traveled.

Part 1, “Reviewing 2021 in the Month of Janus: Abandoning Purpose in Life for Our Feelings,” looks at how we tend to focus on our physical and emotional states rather than our spiritual one. Part 2, “The Importance of the Question: Why Do We Exist?” discusses that if we truly ponder this question, we realize that creation itself is self-evidently good. Part 3, looks at the question of our lives’ purpose.