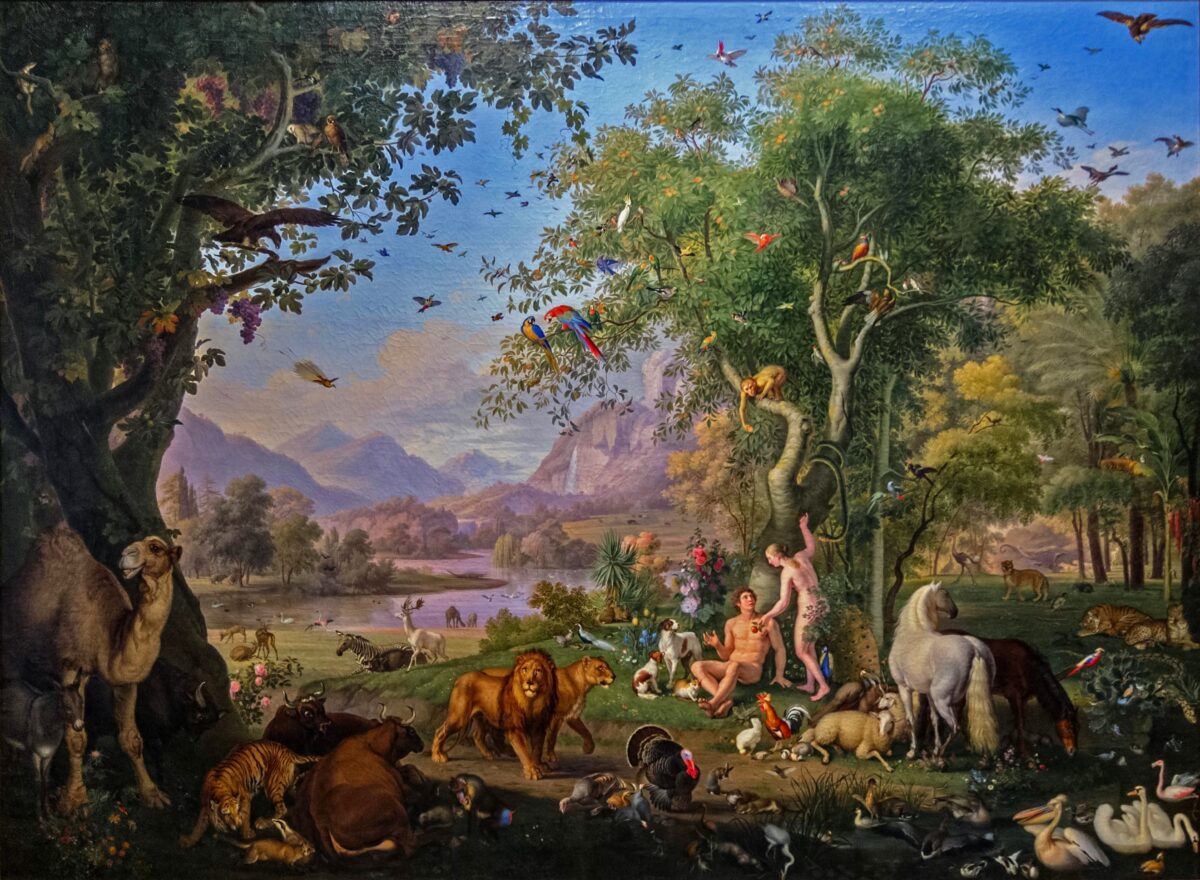 Can the answer to why creation exists be simply because it is good? “Adam and Eve in the Garden of Eden, between 1800 and 1829, by Peter Wenzel. (Public Domain)
Arts & Tradition

Reviewing 2021, Part 2: The Importance of the Question: Why Do We Exist?

Instead of focusing on our exercise or diet to increase our well-being, important as these are, what if we were to start at the top end and focus on our spiritual well-being. What would that look like?

In part 1 of this article, we considered how so-called business posts on LinkedIn in 2021 had become much more personal in nature, specifically relating to mental health problems, and how instead of people working at the top end of their nature—that is, the spiritual—often they were seeking to solve their issues at the lower end, which is the physical. The four levels of human nature are physical–doing (body), emotional–feeling (emotions), mental–thinking (mind), and spiritual–knowing/being (spirit).

There are three key questions that the spiritually minded person is always attempting to address. And to be clear, to answer these questions, or attempt to answer, may well lead one to a specific religion that one embraces and believes, but the generic spiritual questions remain in the background whether one is conscious of them or not.

But what are these questions that stand as a backdrop to the spiritual experience itself? First, spiritual people ask themselves this: Why does existence exist? And, of course, as soon as we ask this question, we immediately realize that most people do not want to ask this question. It seems impossible to answer; indeed, from a logical perspective, it is impossible to answer.

The most presumptuous of people—scientists—love to pretend they have an answer to this question. They sometimes love to push back to a millionth of a second (or less!) after the Big Bang and suggest what was happening then. (Apparently, it was very hot!) But that kind of reasoning never gets to the point of why the Big Bang occurred at all.

This kind of overreach by most scientists is well described by professor Brian Josephson, a Nobel Prize-winning physicist, as quoted in Jeffrey Iverson’s “In Search of the Dead”: “When a scientist says we understand how the brain works, or how a man came into existence through natural selection, these are enormous extrapolations.” Yes, enormous! How much more enormous, then, when they purport to explain existence.

We come, inevitably, to the mystery. What in our modern, scientific lives we like the least are the inexplicable, the ambiguous, the wonderful. And the only way we can approach the mystery of existence … is through poetry and myth. The connection between the two is clear, for as American philosopher Allan Bloom commented, “Myths are made by poets.” He went on to say, “Men and societies need myths, not science, by which to live.”

What an incredible statement: We need myths, not science. We have become so dependent on science (and its kin, technology) and bewitched, too, that we almost fail to see how enervating it really is. A good example is the current COVID crisis in which all our rights and freedoms are somehow waived because scientists crunch data and then inform us, and governments tell us what we can and cannot do.

Filipino poet and literary critic José Garcia Villa, as quoted in “Poetry Is,” observed that “Poetry exists in abstract time. It transfigures itself into a continuous and perpetual present—with a mythic live time that is universal, live time so that it is true at all times. It is what the Greeks call ‘kairos’—inner human time.”

Poetry and myth, therefore, speak for all time because they speak directly to the soul through images. When we ask, then, why does existence exist, only poetry and myth can provide an answer that satisfies us. Indeed, the deepest appeal comes from the most imaginative responses to the question.

In one early Egyptian myth, nothing existed but the deep, dark waters of Nun on which floated a perfect egg that, inexplicably, cracked open revealing Atum, who had created himself, and henceforth shone as the sun to light his newborn world. Notice here how the myth almost breaks down under its own contradictions: The word “inexplicably” tells us that we can’t know. Yet, Atum created himself, so some divine will brings itself into existence.

In Greek mythology, according to Hesiod, there were initially four entities: Chaos, Gaia (Earth), Tartaros (the underworld), and Eros (sexual love). These were the primal forces whose procreations led to everything that has been made, including the gods and humans.

We see in these wonderful myths how the poetic imagination posits something much simpler at the beginning, but from which a superabundance occurs–a full creation, as it were. In the West, the greatest of all these myths occurs in the first three chapters of Genesis. And here we get something very special and very nonlogical.

We learn that creation is “good” and “very good.” When we ask why it exists, an answer that the poetic imagination has summoned in the Genesis story is that it exists because it is good, very good. In other words, there is a massive moral, as well as architectural, dimension to existence.

The “making” (or architecture) in itself was good, very good—and, by the way, the Latin word for poetry or poet is “maker.” From this, of course, we see the parallel with the word “universe,” meaning one song or one poem or verse. And not only that, but goodness informed it, too—a goodness that we know was subsequently compromised.

Asking why existence exists is like asking artists or poets why they created a particular work. The poet might answer this or that, but the real answer comes from reading the poem. The great critic and poet Charles Williams, who was an Inkling (a member of a literary group associated with C.S. Lewis and J.R.R. Tolkien), expressed it this way: “Poetry is a thing sui generis. It explains itself by existing.”

Just as we rejoice, therefore, in reading a great poem, so the natural response to reading what we might call the book of existence is also one of joy because it’s good—it’s very good. And “good” here is not some subjective “good”; it’s much more profound than that precisely because of its ultimate importance.

In her article appearing in the book “Writing Cures,” counseling educator Jeannie K. Wright correctly observed that “Poetry or story making is therapy for both the body and soul.” If that is true in merely contemplating or writing poetry, how much truer must it be to contemplate the poem that is the universe or existence itself?

As a starting point for consideration of one’s own being and existence, then, we might consider the existence of the universe, and as we attempt to “read” it, realize what a wondrous, absorbing, and mystical text it is.

If we needed proof of that, it would not be in science or in data or in anything else as tedious. It would be in the commonplace and universal experience of virtually all human beings who get restored by nature: by walking in the woods, by being near the sea, by viewing scenes from mountaintops, by observing the beauty of all natural phenomena—the sunrises and sunsets, canyons, waterfalls, icebergs, the lakes, the forests, or the incredible complexity and ingenuity of living creatures, be they lions or eagles, or dolphins and sharks, or spiders and scorpions, by the sight of stars at night, the planets and moon and so on.

When the world, as Wordsworth the poet put it, “is too much with us”—the dreary industrial landscapes, gray offices, and systematized and processed lifestyles—we find an outlet in nature.

And what is nature? It is a word we use for existence and life at its most uncontaminated by human inventions. In short, the real existence around us refreshes and inspires us, if we let it and if we seek it. Why? Because it is good, very good.

If we think about where this article started, in trying to approach our well-being not from a physical perspective, which is limited in terms of meaning and of the bigger picture, then this spiritual journey is much more likely to invigorate and sustain us. In thinking about why existence exists, we tap into the good, the very good, and this becomes a self-evident reason to live and live well.

However, there are two more spiritual questions that we need to consider, and we will be covering these in the next article in this series.

Part 1, “Reviewing 2021 in the Month of Janus: Abandoning Purpose in Life for Our Feelings,” looked at how we tend to look at our physical and emotional states rather than our spiritual one.