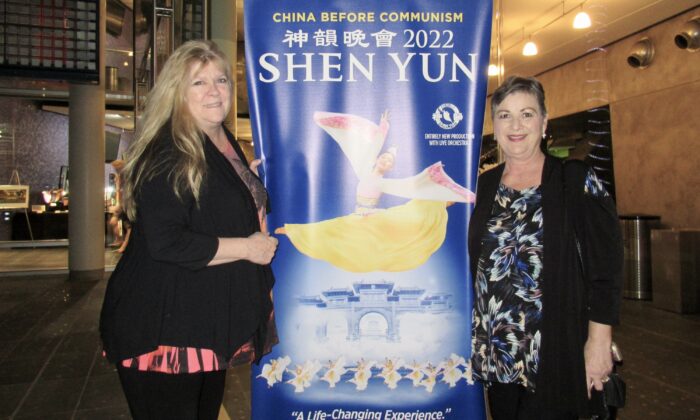 MESA, Ariz.—Loneliness is a feeling that really has nothing to do with whether one is physically alone. Shen Yun Performing Arts reminds audiences that their spirits are always connected.

Both Ms. MacKinnon and Lou Ann Loveday are retired dental hygienists from Calgary, Canada, who are in the United States for vacation.

“We both live in Canada and we’ve seen Shen Yun advertised since 2006, and so then we finally decided to do it here at this theater. And we’re amazed at the level of quality and expertise in the show,” Ms. MacKinnon said.

Shen Yun is based in New York and its dancers are trained in classical Chinese dance. It is a dance form with thousands of years of history and deep influences in other arts like martial arts, gymnastics, and acrobatics.

“The costumes, the color, and the pose of the dancers was absolutely fabulous, and they were very talented. The talent is just exceptional and I am going to recommend it to all my friends when it comes to Canada,” Ms. Loveday said.

Through dance and music, the company tells tales of ancient China. The bearing and form in classical Chinese dance allow dancers to express a large range of emotions, perfect for storytelling.

China has a history of 5000 years. The five millennia has something for everyone and everyone has something they can relate to, no matter what nationality they are.

“The message was so good. It was inspiring to see the history and how they told the story. It was amazing,” Ms. Loveday said.

“Yes, to see the artistry mixed with the history, the Chinese history, was inspiring because you felt like you were in their land. You didn’t feel like you were separate. And they really did want to make you feel that you could understand it. So it was good,” Ms. MacKinnon added.

The emcees share that Shen Yun’s name means ‘the beauty of divine beings dancing,’ during the performance.

“And we certainly saw that in the show. And we’ll remember it for years to come,” Ms. Loveday said.