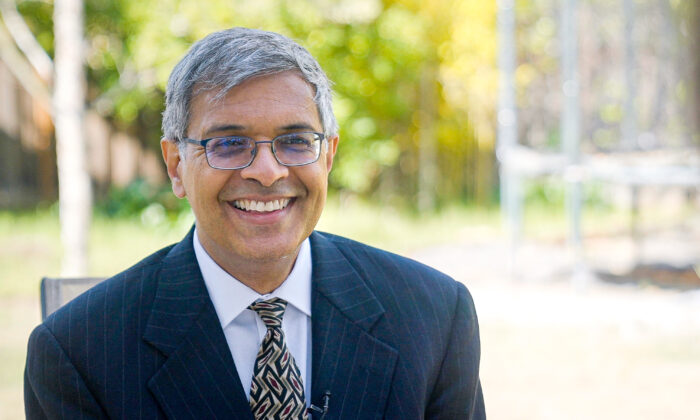 Dr. Jay Bhattacharya, a Professor of Medicine at Stanford University, at his home in California on April 17, 2021. (Tal Atzmon/The Epoch Times)
Editor's Picks

Trust in science has been severely impacted by the actions taken by health officials and scientists in response to the COVID-19 pandemic.

“Public trust has been shattered,” Dr. Jay Bhattacharya, a professor at the Stanford School of Medicine and a senior scholar the Brownstone Institute, said during an institute conference on Nov. 13.

That matters because science not only relies on public funding, but also public trust, or “people believing and using the products of science,” Bhattacharya said.

Officials across the United States, acting on recommendations from some public health experts, imposed lockdowns in spring 2020 in response to the pandemic. Schools were ordered to close. Businesses deemed nonessential were forced to shut down. And tens of millions of Americans spent most of their time inside their homes in a bid to slow the spread of the virus that causes COVID-19.

Studies have since indicated that the shutdowns were ineffective and that they led to numerous problems, including delayed medical care, a setback in educational achievement, and a rise in mental health problems. For instance, a Centers for Disease Control and Prevention (CDC) study in August 2020 found that 25 percent of young American adults considered suicide over the previous month, with adults reporting “considerably elevated adverse mental health conditions.”

Speakers at the conference said officials didn’t properly assess the risks of lockdowns and seemed to ignore basic science about the CCP (Chinese Communist Party) virus, which causes COVID-19.

Martin Kulldorff, the institute’s senior scientific director, recalled getting a list of those who died in Wuhan, China, shortly after the virus started spreading there. Most of the deaths were among the elderly.

“Since there were so many old people dying and very few younger people dying, it was clear that this was a disease that affected the old, but not the young,” he said at the conference. “So my children were safe, and I figured, ‘OK, they can live a normal life. We have to protect all the people so that they don’t get this disease. But kids, young adults can live a normal life.'”

The lockdowns left him stunned, especially the school closures.

Existing public health institutions, including the CDC, haven’t done a good job during the pandemic, and have been a major source of misinformation, speakers said. They noted Dr. Robert Redfield, the agency’s director under the Trump administration, who falsely claimed that masks were more effective than vaccines, and that Dr. Rochelle Walensky, the agency’s current director, recently claimed that masks can help reduce the chance of COVID-19 infection by 80 percent.

The group started the Brownstone Institute as part of what they saw as a need to repair public trust in science. The institute describes itself as a nonprofit that sees the policy response to the pandemic as “a failed experiment in full social and economic control in most nations” and desires to “come to terms with what happened, understand why, discover and explain alternative paths, and prevent such events from happening again.”