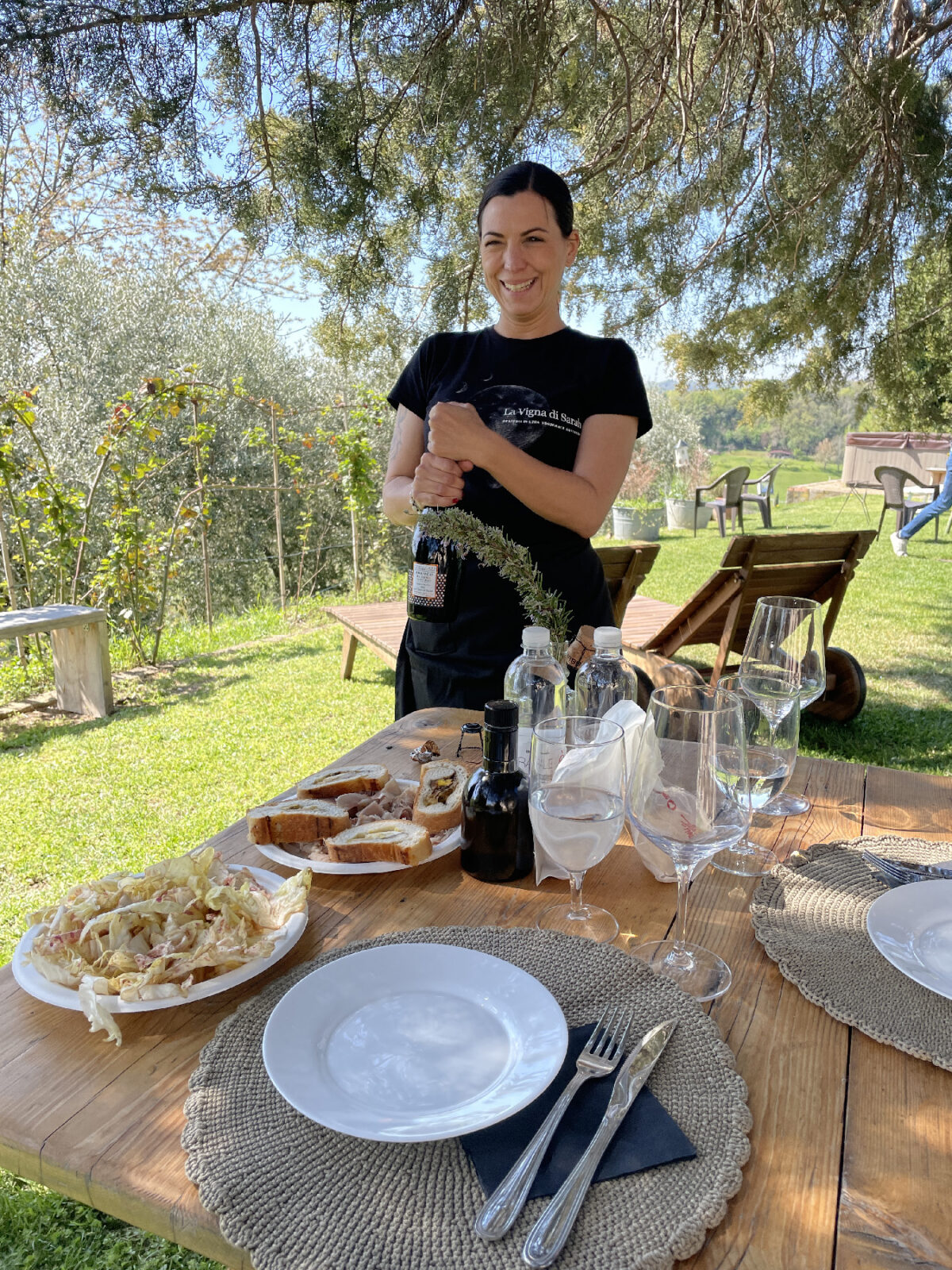 Prosecco Tasting on an Escape From Venice

After a whirlwind tour of Italy’s most famous cities and sites, my husband and I were ready to have a quiet day away from the bustle of tourists and crowds. So it was that our first day in Venice was spent driving north out of the city with tour guide Riccardo Rossano toward the Dolomites.

“I will tell you all you want to know, but I don’t want to bore you,” Rossano offered on our drive to La Vigna di Sarah.

His information, however, was anything but boring. In one hour, he covered the history of the area and its importance as a UNESCO World Heritage Site. He pointed out the Dolomites and respectfully talked about the soldiers who had died there during World War I. He said that tiramisu was officially invented in Treviso, the province of Veneto where we were headed, and had helped to keep them awake in their battles. Later he explained the difference between DOC and DOCG proseccos.

In the United States we are more likely to find DOC bubbles that come from flatlands closer to Venice. They have a blue seal and are made from vineyards that produce up to 900 million bottles in a year.

Farther up in the foothills, though, is the Conegliano Valdobbiadene Prosecco Superiore DOCG zone of Veneto, where Glera is the primary grape grown and only 100 million bottles of prosecco are made annually. This special region is small, but its rolling landscape, climate, and pre-mountainous terroir add something quite special to the wine’s flavor—as does the tradition of harvesting by hand.

La Vigna di Sarah has the distinction of being one of the area’s only organic wineries. It is perched on the top of a hill with a bird’s-eye view of the vineyards spread beneath it, and proprietor Sarah Dei Tos has added to her business a fourth-generation gourmet chef and a bed and breakfast. Guests can sip wine in giant wine casks that have been given new life as tasting rooms, and intrepid travelers can even sleep in those that have been remade into bedrooms.

We opted to taste our proseccos in the shaded garden while Therese Jonsson offered us some savory snacks from Michael Esposito’s gourmet kitchen. She described in more detail why these foothills are so special to the wines they produce.

“The energy of the ground is different here,” she said. “The sun, the moon, the hills are fantastic, and that is why DOCG prosecco is different. At the base of the Dolomites, the mountain air comes down and meets the sea air coming from the Adriatic. Perfect.”

Mountainous rainwater adds minerals to the grapes, while humid sea air helps them to grow on vines that are up to 100 years old. They may produce fewer grapes, but those they do yield superior flavor that results in the high-quality proseccos made here.

Another secret of this vineyard is that they make the only bubbles in the world to come from grapes harvested by full moonlight in early September. The cool night air locks in the flavor and aroma of the grapes and prevents their early fermentation. To us, it was like drinking ethereal moonlight.

Continuing along the Prosecco Road past Revine Lake, we took in the small, quiet villages. Here prosecco is the main industry, and life remains traditional. It made sense that our next visit was to a family vineyard that has been making wine for 54 years.

Cristina Gatto welcomed us on a tour of the Campion cellars where her brother, educated at the prestigious Conegliano’s School of Oenology, is the winemaker and only 170,000 bottles are produced each year. We saw the old cement casks where her grandfather made prosecco and the steel tanks that they use now. In one area of the cellar hung packages of sopressa, a cinnamon-spiced salami that we found to be a marvelous complement to our tasting.

Outside again, Gatto walked with us to the family’s vines and reverently touched one that she said was at least 85 years old. Next to it was a baby that she smiled at indulgently; it won’t be able to produce fruit for three years, but it is the future of Campion. Gatto said that they never clear an entire vineyard—they only replace what dies naturally and keep the old vines as long as possible.

“We want to preserve our land and our tradition,” she explained.

Later, as she poured wine and offered us snacks, Gatto extolled more benefits of the undulating landscape and told us that there are at least 10 microclimates on their property alone. It is from those that her family selects their best grapes to become Cartizze, the champion of proseccos.

“My brother is able to perceive the different personalities of our land; he can taste the shadows.”

There is no public transport available to reach the vineyards in the UNESCO World Heritage area where DOCG prosecco is made. One must hire a guide or rent a car. But without Rossano, we would have missed out on understanding that tradition so special here. Like the winemakers, he speaks of the vines, the grapes, the land, and the wines with a special tenderness. It was his skilled guidance that allowed us to taste the moon and the shadows in the bubbles.