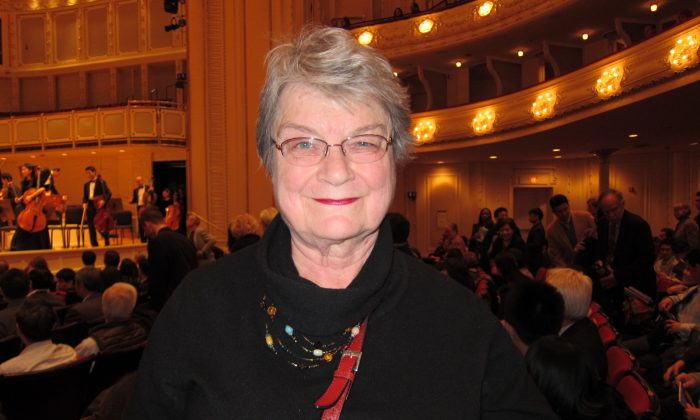 Ms. Weaver hears with a music teachers’ ear, having taught generations of Suzuki students. She attended the concert with her husband, Kennard, on Tuesday, Oct. 21.

“The Shen Yun Orchestra combines the spirit, beauty, and distinctiveness of Chinese music with the precision, power, and grandeur of the Western symphony orchestra. The result—two great traditions producing one refreshing sound,” according to the orchestra’s website.

Ms. Weaver felt the concept of combining the Eastern flavor on top of a Western orchestra was interesting, and that they have done a beautiful job performing.

The traditional Chinese music wasn’t like elevator music, like “some of the stuff that you see on quote ‘pop’ Chinese discs from mainland China.”

“There is original composition going on. I read the bios of the composers they’re using, and they’re very creative. They’re doing a very nice job, and the execution is really just immaculate,” she said.

Among the Western orchestra are the ancient Chinese instruments such as the erhu and the delicate pipa. But the orchestra plays Western repertoire, Glinka, Berlioz and Dvorak, as well.

“It’s just charming and as an orchestral musician I think they did a really good job with the standard repertoire, so they are very skilled,” Mrs. Weaver said.

She will be exploring Shen Yun’s website soon—since her interest has been piqued.

The 2014 Shen Yun Orchestra tour encompasses seven cities, with two cities remaining with Miami, on Oct. 25, and Sarasota, on Oct. 27.