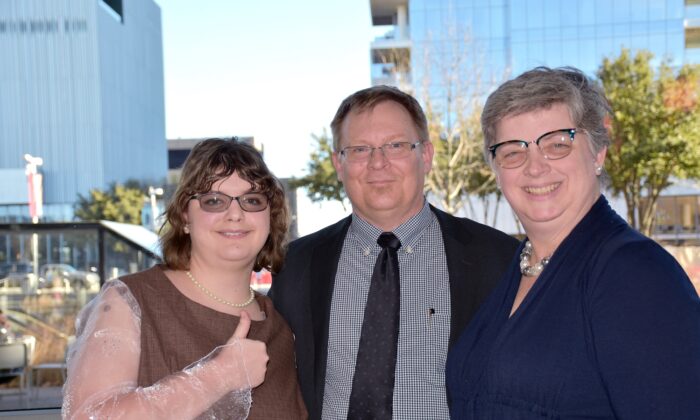 DALLAS—Who knew that two simple strings could have so much impact.

Christina Null is a professional cellist with the Mesquite Symphony Orchestra who could not help but comment on the stirring, two-stringed instrument known as the erhu, or the Chinese violin, that she saw for the first time in Shen Yun Performing Arts.

“I was simply amazed by the quality of the music and of the instruments being used,” Null said about New York-based Shen Yun. She attended the Jan. 5, 2020 performance at Dallas’s AT&T Performing Arts Center.

“The two-stringed instrument that was performed, that was very fascinating to me. I would love to learn how to play that. Maybe that is my next endeavor for a next instrument,” she said.

Erhu soloist Lu Sun performed a song on stage with live accompaniment at this year’s performances in Dallas.

According to Shen Yun’s website, “The erhu is incredibly expressive, capable of imitating sounds from chirping birds to neighing horses. An alto instrument with a middle-high musical range, its melodies can be tender or sonorous. In its lowest and middle range, the erhu is especially stirring and somber, a quality eminently suitable for conveying the grand pageant of China’s history and the emotions of its people.”

The erhu is a perfect embodiment of the spirit Shen Yun’s artists wish to share with the world: universally appealing, beautiful, profound. Their mission is to, through arts, revive China’s traditional culture and restore its spiritual essence. It does this in part by depicting stories about followers of the ancient spiritual practice known as Falun Dafa who are persecuted in China today. Some Shen Yun scenes also depict the Creator and a legend about His return to earth to save the world.

“We know of the persecution. I myself am a Christian, so we are being persecuted for Christian beliefs,” Null said.

“The vignettes, the songs really opened my eyes and were very dramatic. [Shen Yun] opened my eyes to another perspective of the world. I was very happy to see that,” she added.

Null said that the divine energy that some Shen Yun audience members report feeling touched her, too.

“It really, really takes you in. It’s like you’re the only person inside of the theater, so you could just feel the power come through the stage. It was very, very beautiful,” Null said.

Woven through the stories of Chinese belief systems such as Buddhism, Taoism, and Confucianism are universal values that people recognize as their own wherever Shen Yun travels to.

“With all-new music, and all-new vignettes and all-new dances [each year], we would love to come back and come see a new performance,” Null added.