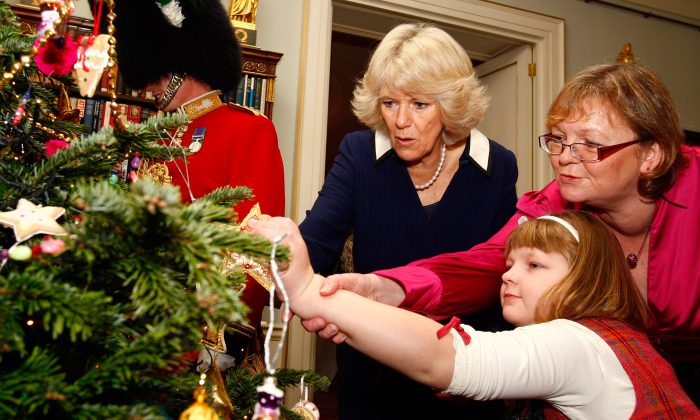 Caitlin Maj, from the Starlight Children's Foundation, is granted her wish to decorate the Christmas tree at Clarence House with Camilla, the Duchess of Cornwall. (Kirsty Wigglesworth/WPA Pool/Getty Images)
Health

Positive Impact of Wishes on Seriously Ill Children and their Families

Schemes granting wishes to children with life-threatening illnesses have a positive effect on them and their families’ well-being, according to new UK research.
The majority of the parents questioned in the study reported their children involved in wish-fulfilment events feeling more energetic, being distracted from their illnesses, and the family as a whole coping better in the short-term. Yet, it was also a poignant experience.
“During the event it’s very positive, it’s like having a significant life event, they very much enjoy it,” said Dr Anne-Sophie Darlington, senior research fellow at the University of Southampton, who led the research. “There’s a bittersweet emotion to it. They’re very happy their child is having their wish fulfilled and the family is having a great time but very sad because their child has a life-threatening illness.”
Parents also thought the wish fulfilment was an important memory for the children. One in five parents whose children had died before the start of the study felt the experience helped with bereavement.
A notable benefit was that the children were not feeling ill during the event. Darlington noted an example of a child working behind the till in a supermarket for a day.
“She had a great time. On that day, as she was experiencing that she focused on that, rather than being ill,” she said.
Darlington, who collaborated with the Erasmus Medical Centre in the Netherlands, discovered that only a minority of parents thought their child’s quality of life increased over the longer term.
However, she acknowledged that the results were influenced by the fact that the study was done years after the children had their wish come true. More research was needed to follow the families through the experience and to interview the children themselves.
The study surveyed 235 parents of children who had been granted a wish by the Make-A-Wish® Foundation in the Netherlands.
Starlight Children’s Foundation has been granting wishes for seriously and terminally ill children in the UK for nearly three decades. While chief executive Neil Swan is not surprised by the findings, he was “delighted that they conclusively show the significant value of wish granting in the treatment of seriously and terminally ill children”.
“The positive focus that a Starlight wish brings really can have a beneficial effect on a seriously or terminally ill child,” Swan said in an email.
Swan said, whether it’s meeting their favourite popstar, being a policeman for the day or even baking a cake for HM The Queen, a Starlight wish distracts a child from the pain and anxiety that they might be feeling as a result of their illness.
“It is also something that the child can share with their parents and siblings and a precious memory for them to treasure, whatever the future may hold,” he said.
Previous research also shows overwhelmingly positive results. A 2011 Wish Impact Study by the Make-A-Wish® Foundation of America found that almost all of parents surveyed reported an obvious improvement in their child’s mental and emotional health. Three-quarters of children experienced an improvement in their physical health.