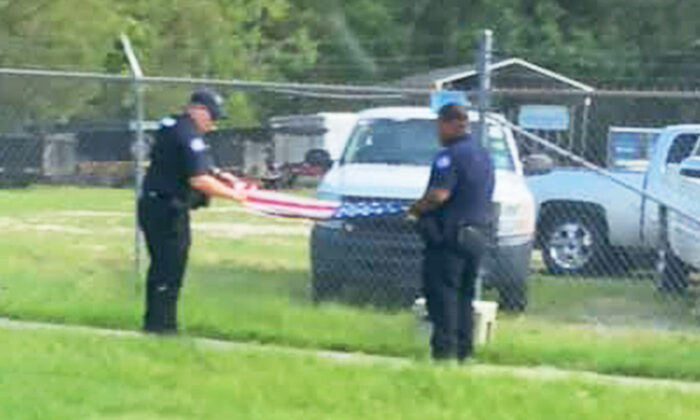 After Hurricane Ida left hundreds of thousands of Louisianans without power, and rendered over 10,000 homeless, one dad from Old Mandeville witnessed a site for sore eyes, offering some comfort.

Businessman Shane Mutter, 42, was driving with his kids along Florida Street in St. Tammany Parish, en route to check on their home, when he spotted two local sheriff’s deputies on the side of the road.

He saw that they were retrieving an American flag that had fallen from its pole onto a barbed wire fence and decided to photograph the sight for posterity.

Mutter said he felt uplifted by the deputies’ show of respect and patriotism, particularly in these “deplorable” times, as he said, “where people are looking for unity.”

The dad pointed out the officers’ example to his kids for them to learn from.

“This was a teaching moment,” he told The Epoch Times. “We must be good stewards to our children and community as they are the future leaders and should understand these lessons in life.”

They watched as the deputies stretched the fabric taut and began to fold the flag.

“I was overwhelmed by their actions and felt a real sense of pride to not only be a U.S. citizen but a citizen of St. Tammany Parish,” Mutter said, before praising the community’s leadership and calling the deputies under local Sheriff Randy Smith “amazing.”

As for the photos, Mutter posted them on Facebook, where they attracted media attention—as the dad, grasping the magnitude of the situation, thought they might.

“I had a feeling that it would be something of significance,” he said. “I was appreciative of peoples’ reactions, and [they] made me feel blessed that I had the opportunity to take this photo and share it for the world to see.”