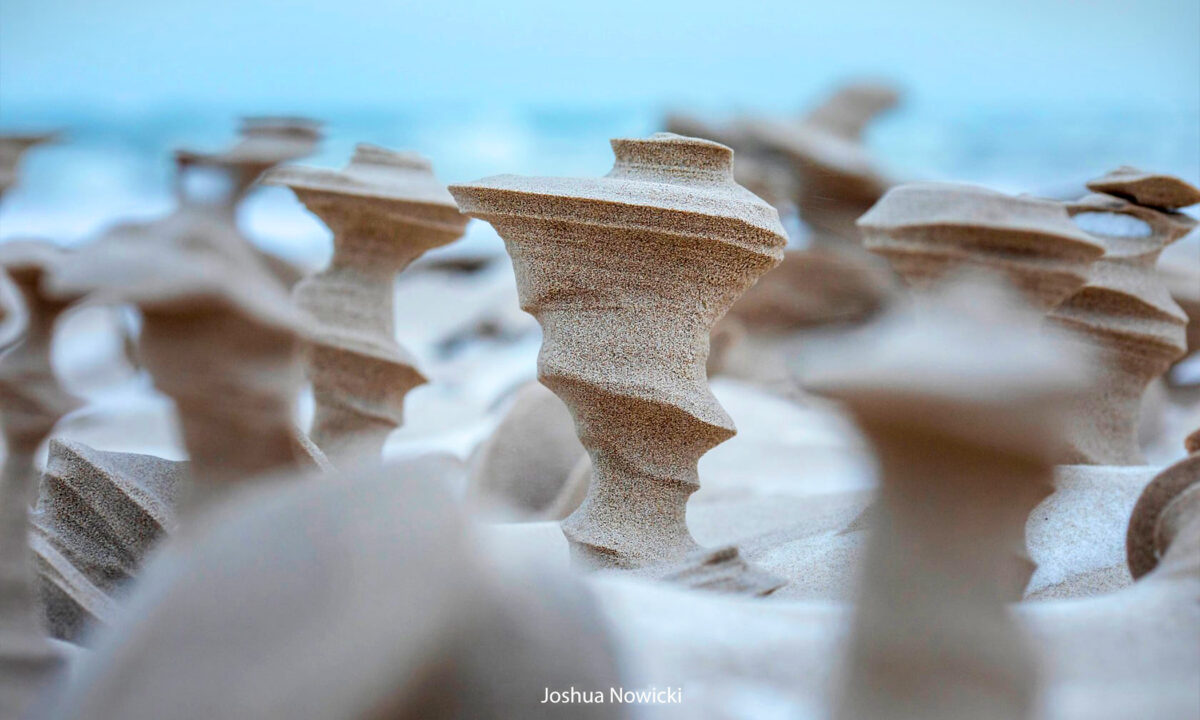 Confronted by an army of tiny, slanted pillars of frozen sand, carved by the harsh winds on the shores of Lake Michigan, nature photographer Joshua Nowicki knew he had spotted something extraordinary.

The marketing photographer, who snaps landscapes for a living, heads down to the lake almost every night in search of opportunity. This particular December evening in 2021, Nowicki stopped by Tiscornia Park Beach in St. Joseph to photograph spectacular ice starting to accumulate on the lighthouse pier, but he found something far stranger.

“Waiting for sunset, I was walking along the beach and happened upon them,” Nowicki told The Epoch Times of the otherworldly pedestals dotting the beach like some alien landscape. “I have found them a variety of times in the past … but these ones were larger than usual and there was a greater variety of shapes.”

Getting low to the ground to capture their windswept silhouettes, he took several shots of the miniature hoodoo-like sand formations that evening; he came back the next morning for more photos in a different light. “These were some of the largest ones that I have ever photographed; some being approximately 15 inches tall,” he said.”

As for what causes the tiny, tilted tables of sand, Nowicki explained that it takes a combination of moisture, temperature, and wind. “The sand needs to be wet and then it needs to freeze and then eroded by several days of strong wind,” he said. “I have found them at different times of the year, though it is a relatively rare phenomenon, after strong winds but they are usually only a couple of inches tall and crumble easily. The only way they can become larger is when the sand is frozen.”

The photographer is fascinated by the phenomenon’s ephemeral quality. “They do not last very long, usually only holding their shape for a few days,” he said. “The wind completely erodes them or knocks them over, and if the temperature goes up above freezing, the ice holding them together melts and they crumble.

“I was excited to see that they were as large and numerous as they were. I was also delighted that they were in a location where I could photograph them with the lighthouse.”

Here are a few more surreal shots and video footage of the strange sand formations taken by Nowicki in late 2021 on the shores of Lake Michigan: